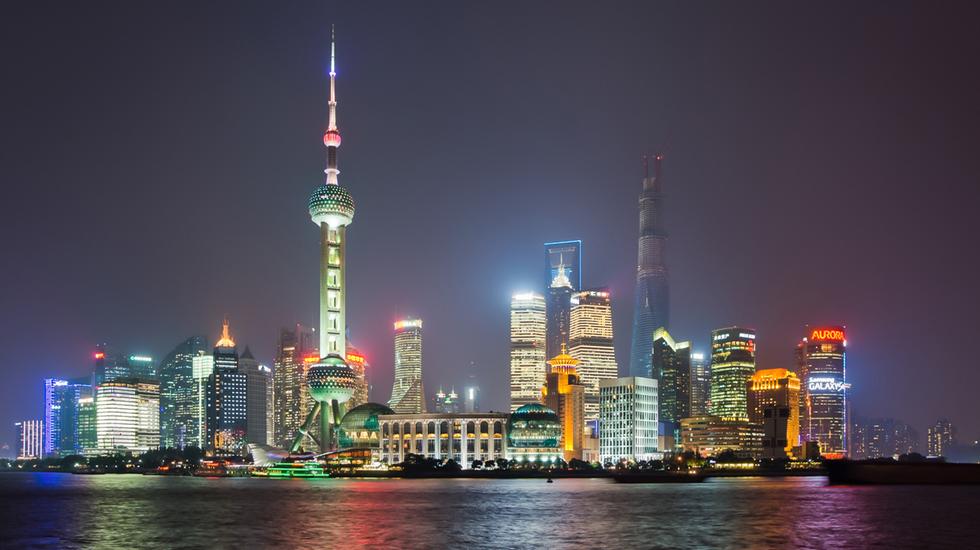 Everything Everything in Shanghai has a sense of purpose. Motorcyclists plough through pedestrian crossings, street food vendors mould dumplings by the dozen and high-rise buildings pierce the smoggy sky as though playing a particularly competitive game of SimCity. Vibrant, decadent and chaotic, Shanghai is going places and it's going places fast.

As the city's skyline races to accommodate its ever-growing population, it becomes increasingly difficult to believe that less than 200 years ago, Shanghai was just a small fishing port. It emerged as a city as the result of international commerce after the end of the first Opium War in 1842. That city is now home to nearly 25 million people, more than the entire population of Australia.

Shanghai is a city on steroids, but beneath its shiny, sky-scraping surface, there are moments in which aggressive urban development melts away into the fabric of everyday life. Swap the business district of The Bund to meander along alleys lined with enchanting Shikumen architecture, a style of 1920s housing that combines eastern elegance with western design. Explore the leafy, tree-lined avenues of the French Concession, home to art deco buildings which were once the opium-fuelled playgrounds of gangsters and gamblers. And brush past laundry billowing from bamboo poles, while trying to resist the sweet smell of sesame oil as a wok is slammed on a stove.

Seventy-two hours is not a long time in any city, but like the short history of Shanghai itself, it's possible to fit a lot in. Try your hand at sunrise tai chi, eat so much dim sum that you resemble a dumpling yourself and don't leave before purchasing the tackiest iPhone case in town. Here's how to fill three days in Shanghai with all of the time in the world:

Air France offers up to 14 flights a week to Shanghai in China via Paris, from 10 UK airports. Return fares start from £446 including all taxes and fees. For more information and to book, visit airfrance.co.uk

How to Get Around

Metro - it is cheap and easy.

Maglev trains - Shanghai's magnetic levitation trains are the fastest in the world. If you're coming from Shanghai Pudong International Airport then you can be in the city centre in 20 minutes.

Taxi - travelling by taxi is pretty cheap, but make sure you have the name of your destination written down in Chinese to avoid confusion.

Because it's always nice to know a bit of the local language and you're not going to master Mandarin in 72 hours, say 'shay shay' for thank you.

A wall of scent hits you as you step across the threshold of the PuLi Hotel - "That's lemongrass, mint and I'd have to kill you if I tell you what else," says the hotel manager. Situated on the edge of JingAn Park, The PuLi Hotel and Spa lies at the heart of Shanghai's busy commercial district, yet it is truly a world away.

Black glazed tiles line the floor of the lobby and bounce light around to illuminate all 32 metres of China's longest bar - a 'grab and go' breakfast of cereal and fruit is served in the mornings but come nighttime, visitors swap fresh juices for perfect lychee martinis. The bar leads out onto the hotel's garden terrace which is set next to a pebble-filled pool and framed by trees overhanging from JingAn park. Use the indoor-outdoor space as a sun trap over afternoon tea. A peaceful library with thousands of titles beckons guests looking for a quieter form of relaxation. All furnishings and artefacts are aligned according to the principles of feng shui.

This sense of tranquility is also felt in the 229 rooms, which are so balanced that one half almost perfectly mirrors the next. Dark wood furnishings and a neutral colour palette make for an air of understated elegance that contrasts with the cityscape that pours in through the hotel's vast window-walls. Run a bath with natural Tibetan rose-scented products and relax while you watch the city buzz beneath you. A mini bar stashed with M&M's and China's favourite white rabbit candy is complimentary, and opening a fully stocked stationery drawer genuinely feels like hitting the jackpot. Housekeeping is unobtrusive and meticulous - leave your toothbrush or makeup out of place and invisible hands will quietly set them straight.

If you're travelling from Europe, jetlag will hit you like a tonne of bricks, so make the most of your weird waking hours in the PuLi's luxurious spa and gym. Located on the third floor, the Anantara spa is a sanctuary from the city and offers a range of treatments inspired by tea, Asia's original healing tonic. Try the aromatic massage to help with sleep deprivation and follow with a pick-me-up tea in your dressing gown. If you're more into a wake-up call of light exercise, a quick gym session or a few laps in the infinity pool overlooking JingAn park should do the trick.

Once you're up breakfast will beckon. Good luck choosing from a sumptuous selection of fresh fruit - lychees, dragon fruit and pineapple - breakfast dumplings, wonton soup, cured meat and cheeses, bread, pastries and everything in between.

Paying homage to Shanghai's French influences, Chef Michale serves contemporary French cuisine with an Asian twist. Start with a salad of heirloom tomatoes, fromage blanc, basil and pine nut granola. Follow with black cod, razor clams, sweet potato and peas and then finish with the indulgent peanut butter, salted caramel and chocolate parfait. You'd be mad to miss brunch on the weekend. Like the breakfast buffet but much, much bigger, diners can either pick from a range of fresh seafood, charcuteries, roasted meats, freshly baked breads and cheeses or order from the à la carte menu. A Sunday brunch coupled with free flowing Moet or bloody marys will set you back £68.

Three on the Bund

Some of Shanghai's most opulent dining options find their home in Three on the Bund, a huge complex of restaurants and bars. For modern Korean food in a low-key setting, try CHI-Q on the fifth floor. Meanwhile on the sixth floor, the unfinished wood, exposed lightbulbs and wrought iron tables of Mercato look like a slice of Brooklyn transported to Shanghai. Serving the kind of Italian that leaves you satisfied but not full, Mercato's menu is made to share. The house-made ricotta with strawberry olive oil and grilled bread, oven roasted asparagus with fontina and prosciutto, kale and three cheese pizza.

With dimmed blue lighting, black latticed woodwork and marble sculptures, this recently-opened Shanghai spot has the hallmarks of the Hakkasan group down to a tee. The bar sits in front of Shanghai's famous skyline so order an espresso martini and watch the vast ships drift slowly down the Huangpu River, while the brightly lit tourist riverboats dash across in between. The main restaurant is known as 'the cage' but if you're dining in a group take refuge in the Ling Ling Lounge. Try the dim sum platter, roasted silver cod with champagne and honey, black truffle roast duck, jasmine tea smoked pork ribs.

Located in the heart of Shanghai's Old City, the Yu Garden is believed to have been built over 400 years ago during the Ming Dynasty. Yu means 'peaceful' in Chinese, though if you visit on the weekend the peace will probably be shattered by the hoards of tourists. Visit during the week when the crowds are calmer to take it all in. Cross the pond via the famous zigzag bridge before stopping by the Huxinting teahouse.

You might think you know Chinese food, but this walking tour around Shanghai's French Concession will unlock a whole new world. Follow your guide around local street food vendors - you'll pick up some new favourites such as jiānbǐng, savoury crepes which allegedly saved a wok-less army from starving 2,000 years ago. Untour's guides are full of facts to keep you awake throughout several rounds of dumplings: did you know that the distinct lack of raw vegetables on menus across China is in part down to an age-old proverb that states: 'only barbarians eat salad.'? Don't make the mistake of eating breakfast before!

This Soho-esque area inhabits a former industrial district and today houses a community of emerging artists whose galleries and studios are open to the public. It is also one of the only places in the city where you can see graffiti and street art on a large scale. Be prepared for the weird and wonderful - M50 has black and white portraits of Shanghai's urban development, pop art paintings of Jackie Chain and maps of China made from metal dumplings.

The most recognisable image of Shanghai is its sky-scraping waterfront business district. Yes, the boulevard is touristy but part of the fun lies in the people-watching.

This four-storey complex in the heart of Shanghai's commercial district houses a vast selections of retailers and a hotel. The central galleria is completely encased in glass and is home to luxury brands such as Loewe and Burberry as well as more reasonable options.

Tucked away down a labyrinth of narrow alleyways, this shopping enclave is alive with tourists from all over China who come to browse the area's selection of arts, crafts and candy. Located in the French Concession, Tianzifang exhibits some of the city's best-preserved shikumen architecture. The 1920s buildings buzz with teenagers giddy on neon blue energy drinks and the excitement of selfie sticks. If you're strong of stomach, amble over to the food market where there are stacks of crickets, frogs and turtles for sale.

With a terrace view over the Bund, Bar Rouge is one of Shanghai's most iconic nightlife spots. It is also the biggest consumer of Dom Perignon in Asia…enough said.

Located in Three on the Bund, the terrace of POP offers unparalleled postcard-picture views over Shanghai's famous financial district, making it a popular option for pre-dinner cocktails.

At Muse, young Shanghai locals sit around and play games of dice and order champagne for show. Miniskirts are the unofficial dress code here, chivas and green tea the unofficial house drink and EDM quite unfortunately the soundtrack.