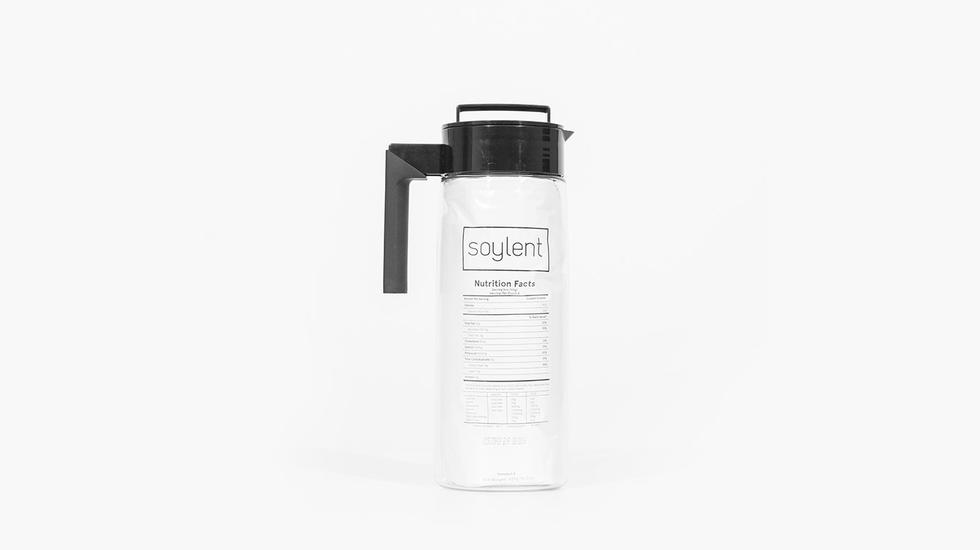 What's What's Soylent? According to the 1973 sci-fi film Soylent Green it's a highly nutritional food substitute. The movie depicts a dystopian future where food is scarce and rationing is rife. People are given a green wafer which contains everything a human needs to live. The catch is that these green wafers are in fact made from human bodies.

In 2015 (and reality), Soylent is a highly nutritional food substitute made from, well, chemicals and for the past week it is the only thing I have eaten. The company advises that this isn't the normal way to enjoy Soylent, not from a health perspective, just from sanity's point of view. To prove it's safe, Rob Rhinehart, the inventor of Soylent, has lived almost exclusively on it for the past two years. He also assures me that the name of the meal-replacement is simply a nod to the sci-fi epic.

The Los Angeles-based startup has just closed a $20 million, Andreessen-led funding round. Its vision is simple: offer an alternative to food and the alleged burdens that come with preparing it. I thought I would give it a go seeing as I despise food preparation, could do with consuming more nutrients and wanted to come to my own conclusion about all this hype.

It's cold. I'm hungry. I'm tired, typically hungrier than usual on a Monday morning. I've had a pitcher of Soylent 'resting' overnight in the fridge and a pint sized vessel which will be used to consume three meals containing everything I could possibly need for a balanced diet. Woo. I knew this was a good idea.

It tastes OK. Imagine a Starbucks Frappuccino. Now take away that taste and texture completely and replace it with raw cake batter. It has a hint of vanilla that helps it go down. Twelve hours later and three meals down, I feel fine. Have I been dreaming of food? No. Am I full? Yes. This will be a piece of cake…

Apparently Soylent gives people the ability to jump out of bed in the morning with a new lease of life. This is not the case, certainly after Day 1 at least. The thought of Soylent for breakfast makes me want to wretch. Not so much the taste, but the consistency.

I feel pretty awkward eating Soylent for lunch in public. It seems people think I'm an athlete cradling an offensively large protein shake. I guess that's better than 'Man-who-doesn't-eat-food.' Despite my new-found love of Soylent, I can't help but think that doing this long-term would be impossible.

I feel fine, I think yesterday was exaggerated. One thing I have noticed is I haven't had a cigarette since Day 2. I'm a frequent smoker, on about five a day, so this is a massive shock. What's stranger is I haven't thought about smoking at all. Is this down to the new balance of vitamins and minerals? Perhaps. There might be something in this Soylent thing after all.

I'm going through the motions now and have made the adjustment to my new diet. Drinking meals is part of my new routine and I have to say it's not that bad. Nothing new to report. The biggest benefit for me currently is the lack of washing up. Normal meal preparation is something I have just come to accept over the years. Thirty minutes in the supermarket after work followed by another 30 minutes prep time is just one of life's annoyances, but not on Soylent.

Not much to report. I'm used to it. I have since had a cigarette or three but over the course of six days that's nothing to be overlooked. I'm looking forward to weaning myself off my new best friend but I know deep down I'll be back. I can't imagine what it's going to be like having a real meal again. The anticipation itself is almost incentive enough to give up food entirely for a week. Almost.

I'm feeling smug, the same smugness I imagine a marathon runner experiences when they post their achievement on Facebook. However, my return-to-food meal lacked proper planning; my ingenious selection was a bland Pret A Manger duck wrap. I miss Soylent.

ANT ADAMS: How did the idea of Soylent come about?

ROB RHINEHART: It arose from personal need. I was frustrated with what and how I was eating and just the overall inefficiency of food preparation. So I started experimenting with what the body needed and I found a better way of getting a perfectly balanced diet.

How long have you personally be living off Soylent and what's your longest burst on just Soylent?

Exclusively Soylent, one month. I still eat for fun! Day to day Soylent makes the most sense. It's made up about 80 per cent of my diet of the last two years.

What's the future of Soylent - will it be marketed as a potential solution to solve world hunger or a consumer product aimed at minimising food prep?

We're working on a few versions - one that is low cost for the developing world and one for consumers. I see it as the future of food. The sales in the US have been overwhelming so I feel it speaks to the demand for a simple and easy to prepare food that is easy to source.

Do you believe Soylent will ever replace food on a larger scale?

In terms of the nature of the product, I actually do. I feel like it will compete with our commodity crops. It can be incorporated into all sorts of meals.

Are you not destroying one of life's pleasures?

No, I see it as a commodity crop, so in the same way wheat has a variety of uses, so does Soylent. It can be enjoyed in its purest form or the rich balance of chemicals can be used to add nutrition to other meals.

The taste isn't bad but it's hardly delicious. Are there any plans to make Soylent tastier?

We can make it taste like anything but then the nutritional value is compromised and having a singular taste gets boring quickly. Users can add different flavours to their blend - cinnamon, coffee, nutella etc.

My biggest concern is the standardisation, which is a trade-off with efficiency. Whilst everyone can live on the same chemical build, we want to understand the micro-biome better. We want to make it more convenient, cheaper and more easily distributed.