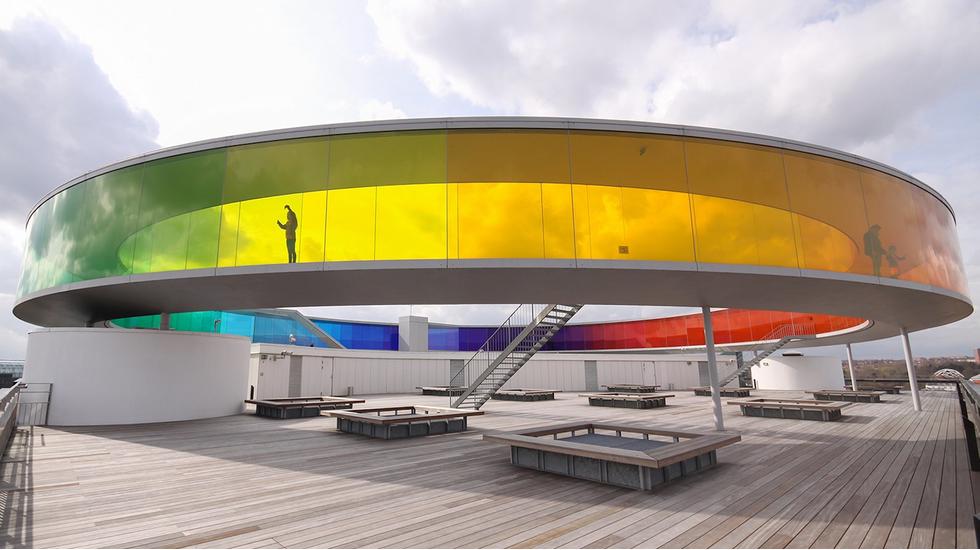 Architecture Architecture defines where we are. What is above us, below us, behind us, in front of us. Reflecting the ideology of a place at a particular point in history and demonstrating its spirit, architecture is emblematic of a city's stature in any given period.

From skylines of bravado proportions to sustainable structures, architects design buildings that will characterise cities for decades or even centuries to come. From the wallet-busting to the eco-friendly, across Bauhaus and Byzantine, we've compiled our list of 11 cities that have defied logic, mobilised communities and driven change through their infrastructure.

From Frank Lloyd Wright to Frank Gehry, famous architects of the last 100 years have contributed to Chicago's storied skyline. The Chicago School of architecture was one of the most influential of the 20th century due to their steel-frame constructions which paved the way for the world's first skyscrapers. An architectural trendsetter, Chicago's bold architectural statements have long defined it. Frank Gehry's Jay Pritzker Pavilion in Millennium Park and the Renzo Piano glass-and-light filled addition to the Art Institute of Chicago are just two examples that have led the way in lateral thought and creative design.

Located in the Himalayan foothills of northwest India, Chandigarh is the result of post-colonial politics and architectural vision. Shortly after India's partition in 1947, Prime Minister J. Nehru tasked Swiss modernist architect Le Corbusier with designing an organised, progressive city to safeguard the country's Muslim population from the Hindu majority and to break from past design traditions.

The result, a 15,000-acre complex of government buildings, housing, parks and recreation facilities that has since become a UNESCO World Heritage site. Referred to as a "planned super-grid", Corbusier's Les Sept Voies de Circulation, included exposed masonry and eccentric sculpture-work. More than one million people now live within the original city and with plenty of green spaces and cycle paths it remains one of the country's greenest cities.

An ultra-modern and luxury tourist destination during the 1920s and 1930s, the art-deco buildings of Miami's South Beach still ooze a certain elegance. Constructed between 1923 and 1943 in an effort to attract wealthy northerners to the budding resort town, architects maximised on deco's symmetrical and geometrical patterns to create low-rise, pastel-coloured buildings with curved corners.

Miami Beach's Historic District comprises the largest collection of art-deco architecture in the World. Stroll down Ocean Drive and Collins Avenue to see some of the Miami's standouts, including the lavishly decorated Vizcaya Museum and Gardens; the Faena Forum in Mid-Beach; designs by Pritzker Prize-winner Rem Koolhaas; and the curvilinear Moore Building in the Design District, which harbours Zaha Hadid's futuristic "Elastika" installation over four stories.

Astride two continents at the terminus of the Silk Road, Istanbul has been a hub of trade, power and culture for thousands of years. Illustrating Greek, Roman, Byzantine and Ottoman influence are a staggering array of monuments, palaces and towers; domed Byzantine mosques topped with fairy-tale minarets, glittering mosaic work abound.

Influenced by European style, late baroque rococo style fell unto favour with female rulers in St. Petersburg. Richly decorated, The Catherine Palace - commissioned by Catherine I and expanded by her daughter, Empress Elizabeth - is perhaps the most famous example.

St. Petersburg's architecture is dominated by baroque and neoclassical styles. Examples of the former include Saint Isaac's Cathedral, Yelagin Palace, the Imperial Academy of Arts and Mikhailovsky Palace, while the opulent Winter Palace is typically baroque.

Less dominant design periods with a prominent position in St Petersburg's composition include The Church of the Saviour on Spilled Blood that celebrates medieval Russian architecture, while the 1920s Red Banner Textile Factory is an example of Soviet architecture.

Home to the 830m-high Burj Khalifa, it's impossible not to acknowledge Dubai's design prowess. While the wind-stiffened, bellied-out sail of the Burj Al Arab hotel is arguably the most famous silhouette on the Dubai skyline, new constructions are springing up across the city. Since 2016, a swarm of major architecture firms, including Zaha Hadid Architects, Foster + Partners and Santiago Calatrava, have set up office in Dubai thanks to a Middle Eastern architecture market boom.

Constructed at an almost alarming pace, underwater hotels, rotating buildings, the black pyramid of the Raffles hotel, Dubai's skyline is in constant flux. Notable designs include the manmade Palm Jumeirah islands, which can be seen from space, and more recently the controversial Dubai Frame was opened to the public, despite an ongoing copyright dispute with architect Fernando Donis. Taking logic-defying design beyond the UAE, Danish architect Bjarke Ingels proposed a Mars simulation city for Dubai in race for space colonisation at Dubai Design week.

An economic powerhouse where prosperity has allowed cutting-edge architects to create an ultra-modern cityscape, Singapore's skyline is instantly recognisable.

Among the smallest countries in the world, the city-state has always found innovative solutions to space limitations and population size. As part of the government's overall strategy to transform Singapore into a "city in a garden" - a vision that took four years and cost $1 billion to create - Gardens by the Bay was constructed.

In contrast to the city's dense urban environment, the gardens include steel-framed "supertrees". Generating solar power, acting as air-venting ducts and harvesting rainwater, the supertrees boost Singapore's status as a green city. Other architects who have taken inspiration from nature, include Moshe Safdie's lotus-inspired ArtScience museum. Composed in a manner that provides sustainable light inside the exhibition space, the curved shape also enables rainwater harvesting as water is collected into a pond at the base of the building.

Barcelona's design milieu is due to three building booms, centuries apart. The first came at the height of the Middle Ages, resulting in one of the most extensive gothic city centres in Europe. Subsequently, the city experienced creativity from the late 1800s to the 1920s, a movement that has been revitalised again thanks to the 1992 Olympic Games.

Home to renowned architects Bjarke Ingels, Arne Jacobsen and Jørn Utzon, Danish architecture and urban planning are perennial draws to Copenhagen. During the late 1990s, architect Zaha Hadid designed the new extension of the Ordrupgaard Museum's, realised in a stunning trapezoid building with a glass facade. Obscuring the lines between structure and landscape, the structure's exterior surfaces are coated in black-lava concrete, making it look like it changes colour and texture according to the weather.

In recent years, the Scandinavian city has rejuvenated its waterfront and breathed new life into less popular town districts. Along the transformed harbour-front is the Royal Danish Playhouse, Jean Nouvel's blue cube of a concert hall DR Koncerthuset and Henning Larsen's The Copenhagen Opera House - considered one of the most modern opera buildings in the world.

Tel Aviv's "White City" contains 4,000 International Style buildings, many of which were built in the 1930s and 1940s. Constructed by German-Jewish Bauhaus-trained architects to accommodate the influx of Jewish immigrants fleeing Europe, monochromatic Bauhaus colonies were created. The Bauhaus mantra of form following function is fervently felt in Tel Aviv. The modern style's affordability and functional building techniques were quickly replicated and the non-ornamented, modernist structures remain largely intact today.

Denmark's laid-back "second city" has many charms. Streets are littered with public art and cutting-edge architecture waits on every corner. A series of complex structures have sprouted up in Aarhus East including the waterfront "iceberg" apartment building, which appears to jut up from the water in shards. Built sustainably by renovating an abandoned container terminal, the building was designed to reflect sea views.

The ARoS Art Museum is another impressive structure that experiments with texture and reflection via colourful curved glass walls to create a rainbow panorama. Created by Danish/Icelandic artist Olafur Eliasson, inspiration for the technicolor walkway comes from Dante's Divine Comedy.