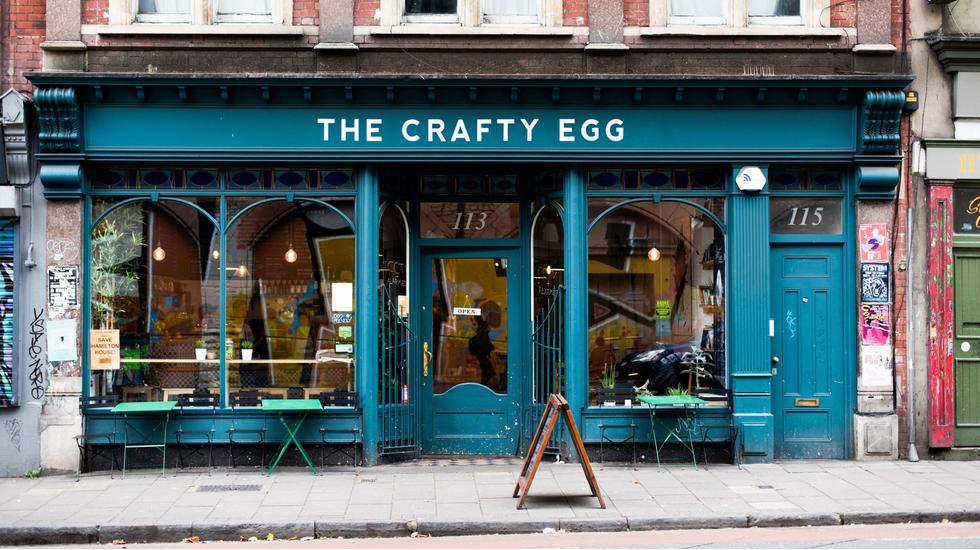 Often Often described as England's "most liveable city", there are plenty of reasons to pay Bristol a visit. An ever-evolving art movement, cutting-edge music scene, independent boutiques and, most importantly, some of the best food in Blighty puts the West Country belle at top of the list for a culture-filled weekend.

This scholarly city has seriously stepped up its culinary game in recent times, with new restaurants popping up all over town. Many of them focus on honest, seasonal ingredients and local produce plucked from the surrounding countryside. There is a sense of community among Bristol's restaurateurs, all of them passionate about the city and its future. You can practically smell the creativity in the air (though maybe that's artisanal bread), whether it's a 14-seat dining room in a waterside steel container, a field-to-fork restaurant making everything from scratch or an unassuming Scandi kitchen in a residential area.

If there's one person that captures the youthful spirit of Bristol, it's Elly Curshen - columnist, cook and owner of the tiny but mighty Pear Café. This cosy, hole-in-the-wall affair serves up steaming soups, hefty frittatas, legendary brownies and sandwiches overflowing with ingredients from the surrounding countryside. We fell for this place when Elly (also known as "Elly Pear" by her fifty thousand Instagram followers) offered us piping hot sausage sandwiches and melty butterscotch brownies as soon as we stepped through the door. Everything is made fresh in the tiny kitchen, with no space for sitting hunched over a laptop. In here, it's all about good, honest food - and a very cool owner.

Sustainable food warrior Tom Hunt is the chef behind Poco, which scooped up Observer Food Monthly's "Best Sustainable Restaurant" award a few years back and has retained its reputation ever since. Tucked away on a buzzing street corner in Bristol's art-splashed Stokes Croft district, this glowing nook serves up colourful, eclectic small plates using hyper-local ingredients and creating as little waste as possible. Expect seasonal dishes like deep-fried oysters, braised venison with mulled wine and broad-bean falafel, alongside natural wines and cocktails muddled with artisan British spirits.

Located in residential Easton, stepping inside Dela is like taking a gulp of fresh Scandinavian air. The bright, open space occupies a former art studio, with a reclaimed wooden bar stocked with natural wine and local beers, herringbone wooden floors, sharing tables topped with fresh flowers and a baby-blue tiled open kitchen. Co-owner Lara Lindsay also happens to be a talented leather maker, and you’ll find her handiwork all over the room. Dela means "to share" in Swedish, so the constantly evolving menu is all about food to squabble over, from a Scandinavian fish board (sea bass crackling, mackerel pate, hot smoke salmon terrine) to golden hasselback potatoes with goat’s curd or "top-to-tail" cauliflower. Expect Moorish flavours, the freshest ingredients and a welcoming day-to-night atmosphere.

This locally adored café is one of three outposts around Bristol. Founder Jim Pizer fell in love with India's cuisine after travelling around the country, launching a food truck at Glastonbury that would eventually become The Thali Café. Each one is bright, makeshift and welcoming, with hot-pink paint splashed on the walls, sepia-toned family portraits and hand-painted wooden signs. With a focus on sustainability and locally sourced produce, The Thali Café serves a rainbow of dishes inspired by all corners of India, from Goan beach snacks to Bombay street food. They've recently teamed up with the celebrated Indian cook Meera Sodha to create a menu celebrating India's most sizzling "hero dishes".

If an evening of American whiskey and high-grade meat sounds like your bag, head to this elegant steakhouse on St. Nicholas Street. Chomp began life as a pop-up restaurant, proving their commitment to the best ingredients to crowds of carnivorous fans. All of their meat comes from West Country butchers Walter Rose & Sons, with each cut dry-aged for around 20-30 days. The result? Some of the most succulent steaks and hamburgers in town, best washed down with one of their house cocktails. Make yours the amber-hued old fashioned made with artisan bourbon, or their very own Chomp House Brew beer by master brewery Wiper and True.

Topping list after list of Bristol’s best restaurants is Bulrush, the neighbourhood fine-dining spot that has had critics drooling over its seasonal tasting menus ever since it opened. Head chef George Livesey (who’s worked at the likes of St. John and Club Gascon) creates modern British dishes, artfully plated and created using local produce and foraged ingredients from the surrounding area. Expect local meats, West Country cheeses and organic veg alongside biodynamic wine and seasonal cocktails served in a serene room of grey wooden floors, white bricks and copper touches.

Follow the scent of freshly baked bread to the emerald-green doors of this Victorian railway arch at Temple Meads station. This constantly buzzing artisan bakery has a couple of wooden sharing tables at the front, while a flour-dusted army of bakers knead away in the open kitchen at the back. Grab a coffee and choose from an irresistible selection of sourdough toasties, sausage rolls, pasties, cakes and sticky pastries.

Bristol Harbour has become a breeding ground for experimental restaurants, with some of the city’s best chefs setting up shop on the riverside. Wapping Wharf is home to CARGO, Bristol’s first retail yard made up of converted shipping containers, and Root is a vegetable-focused fine-dining restaurant from the team behind Eat Drink Bristol fashion festival. Vegetable small plates are at the heart of the menu, with locally sourced meat and fish used to create inventive side dishes. Head chef Rob Howell works away in the open kitchen while guests sip natural wines at high sharing tables or on the wraparound terrace overlooking the water.

This sunny little restaurant shines like a beacon on a nondescript residential street in Southville. It’s been a local favourite since opening in 2015, and it’s easy to see why. The room is understated and stylish with a small bar, Formica tables, tin lights and biodynamic wine posters lining the walls. Owners Sam Leach and Beccy Massey (who are, incidentally, probably the nicest people in southeast England) get the majority of their ingredients from their field on the southern edge of the city. The “regional British” fare is simple, comforting and lovingly made, with a daily changing menu of dishes like Jerusalem artichoke and poached egg, pumpkin dumplings, sage butter and ewes’ curd, or beef shin with pickled red cabbage and potato. All go down well with a few glasses of their homemade cider. Sam is a trained butcher and baker – ask nicely and he might just wrap up a slice of sourdough with a golden slab of salty homemade butter for you to take home.

Another star of the Wapping Wharf circuit is this 14-cover modern British restaurant. It has been praised by the nation’s toughest critics for its inventive seasonal dishes, attention to detail and passion for produce. Their Cadillac of a stove (her name’s Sandra) shimmers in the open kitchen, while the stamp-sized dining space is made up of chipboard surfaces, hanging light bulbs and large windows overlooking the deck. For the full works, book a spot at one of their four kitchen counter seats, where you’ll get to watch head chef Elliot Lidstone whip up an unwritten seven-course tasting menu for £45. We recommend going in for the wine flight too.

For top-grade coffee, hot buttered toast and homemade pies, head to this Scandi-style café in Wapping Wharf. It’s the sister venue of Small Street Espresso, which is often considered the best coffee shop in town. Caffeinated locals tap away at their laptops during the day, and from Wednesday the space offers up coffee cocktails, craft beer and organic wine alongside plates from Bristol Cheesemonger and Somerset Charcuterie.

This cosy mid-century-style spot is one of the leading names on Bristol’s independent coffee circuit. Since 2013, it’s been something of an institution in the city, and owner Mat North (author of Coffee: A Modern Field Guide) is known as one of the country’s most passionate coffee experts. He has a background in physics which he brings to every cup, each made with unswerving precision using a series of intimidating glass contraptions. Grab a seat at the back beneath the stained-glass window and prepare for the shakes – there’s a handful of different blends on offer each day, and we’re pretty sure you’ll want to try them all.

While you’re perusing the street art and independent galleries of Stokes Croft, drop by this anti-supermarket which stocks a range of products from local businesses. Look out for local artwork, fruit and veg from Bear Fruit, homeade preserves, coffee from their in-house roastery and freshly baked bread. You can’t miss it, just look out for the looming purple dragon on the roof.

Right in the heart (or should we say yolk?) of Stokes Croft, this toasty café serves up heart-warming fare helped along by cheerful staff and endless cups of artisanal coffee. Pull up a window seat and choose from a locally sourced menu of toasted bagels, fluffy pancakes, “crafty” cooked breakfasts and baked eggs, washed down with spicy masala chai or craft beer.