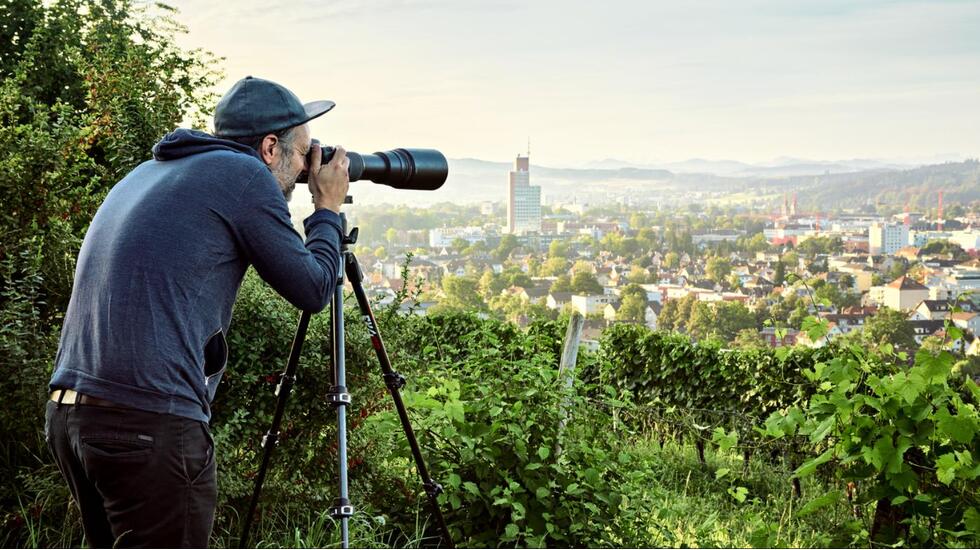 Smaller Smaller cities are an underrated delight for travellers. Sure, any visitor to Switzerland will want to see Zurich, Geneva, Basel, Bern and beyond. But if you ask any seasoned Swiss adventurer, chances are they've had their heart stolen by a smaller town or under-the-radar spot. The culture-rich, nature-abundant university hub of Winterthur is one such place, making it a stellar Swiss city-break destination.

Switzerland's sixth-largest city lies just a 20-minute train trip north-east of Zurich, and is blessed with all the ingredients for a perfect European getaway: a gorgeous, well-preserved medieval centre, a string of world-class galleries and 17 museums, an edgy and progressive culinary scene and a dazzlingly picturesque natural setting. Tourists rarely venture here, but dedicated photographers do. Here's why.

In the frame: a photographer's tour of Winterthur

Winterthur is home to arguably Europe's best photography museum, Fotomuseum Winterthur. "We show and communicate photography from the past to the present, as well as visual culture, and, together with Fotostiftung Schweiz, form the Center for Photography," says director Nadine Wietlisbach. "Events, workshops in the lab, at the exhibition and in schools are a central part of our work, so, while we attract local photographers, we also have an international reach."

Winterthur was an important industrial centre for most of the 17th, 18th and 19th centuries, and the city has been left a substantial legacy of artworks and treasures by notable merchants. The big name is Oskar Reinhart, the son of a wealthy cotton merchant, who amassed one of the 20th century's greatest private collections of art, and bequeathed the finest pieces to the nation upon his death in 1965. As a consequence, Winterthur residents have access to masterpieces by Caspar David Friedrich, Alberto Giacometti, Van Gogh, Renoir, Picasso, Holbein, Breughel, Rubens and Ingres in Reinhart's museum collections and his villa, which overlooks the city. Don't miss the Oskar Reinhart collection Am Römerholz, housing European art from the 14th to the 20th century. The Casinotheater, meanwhile, has evolved into a vital nerve centre for the German-language cabaret scene; appropriate for the nation that gave us Cabaret Voltaire and the Dadaist movement. The city's cultural calendar also offers a strong line-up of festivals, including Afro-Pfingsten, Kurzfilmtage, the International Short Film Festival and the Winterthurer Musikfestwochen festival, as well as regular performances by Winterthur Musikkollegium.

Winterthur is an inspiring subject for photographers. Its strong industrial heritage bequeathed the city incredible architecture - from grand merchant villas to industrial warehouses and cotton mills - as well as plenty of dedicated parks and gardens. Surrounding the city are castles and ancient woodland, along with attractive vineyards, plus, the city makes a great base for day trips to the Rhine Falls, Lake Constance and outings along the Töss and Rhine rivers.

Winterthur is a compact, bike-friendly city, but it also boasts Switzerland's largest and loveliest pedestrianised medieval Old Town. During golden hour - that magical time before sunset that galvanises photographers - take a wander around the gorgeous mansions surrounding the Marktgasse, visit City Church, stroll past Fisher Maiden's Fountain and capture that iconic shot of Town Hall Passage.

Winterthur has evolved dramatically from an industrial enclave to a fiercely innovative university city, with plenty of surprises in store for first-time visitors. The destination is home to one of the largest German-Swiss wineries, Rutishauser-DiVino, and a handful of local breweries. And, unlike the big Swiss cities that have to slightly pander to tourist tastes, Winterthur only needs to please its youthful, international demographic, which has led to a powerhouse of a culinary scene that belies the city's modest size. Start with Nachbarsgarten, a bohemian bistro whose divine terrace is a perfect place to photograph the young kitchen team and local delicacies, and reflect on a day viewing Winterthur through a photographer's lens.

To find out more about Winterthur, visit myswitzerland.com.