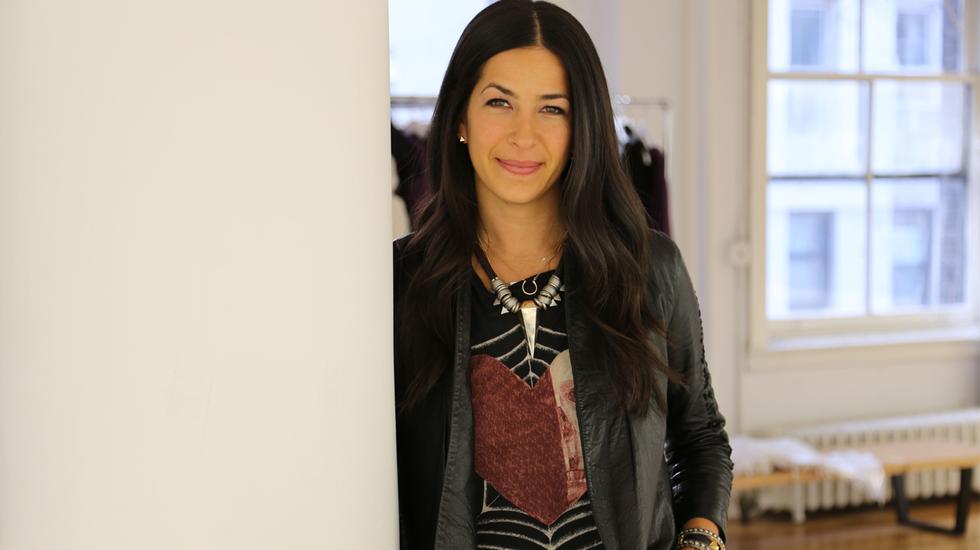 I I felt an instant calm wash over me as I entered the tranquil studio of Rebecca Minkoff on the penultimate day of New York Fashion Week, a much welcome break from the throes of chaos outside. A few minutes later, Rebecca appears. A vision of everyday elegance, she shows no signs of the stress that would normally accompany a designer who has just showed her new collection and has a young child. She had good reason to be content. Her brand has been growing from strength to strength and her very wearable 70s-inspired AW15 collection had been received well, confirming that her move back into ready-to-wear was a good decision for all of us.

SUITCASE MAGAZINE: What was the inspiration behind your A/W15 collection?

REBECCA MINKOFF: I had read Patti Smith's Just Kids and what I got from the book is that the ultimate luxury is to be young, free, in love and beautiful - so this was sort of the ode to that and transiting that luxury into luxurious fabrics. Knitwear is also something we are taking on in a big way and you can see that in these looks, which is a new category for us. SM: When you're designing do you stay in New York or retreat somewhere? RM: No my retreat is looking through the Internet. I mean I do usually go to Paris twice a year and I do a lot of my vintage shopping there and that always helps. Unfortunately I can't say: "I'm going to go to Morocco for a week and my collection will be Moroccan," I want that to be the case but with the schedule I set for design in my calendar it isn't possible. New York is an inspiring place for fashion anyway.

Your Spring Summer 2015 ready-to-wear collection involved 3D glasses and wearable technology, how did you come up with this idea?

They were two different ideas. I was researching Deborah Turbeville and what I loved was that she was known for manipulating her images the old fashioned way, so scratching her negatives, playing with them in the dark room. So I thought: "What would a modern day version of that look like?" No one had done a 3D print yet so I thought I would try it. We launched wearable technology at the same time as Apple was just about to announce their watch and we knew there would be a lot of buzz about wearable technology. So we launched the charging bracelet and the notification bracelet.

Your store also fuses a lot of fashion and technology…

Definitely. To sum it up in 30 seconds we wanted to take the best of an E-commerce experience and the best of a retail experience. So how you operate in a dressing room can be similar to E-commerce. All the clothing is tagged with RFID (Radio-frequency identification) tags and it senses what is in the room and advises you what you should pair it with. You can call a size from a room so you never need to leave it. It has four different lighting options so you can customise the lighting and you can check out seamlessly with PayPal. It is really about taking away any pain points for the customer.

Do you think it is important that designers in today's society incorporate technology?

I think it is important to do it if it helps. I don't think it is important just for technology's sake. It is important if a girl is sick of poking her head out waiting to see if an associate will help. Or how can she see everything in the store from her dressing room? So I think those are the things that as a shopper I want, so it is all about making it easier for her.

Your company has been at the forefront for social media. With social media continuing to grow and provide a platform for young and up-and-coming designers, how do you ensure your brand stays relevant?

I think we are always willing to be pioneers and push the envelope. This season for our runway show we filmed the whole show with virtual reality cameras. Which looks like a globe but it is covered in cameras, so there were three of them that we filmed with, so it is getting a 360-degree film of the show. So we partnered with Jaunt which is a virtual reality company, and they have something you attach to your phone and in two months when we release the footage you will be able to see and move to your left, right, up and down. So I think the future is something like this rather than live streaming as you can see what is in the room and feel like you are there.

SM: Do you think runway shows are still important?

I think so, maybe it has changed from it being just for a small group of people as now it is for so many more. But it gets people excited about the next season and sets trends and as long as people are shopping you have to show them clothing.

Since you created the first bag, (the Morning After Bag) your bags have developed such a cult following. Why do you think women love your bags so much?

I think there are a couple of elements: the first being that any time a woman has come up to me to thank me, it was because when she wore my product she was complimented on her style and choice and not her logo. I think our customer sees an incredible price-value ratio. The bag looks like it should be more expensive than it actually is. In the beginning we also offered a huge array of colours and styles of handbag and I think that women also appreciated that. Not only does she have a bag for a date but she has a bag for work. There are multiple occasions that are important for a woman and we had bags that fitted that.

Some old footage of my original runway show was spliced into a show on TV and we had retailers start calling saying why didn't you invite us to the show? I was like: we didn't have a show. But it got us thinking that maybe there was an appetite for people who want our clothes and I also thought we are building a lifestyle brand and we didn't want to get stuck doing just one thing and we had to diversify quickly. So it was sort of a sign that we should get back into it.

SM: New York has played such a significant role in your career, what is it about the city that is so great? Could you imagine living anywhere else?

I think that the constant energy and bumping in of creative minds, creative people, art and culture, keeps me energised. Any time I am anywhere else other than a major city like London or Paris I get really bored.

Do you think the city has changed at all?

Definitely, but for me it has changed for the better, I am not upset at the change. People who are ten years older than me say stuff like, "When I lived here, this neighbourhood had drug addicts on every corner, I miss that." I am just like why? I don't miss it.