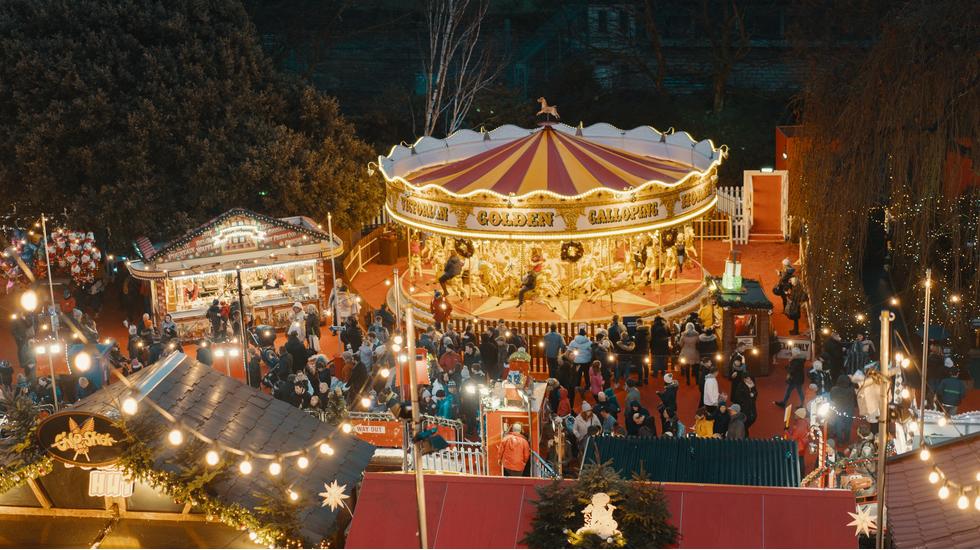 There's There's nothing like a snow dusted Christmas market to make even the biggest Scrooge feel festive. Buying handcrafted gifts from candlelit wooden stalls in snowy medieval squares, guided by a few cups of mulled wine, certainly beats doing battle with the hordes of people on the high street frantically searching for a pair of socks or a scarf. The Christmas market is a wholly European tradition, with Vienna's 'December Market' a precursor that dates back to 1294. And in many towns throughout Austria and Germany, Advent only truly begins with the opening of the Christmas market, or 'Weihnachtsmarkt'. Each market across the continent has its own individual customs, but still delivers the magic of the season that we all know and love. From sipping feuerzangenbowle in St Gallen to indulging in kiachln in Innsbruck, SUITCASE wraps up the best Christmas markets in Europe.

Get into the festive spirit at these European Christmas markets

Pack your thermals and tartan knitwear and head to the Scottish capital for some festive cheer. Edinburgh's Christmas markets can be found right in the city centre. Stalls line the gardens of the city's main high street, Princes Street, selling everything from locally made trinkets and perfect secret santa gifts to mulled drinks and warming festive food. Head to nearby St Andrew Square for ice skating, followed by a trip to one of the bar stalls for a hot toddy or a whisky cocktail.

Where to Stay: Rock House is a pretty 18th-century house hidden on the side of Calton Hill.

Germany has over 2,500 Christmas markets, but the Stuttgarter Weihnachtsmarkt is the country's oldest, largest and, arguably, loveliest. Dating back to 1692, it has some 300 stalls spread out across the car-free heart of the city. Each are bedecked with angels, sparkling lights and boughs of fresh pine in an attempt to win the coveted title of 'Best Decorated'. The fair is a treat for the ears, too, with world-class choirs and musicians performing every evening in the Renaissance courtyard of the Old Palace and on the steps of the Town Hall.

Reachable in under two hours by train from London, Brussels' christmas markets are as cute as they come. Stroll through cobbled streets to find squares brimming with wintry wonders. Pop-up restaurants fill the air with smells of freshly baked waffles and steaming glühwein, while hours can be spent browsing market stalls for stocking-fillers and souvenirs.

Where to Stay: Known for its marshmallow-soft beds, sip on Belgian beer before bedding down at Pillows Grand Hotel Place Roupe.

Dating back to 1837, Stockholm's Christmas market is relatively new by European standards, but it is no less joyful than its storied counterparts. Set up in the heart of the Old Town at Stortorget square, just round the corner from the Royal Palace, the snow-dusted red stalls sell traditional Swedish gifts with an emphasis on hand-craftsmanship. Richly spiced pepparkakor (thin ginger biscuits) and saffransbullar (saffron buns) are not to be missed, nor are the sausages made of reindeer meat (just don't tell Rudolph).

Where to Stay: Set inside an Art Nouveau building, dine on Nordic cuisine and park yourself at the bar for expertly blended cocktails at Miss Clara.

Dating back to the 13th century, Viennese christmas markets are dotted throughout the city when winter rolls around. Let the smell of roasted chestnuts lead you down side streets where rows of festive stalls are packed with artisanal knick-knacks, mulled drinks and tasty treats. In front of City Hall, the largest of the markets often has spaces dedicated to curling, ice skating and reindeer rides.

Where to Stay: Avant-garde art, rows of potted plants and Crosley record players prove Max Brown 7th District slots in naturally to the neighbourhood it is named after.

"The city of stars is what the people of St Gallen call their home during Advent - no less than 700 star-shaped illuminations twinkle over the UNESCO-protected Old Town. The festive fun starts with the lighting of the tallest Christmas tree in Switzerland, accompanied by carol singing. The market itself is small but sweet, with around 70 huts serving biberli, a marzipan-filled honey gingerbread, and feuerzangenbowle, a warm drink made by setting a rum-soaked sugarloaf on fire and catching the drips in a glass of mulled wine.

Where to Stay: Set in a historic building, Gasthaus Krone Speicher Boutique-Hotel offers pastel-hued rooms with iconic views over the mountains.

Alsace, the region in the east of France on the border with Germany, is known as the 'capital of Christmas,' and Strasbourg's 'Christkindelsmärik' has done a great deal to cement that reputation. Dating back to 1570, it's the oldest Christmas market in France, and even mention of the magnificent fir tree on place Kléber is recorded in a manuscript dated 1605. There's around 300 little chalets spread out around 12 different 'villages', or themed areas, and every year the market plays host to a special guest-country village. For 2016, traditional Portuguese Bolo Rei cake and Massa de Filhos doughnuts will be served alongside traditional Alsatian bredele biscuits - made in many shapes and flavours, such as lemon, honey and cinnamon.

Where to Stay: Book a room at the Regent Contades for a regal stay next to the River Ill, right in the city centre.

The festive cheer isn't just confined to central Europe - south of the continent has a strong Christmas market tradition, too, with Bologna a particularly enchanting highlight. The Fiera di Natale market has the 12th century San Pietro Cathedral as its backdrop, while the smaller Antica Fiera di Santa Lucia is situated in the cloisters of Santa Maria dei Servi, where it has been since 1796. Food is still the main draw, with marzipan fruits, citrus peel dipped in dark chocolate and torrone - a Christmassy nougat made with nuts and honey. Bologna is also famed for its unique Nativity crib figurines. Watch out for 'The Wonder', a woman who stands in awe of the infant Christ, and the male 'Sleeper', who lies dozing in the background.

Where to Stay: Located inside the 12th-century tower, delve into Bologna's medieval past by sleeping in the Torre Prendiparte.

Doused in Glühwein and twinkling lights, Cologne's cathedral Christmas market delivers a classic German spread. After you've had your fill of cinnamon-coated snacks and have sifted through reams of kitsch decorations, head to the market's main stage to soak up a performance of anything from swing music to gospel. Load up on schnitzel (you'll snack a lot over the course of your trip) before heading off to the Angels' Christmas Market at Neumarkt, bedecked in garlands and stars carved from wood. You'll snag a similar vibe at Saint Nicholas' Village where 60 stalls are decorated with evergreen garlands and fairy lights spreading across Cologne's Rudolfplatz.

Where to Stay: Combining past and present, Qvest Hotel pairs neo-Gothic architecture with a contemporary art and modern furniture, designed by owner of Qvest magazine Michael Kaune.

In a season of goodwill, Vilnius leads the way with its International Christmas Fair, where foreign embassy staff sell home-made gifts and cakes in City Hall Square. What Vilnius lacks in history, it makes up for with lavish decorations - the Television Tower is transformed into a massive Christmas tree with thousands of light bulbs, while a huge 3D display is projected on the side of the cathedral playing a fairytale story entitled The Christmas Dream. Sample traditional Lithuanian delights, such as raguolis, a rich batter cake cooked on a rotating spit over an open fire, and famously light poppy seed cake.

Where to Stay: Reflecting the 17th-century grandeur of Vilnius' Old Town, Hotel Pacai is set inside a 15th-century building revived with modern decor and elegant furnishings.

With the scent of toasted almonds and spices wafting all around, make a beeline for the glögg or to the pepparkakor ginger-snaps - or both - and fill your gullets to bursting. Gothenburg bills itself as "Scandinavia's Christmas city" but it's seasonal fare is worthy of top billing. After you've tired of fudge sampling, stroll through the "Lane of Light" - a 3km strip of illuminations - before working your way back to where you started. Later, hunker down by one of the market's many fire pits, watching reindeers lap the extremities of the park.

For six months of the year, Innsbruck is hidden under a blanket of snow, making it the perfect place for a white Christmas. The market comprises of around 70 stalls in a beautifully preserved medieval setting, selling wooden toys and brightly coloured felt hats to a soundtrack of trumpeters performing on the 500-year-old Golden Roof. After some Kiachln - piping hot doughnuts served with sauerkraut - ride the funicular to the top of the Hafelekar for picture-postcard views of the twinkling city below.

Where to Stay: Sleek design and sophisticated decor are perfectly paired with views of the jagged, snowy Nordkette Alps at Stage 12.

A smorgasbord of festivities, Nuremberg Christkindlesmarkt turns over a crowd of more than two-million annual visitors. Located in Hauptmarkt, the central square in the city's old town, this is one of the world's most popular Christmas markets. Sampling gingerbread is mandatory, and also serves as a great souvenir. While sauntering through this snow scene, if you see a girl with blonde locks, donning a big crown and golden dress, she's not a hen party straggler - she's the Christkind. Those lucky enough to spot her can rest easy in the knowledge that you're on the "nice" list this year.

Where to Stay: In Nuremberg's castle district, book into 14th-century, timber-framed Hotel Elch for a design-centric stay.