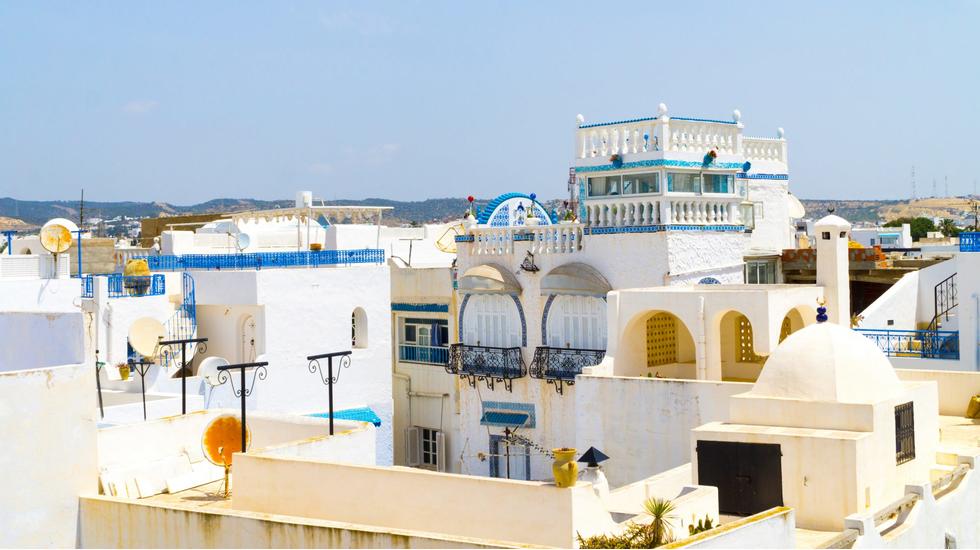 Paddle through the Sankt Anna archipelago in the summer heat, stopping on a convenient island when you get hungry or claim one for the night when it's time to pitch your tent on the mossy rocks.

Although we're sure that Georgia's capital is everything but the "new Berlin", the city's creative spirit - including a thriving fashion scene that has nurtured a generation of forward-thinking designers incorporating local culture into their work - easily rivals that of its western European counterpart.

Over a decade after the destruction of Mostar's most famous landmark, the so-called Sloping Bridge, the city is rebuilding itself. An attraction for travellers looking for destinations off the regular tourist trail, Mostar's old town is all cobbled streets, charming cafés and laid-back vibes against a backdrop of rolling hills and rustic villas. Come here to fill your feed with images of Ottoman-inspired architecture and traditional Balkan cuisine.

Rome is known as the "Eternal City", filled with such an abundance of ancient treasures that it's impossible to focus on just one. The opening of renowned art gallery, Gagosian, a few years back; the inauguration of the Fendi Hotel and the launch of legendary Parisian nightclub, Raspoutine, means there is now more than ever to keep you amused on a break in one of Italy's most romantic cities.

You may have let the scents of herbs and spices wash over you in the medinas and souks of Marrakech, but have you considered going further east? Step forward, Tunis. Following the Foreign Office's lift on a travel ban to the North African nation, locals are keen to reintroduce visitors to their country. Visit Sidi Bou Said, a vision of whitewashed and blue buildings perched above the Mediterranean, or the cool capital of Tunis, a lively mishmash of old and new.

Jimi Hendrix visited this coastal Moroccan city in the summer of 1969, and the legacy of his trip as well as its relaxed atmosphere remains with cafés and hotels bearing the musician's name. The Atlantic breeze means it's a hotspot for surfing, kite-surfing and windsurfing too.

Many use Barcelona as a short-haul weekend destination and head straight to the beach with a beer in hand. But dig a little deeper and you'll find the city's narrow streets and cobbled squares are home to an international culinary scene, a rising number of boutique hotels and plenty of design-led concept stores.

Offering everything from rain forests to tropical beaches and state-of-the-art cities, it's almost impossible to characterise this vast country. Dance the night away to Samba beats in Rio or make your island-hopping dreams come true in Angra dos Reis, a mirage of 365 islands scattered off the Brazilian coast. Even further off the beaten track you'll find Trancoso, a former fishermen's town that occupies a small stretch of coast in Bahia, where you'll feel like you've stepped into an ethereal storybook.

Sri Lanka means lush landscapes, misty forests and tea plantations alongside peeling waves with empty line-ups and a diverse local culture. Don't miss out on some of the most scenic rail travel out there, with one of the best routes being heading east from the capital of Colombo taking you to Badulla in the hill country. If you're after a sea breeze, board the coastal train to Matara (the southern tip of the island) and soak up the views from your simple cabin.

Watch Stockholm and its inhabitants stir following a long winter slumber. There's no place better for a late-night party; clubs close at 5AM with some places stay open much later than that. Take the opportunity to pick up some Scandi-style for you and your home too.

Copenhagen has become known for impressive fashion, design and food, making it one of the world's most cosmopolitan cities. While prices may be steep, save money by booking an AirBnb, which means you can pick your host's brain for untapped insider knowledge (and have some Danish krone left over to give yourself a minimalist makeover).

Nestled in the Seven Mountains, Bergen's web of timber houses, cobbled roads and patches of greenery make strolling through its streets feel like an adventure into another era. But don't be fooled, dig a little deeper and you'll find a youthful mentality driving the city, which is also famous for street art.

A truly lovely city with a charming European attitude, Budapest comes alive after dusk when the town pulsates with nightlife. Go during the warmer months when restaurants and the legendary ruin bars overflow with people out for a good time, while the many parks and squares offer the perfect places to pass a hazy summer evening.

With days that feel like summer on the horizon, sun, sand and icy rosé are the only things on our minds. The small Montenegrin town of Ulcinj is the ultimate getaway location for kitesurfing lessons by day and dancing the night away at beach bars after dark. Pack your bikini and head to the glimmering Adriatic coast for a price that would be impossible to find seaside in Spain or Italy.

With Memorial Day Weekend marking the official beginning of summer weekends away in the U.S. at the end of May, scheduling a trip to Martha's Vineyard is a fantastic way to start off a series of beachside getaways. A less crowded alternative to the Hamptons, the island is brimming with authentic New England charm, winding biking trails and incredible waterfront cafés.

Bursting with evidence of the city's rich history, Cagliari's cobbled alleys are replete with Roman ruins, ancient churches and towering Pisan palazzi. Rent a vespa to zip through the city streets in true Italian style, stopping only for a quick espresso at any of the charismatic cafés that line the narrow roads. Beautiful beaches fringe the city's bay. While Spiaggia del Poetto is the most popular, its white sands stretching over eight kilometres, we suggest Mari Pintau, a secluded bay just a short drive beyond the main city. In the evening, head to Castello, the walled citadel perched on a hilltop overlooking the city. What appears to be a sleepy neighbourhood comes alive when the sun goes down. Locals at bars, cafés and restaurants spill out onto the street, enthusiastically directing tourists towards their favourite boltholes. Go in June and you'll see countless numbers of flamingos - Cagliari is a resting point for the pink birds in their migration route between Europe and Africa.

Sat at the crossroads between Morocco's major cities, Fez has a vibrant culture that has earned it the moniker of the "Mecca of the West" and the "Athens of Africa". It's the oldest of Morocco's imperial cities, making the ancient medina here prime territory for exploring. This Unesco World Heritage Site is one of the world's largest car-free urban zones; wander through twisting lanes and dodge donkey-drawn carts to find colourful spice markets, sizzling food stalls and hidden doorways leading to rooftops overlooking the city's colourful minarets. Visit in May before temperatures peak, but when the weather is warm enough to wander around souks and gardens.

What's happening in the world in May?

Discover More
Where to Travel in April
Read now