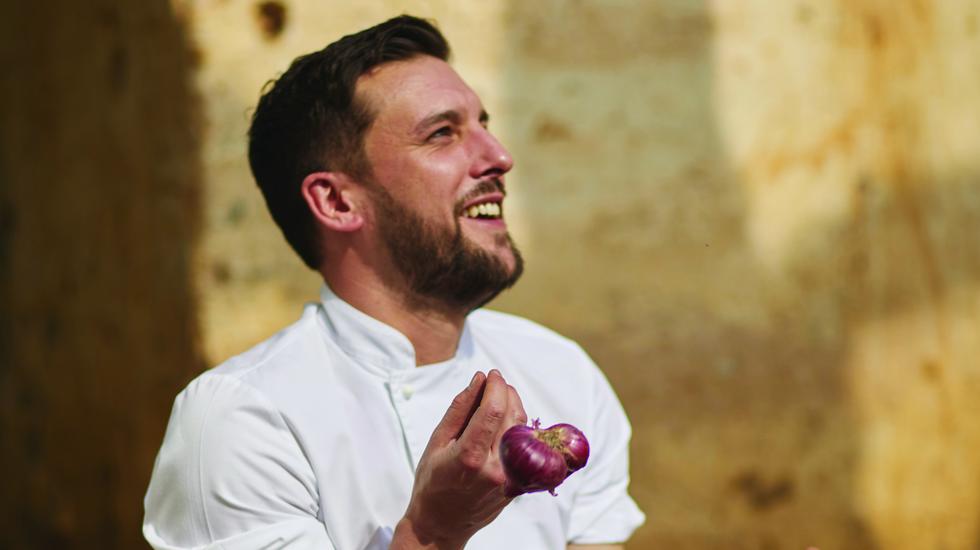 This article appears in Volume 33: Collective.

We're exchanging tales from our travels across India. Me as a wide-eyed backpacker and Theo as one of 11 chefs chosen by the champagne house Krug to unpeel the history of its ingredient of the moment: the onion.

Each year, a cohort of chefs and Krug lovers come together to celebrate the act of elevating the simple to the sensational, much like the humble grape is transformed into a glass of champagne. In the past, this exploration of single ingredients has seen peppers, mushrooms, potatoes, fish and eggs put on a pedestal. Now, it's the turn of perhaps the most elemental of ingredients. Grown and used in multiple ways across the world, onions form the base of sauces, marinades and curries. In Asia, the chefs would discover the multi-layered vegetable's origin.

This year, it's not just the onion stepping up to the proverbial plate. Theo dwells on his first invitation into the Krug family. "I was a bit starstruck," he says. "I was on a rooftop in Jaipur, sharing cooking stations with some of the world's best chefs - Tristin Farmer, Simon Davies, Hiroyuki Kanda, Heiko Nieder, Ciccio Sultano. Though once we sat down and talked, I realised we share a common goal: to feed people and make them happy."

In their journey to unearth the history of the onion, the group of chefs descended on Samode in north India in time to celebrate Holi before gorging on feasts home-cooked by local families and farmers. Farther south in Jaipur, they would devour bowls of dal baati churma as they wandered among street-food stalls.

When pressed on whether there were any wild anecdotes from the trip - after all, the Krug Grande Cuvée was flowing - Theo laughs coyly. "No, it was professional at all times." It's not the first time I've seen this camaraderie that is defining the next generation of culinary greats; it feels worlds away from the heyday of Gordon versus Marco and Anthony Bourdain versus, well, everyone.

It was the most mind-blowing thing I’ve ever eaten.

Big-name chefs are no longer working in silos in vain pursuit of a constellation of Michelin stars at the helm of prestigious kitchens. Instead, they're part of teams that forge relationships both in and out of the kitchen. Food-focused expeditions such as Krug's Chef Encounters trip help strengthen these connections.

"I hit it off with Angus McIntosh from The Farm at Brush Creek in Wyoming," Theo continues, his voice becoming more animated as he reveals his plans to travel to the US as McIntosh's guest chef. "Angus grows all his own veg. He said: 'send me the dishes you want to cook three to four months in advance, it'll get my growers on it."

The pandemic may have some collaborations on pause, but the cooperative nature in which chefs now operate runs much deeper than pop-up restaurants and partnership trips. From suppliers to front-of-house staff, the community of people that puts food on our plates does so with a collective, committed passion.

So how does that passion, from producer to plate, manifest for Theo when he's in the kitchen? "I have a solid relationship with a small circle of suppliers. I can call Dan the Duck Man on Sladesdown Farm in Devon and say I need ten ducks for Tuesday, knowing I'll get the best."

Theo laughs. His girlfriend must think he's cheating, though he's just sorting out his catch of the day, "I'm on the phone to Shaun at Henderson Seafood at 5am every morning. I know which boat my sea bass or monkfish is coming from, which makes developing recipes so much easier." He pauses. "Everything starts with that main ingredient. If you're getting the best, then you need to do very little with it. Just respect it. No gimmicks. Cook it well and let the plate do the talking."

There's no denying that the past months have been incredibly tough for restaurants lumbered with curfews and Covid-compliant rules. Yet when asked about the pandemic's impact on the industry, Theo reels off examples of chefs banding together as a community. Sharing sugar and suppliers and giving each other shout outs on social, many chefs have worked hard to remain positive - and Theo is proud to count himself among them.

"We're a resilient bunch," he says. "It's tough times for everyone, but we're a team. I want everyone to survive this." Chefs coming together in times of adversity? Let's raise a toast to that.

What are your favourite restaurants in London?

Trinity is brilliant and my time working under Adam Byatt really trained me as a chef. I also have my fingers crossed that The Ledbury in Notting Hill reopens soon - I'll be making a reservation the moment it does.

Which under-the-radar spots should we try?

Kurisu Omakase in Brixton. It's run by a guy called Chris Restrepo who's Thai-Colombian. On select days each month, he serves an omakase menu to just eight people. It's not your traditional Japanese feast; it's something completely different and really exciting. I took the team there before Lockdown 2.0.

Where do you gravitate towards for post-service drinks?

We usually end up at The Wigmore or somewhere like the Horse & Groom in Fitzrovia. I like a proper pub.

Any restaurants worth visiting on a day trip?

I love what chef Tony Parkin is doing at The Tudor Room in Windsor. The food is incredibly theatrical and yet only the best possible ingredients go on his plates, just like my style of cooking. It'd be great fun to collaborate.

When you're not in the kitchen...

You'll find me scouring the stalls at Maltby Street Market in search of new produce to try. I enjoy nipping into Borough Market and Neal's Yard too.

What should we try cooking at home?

Not sourdough or banana bread, please! Homemade pasta is a fantastic recipe to try and it's a really good one to get your friends and family involved in. Put some music on and crack open a bottle of Krug - moments like that beat the run-of-the-mill baking everyone else is doing.