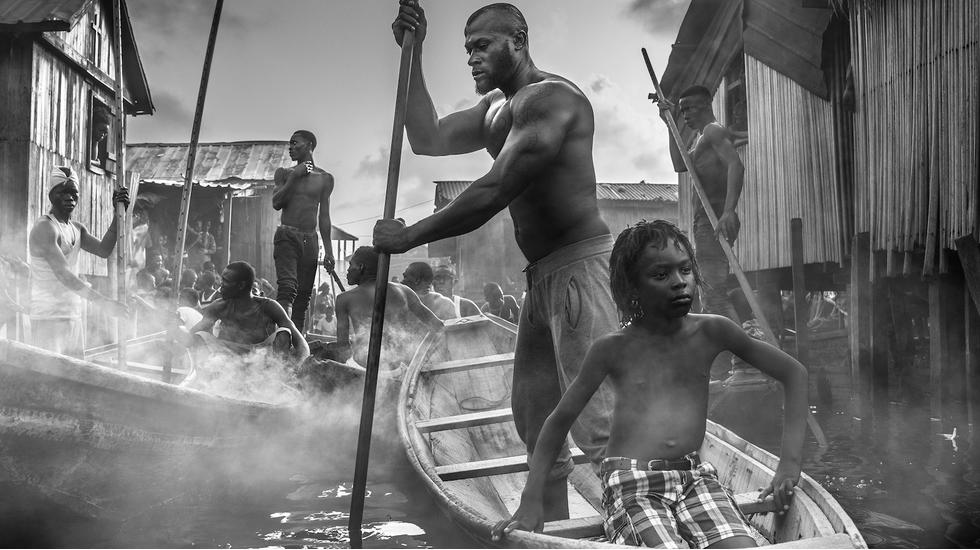 Nigeria Nigeria is a complicated place. It is refined and mannered in some areas, but dangerous and lawless in others. The neighbourhood of Makoko, a floating community in Lagos, leans heavily towards the latter. Some have named the area the "the Venice of Africa", but this label is largely ironic. Edward Burtynsky, the celebrated Canadian photographer, perhaps more aptly described it as "the hyper-crucible of globalisation".

This project started behind a desk many months before we entered Nigeria. In order to secure access to the area we made contact with the local authority, Chief Aladaton, and upon our arrival we were invited into his home. The hour-long conversation in his modest house on the edge of Makoko was one of the most surreal meetings of my life. Eventually, by showing charm, respect and a sum of money, we were given his blessing and support. At a time when everyone is a photographer, it is this kind of access that has become the key to producing ground-breaking content.

By looking at images that others had taken of Makoko, it became clear that the angle used to capture the crowded canals would determine the structure of the photograph. We toyed with the idea of an aerial view, but ultimately decided that I would need to photograph from as low a point as possible. In order to create the sense of place that I was after, I would need to get chest-deep in some of the filthiest water in the world.

The lead image from the series "A Ship Called Dignity" has attracted a great deal of comment because of its cinematic composition and lighting. I have sought to offer strong facial aesthetics and dignity as an alternative interpretation of a marginalised community. Distant analysis of less-developed areas such as Makoko can often take on a patronising tone. While my interpretation is reductive, the simplification emphatically makes the point - there is no self-pity in Makoko. During my time there I witnessed pride, physical strength and great beauty. This is what I wanted to convey.

This story is also featured in Vol. 19: The Wild Issue