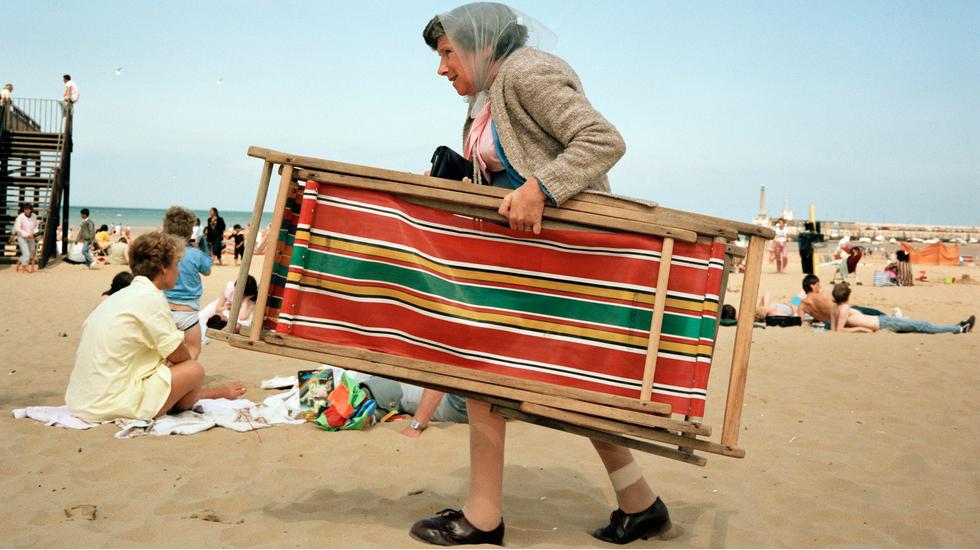 A A trip to the seaside is a quintessentially British experience. Iconic beach huts, deckchairs, buckets and spades, fish 'n' chips, hard-rock candy - all relics of a sun-shy summer spent by the sea. Dated but dotey, it was photographer Tony Ray-Jones' fear that England, in the 1960s, was losing its cultural identity to encroaching "Americanisation". His response: to turn his camera to the beaches of Britain. Travelling cross-country in a camper van with his wife, Anna, Tony Ray-Jones captured his sun-worshipping subjects spontaneously and off-guard, recording English traditions which he saw as a disappearing way of life.

Covering the country's beaches from Brighton to Blackpool, this photo series captures the customs, traditions and eccentricities associated with the British beach experience. The familiar sight of Brits determined to enjoy their day out, whatever the weather, are documented from Southend-on-Sea, Shoeburyness, Leigh-on-Sea, Frinton-on-Sea, Clacton-on-Sea to Walton-on-the-Naze.

Similarly, the self-proclaimed "aficionado of the British seaside", Martin Parr's fascination with coastal towns and beachside living, has resulted in reams and reams of photographs on the subject. Often amusing, sometimes uncomfortable and almost always beach-related. Consumed by the apparent separatism and preserved lifestyle that the coasts of Britain have from the rest of the country, Parr's photographic documentation offers viewers a glimpse at the peculiarities and absurdities of British beach culture.

The Great British Seaside: Photography from the 1960s to the present runs at the National Maritime Museum, Greenwich until 30 September 2018.