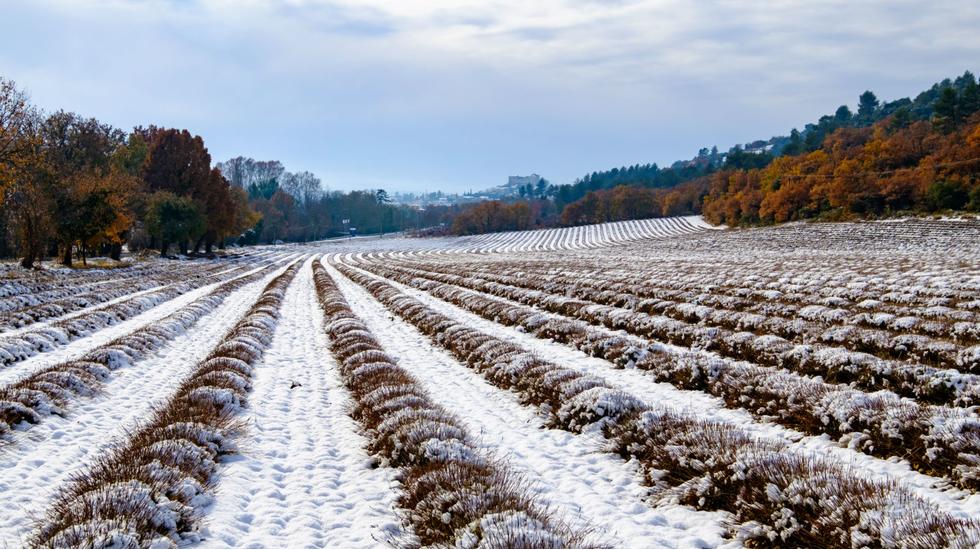 Provence Provence in south-east France is famous for the French Riviera or 'Azure Coast'. Since the 18th century, its sunny shores have been a magnet for the international jet-set who choose this stretch of the Mediterranean coast for their summer rendez-vous. For most, this part of France conjures up images of Cannes' crowded Promenade de la Croissette, sandy beaches in Saint Tropez and Monaco's flashy casinos. But Provence is a land of contrast. If you take a look from above (my partner and I are lucky enough to take regular trips in a plane known as a DR400) there are more hills and mountains than sand stripes to be seen. But that's not to say it's not just as good at ground level. In winter, when the sun is low and pale, the few rays of light create dramatic shadows on the curves of this deserted land. The peace and quiet is only disturbed by the moving reflection of clouds rolling on the surface of pristine emerald lakes. While Provence might scream summer holiday, in the colder months the area reveals a wholly different charm - here are our favourite winter spots.

The best way to discover Provence's mountainous hinterland is to fly into Nice, from which the Mercantour National Park is an easy reach to the east. Wrap up for a one-day hike in the 'Marvellous Valley', so-called due to its archaeological treasures of about 40,000 stone engravings dating back to 3300BC. A truly mystical place which couldn't feel further from the superyachts (and supermodels) of the coast.

To the north, the ski season in Alpes-de- Haute-Provence begins at the end of November but the way the French school holidays fall means that peak season isn't until February, so impeccable slopes remain relatively untouched for at least two months. The small town of Barcelonette is ideally located at the crossroads of four different ski stations, one of which is dedicated to beginners. In the 18th century, many of the region's inhabitants emigrated to Mexico in Latin America to trade textiles who made a fortune abroad before returning to the Alps where they showed off their newly acquired wealth by building imposing villas… Mexican style. Château des Magnans is one of those quirky architectural legacies dotting the landscape. Just ten minutes from Barcelonette, this strange castle is open to visit during the French holidays and doubles up as a four-star hotel with spa from mid-December.

Just an hour by car from Barcelonette you'll find Gap-Tallard airport nestled in the mountains at 1966ft above sea level. Pull up at pew at restaurant Le Looping, popular among paratroopers, gliders and propeller plane pilots, who come here to refuel between flights. With a clear view of the airstrips, you can tuck into generous servings of homemade local cuisine while you watch flights land and take off from the open-air terrace. If this unconventional setting has got you lusting after your own adventure, after lunch head southeast towards the Gorges du Verdon. The biggest canyon in Europe is studded with natural caves and waterfalls and if the weather allows it you can set off on an adrenaline-filled canoe tour.

Back in Nice, make your way into the La Pérouse Hôtel where you'll enjoy breath-taking views over the Baie des Anges. Access is through a concealed lift located inside a house, with lush Mediterranean vegetation surrounding each floor of the building. The roof terrace is open all year round and its viewpoint overlooking the coastline is one of the town's best-kept secrets. Save a day to stroll through the narrow streets of the old town and snack on local delicacies such as socca (chickpea bread) and pissaladière (onion pie). You may also catch the hotly anticipated Helmut Newton exhibition - showcasing the work of the German-American fashion photographer - which opens 17 February at the Charles-Nègre photography museum.

Wintertime is also truffle season and 80% of the French 'black diamond' harvest just so happens to be in Provence. The picturesque town of Grasse hosts a market devoted to the crème de la crème of mushrooms and several dog digging demonstrations, as well as all-important tastings, of course. Grasse is also considered to be the world's capital of perfume - it's the birthplace of iconic Chanel N°5 - so a visit to one of the town's numerous perfume factories is a must. The bright-yellow, iconic Fragonnard building is a wonderland for the nose, while you can also shop local cosmetic brands such as highly addictive Plaisir des Sens, so that you can bring a bit of winter Provence home with you.