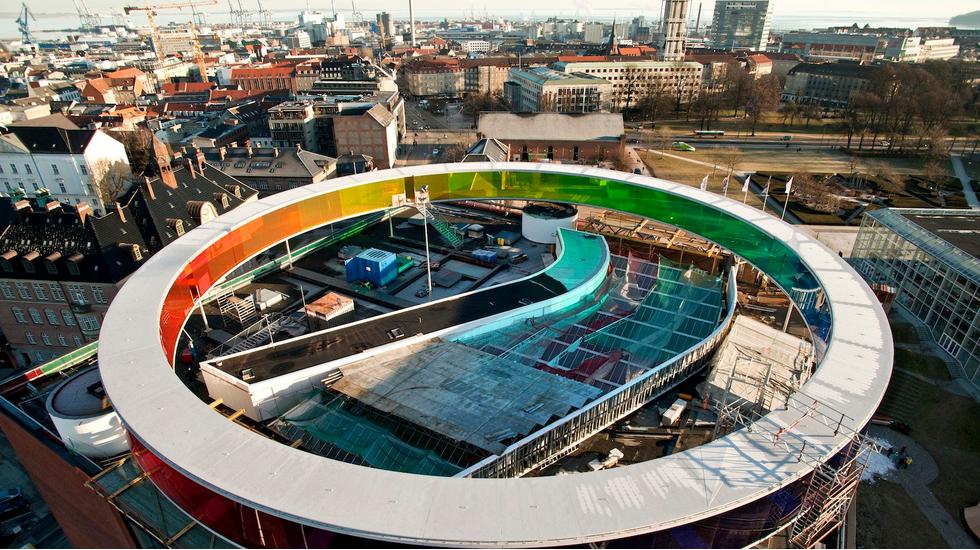 The The Iceberg's piercing white shards push up from the harbour water, some ten or more storeys high. The windows mimic their shape; glass splinters with ice blue box balconies. In Aarhus Ø, the newest quarter in Denmark's "second city", high drama meets functional living. Inside angular waterfront buildings with plunging outer walls and spiking roofs designed to look like icebergs breaking up and floating out into the blue, you'll find modern Danish apartments.

Perhaps it's a given that in a place with such dark months, architects would endeavour to make beautiful, interesting spaces for everyday living. In the harsh Scandinavian winters, the whole harbour is lit up, illuminating the new canal-veined dockland quarter at its northern tip - a concrete and brick playground for architects given a free hand. In Aarhus, this year's European Capital of Culture, the lines between urban spaces and art are intrinsically blurred.

This is evident from the area's swanky, sustainably built student accommodation to a building called the lighthouse (which spells out the word "light" from above), as well as temporary structures such as the greenhouse-style "Dome of Visions" which moves around Aarhus beach and houses everything from yoga to art exhibitions, live music and lectures on the future of architecture.

Winning Capital of Culture has brought the compact, walkable city of Aarhus - on the Jutland peninsula's east coast - into the limelight, literally brightening the grey Scandi skies and cold nights with beauty in the built environment. The formerly industrial Aarhus Ø (Aarhus East) development is becoming a key area for experimentation, while community needs have been incorporated oh-so-Danishly, such as the public flower and vegetable garden for residents and warehouses that are offices by day and spaces for book clubs and workshops by night.

It's no secret that good design is part of the Danish consciousness. Danes grow up in beautiful yet functional surroundings, with high-quality furniture, while they buy homes completely unlit so they can choose their own lighting. Just south of Aarhus Ø is Dokk 1, probably the coolest library ever with its angular exterior and, among the exposed concrete and greyscale palette, striking deep green interior walls that bring the Pantone colour chart to mind, while modern sofas face out to the water through the floor-to-ceiling windows. Children are encouraged to play freely in this space, which has been created for everyone, young and old. And it's warmly, beautifully lit. The minimal tubular bell (the world's largest) suspended from the ceiling inside is a work of art in itself and testament to community-focused Danish society in that it is rung via a button in the local hospital whenever an Aarhus baby is born. Form and function combine.

For a rather more dystopian angle, Kulbroen - Denmark's answer to the High Line - is a post-industrial former coal bridge that's been spruced with street art and hosts parties and events all summer long. Visitors are all invited to get creative themselves, and leave their own graffiti on the walls. Arriving in June is a four-kilometre visual art zone, stretching from the city and along the coast south of Aarhus to Ballehage Beach. Called "The Garden - End of Times; Beginning of Time" it will look at the relationship between people and nature over the past 400 years in an urban context.

ARoS art museum, the gallery behind the project and where some of the art will be housed, is perhaps the pinnacle of Aarhus's urban architecture-meets-art magic. The interior is less of a blank canvas on which to display art, more of a conceptual space itself. Based on Dante's Divine Comedy, there's a black-walled hell in a basement of dark corridors, disconcerting mirrors and an abandoned club space with neon lights, a fallen disco ball and empty booze bottles. As you go up and up, you travel through purgatory, with constantly changing exhibitions, up to a permanent Old Masters collection on the eighth floor and finally up into heaven: a huge coloured-glass rainbow walkway 50 metres up on the roof, with views stretching across the city. This epic 150metre-long, 400-ton glass rainbow panorama took a year and a half of strengthening the building below to accommodate, and is a reference to Bifröst, the bridge to the realm of the gods in Norse mythology. Olafur Eliasson, a Danish-Icelandic artist - who worked with Jamie XX on the Tree of Codes ballet, performed in Aarhus in April this year - was the brains behind this epic rainbow, visible from across the city.

"It's different every time you come, depending on the weather", says ARoS's Camilla Hinge, describing how people walking through the rainbow become part of the art as they interact with it. "The rainbow is an investigation of how the colours affect you. if you're in the blue section a lot of people think it's colder than the orange section, because it's a cold colour but it's not, it's the same - so the colours affect you."

Whether or not it's real, it certainly feels like a temperature change as you move from cooler blues through to warmer indigo and violets to the reds. This immersion in civic art, a fundamental part of the city fabric, is the perfect spot for looking out over a rainbow-hued version of this beautiful little urban sprawl.