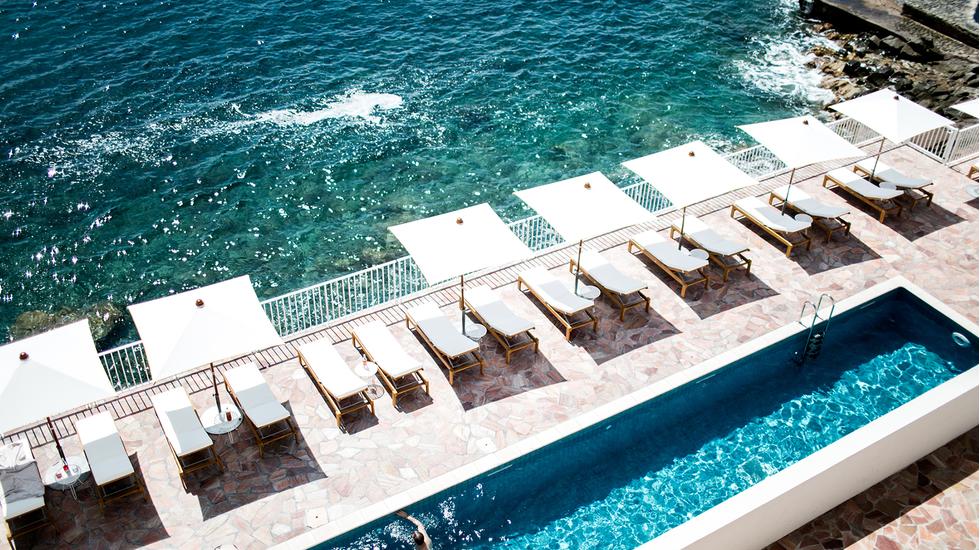 We've We've majorly eaten into our holiday fund, but aren't willing to negotiate on style, standards or surrounds when it comes to booking a week away somewhere sunny. While we may sound a) stubborn and b) deluded we are in fact c) veracious - as this shortlist spanning Modena to Athens proves.

In downtown Tulum, Casa Pueblo stands out (and not just because of its moody, patchy grey facade). Savvy travellers flock here for the hearty food, the 12ft-deep saltwater pool and the fastest WiFi in town. Although it's located two miles from the beach (hence the surprisingly low price point), Casa Pueblo has a lot to offer - including 16 hacienda-style rooms. It also makes a great springboard for exploring Tulum's Mayan ruins and cenotes.

Moped-clogged Batu Bolong feels a million miles away from the serene confines of The Slow. Its brutalist exterior is softened with tropical greenery, while inside polished concrete and wooden furnishings set a calming tone. Nailing it on the basics (but don't expect many extras), the hotel welcomes guests with its XL beds, minibars stocked with local brews and sleek bathrooms that are big enough to get lost in. Hipster holidaymakers are certain to be impressed by this eat-drink-sleep address.

In the Vera neighbourhood, tucked down a quiet side street, you'll find Rooms. Set in a former publishing house, its steel- and wooden-block structure is hard to miss. Its vibe is an eclectic mix of Soho House and every stylish Brooklynite's apartment we've ever partied at. It's a mishmash of velvet and subway tiles, slouchy sofas and Scandinavian chairs. One thing though that IDs it as uniquely Georgian: The Kitchen. The Alpuri Oqro cheese plate is on another level and the churchkhela and quinoa salad with pickled red cabbage, baby beetroot and walnuts - sublime.

As Bruges’ baby brother, Ghent is in need of a little attention. Less museum-like than its older sibling, Ghent has a large student population which means that stuffing your face with waffles and day drinking (we’re heading for The Cobbler) is entirely acceptable here. For something a little more grown up, visit St Bavo’s cathedral and gawp over Van Eyck’s altarpiece. If you’re taken by the city, why not extend your fairy-tale-filled afternoon into a weekend stay at 1898 The Post. The building, which used to be the central post office in Ghent (hence the name), leans toward the dramatic with high ceilings and turreted tops. In the bedrooms, a thematic trove of old letters and ink pots greet occupants, with rooms categorised according to size from Stamps and Envelopes to Letters.

A world away from St Tropez (in its mindset), Les Roches Rouges is closer to the Ritzy coastline than its sweet-smelling pine surrounds would suggest. Grab a seat – preferably a Hermès-orange butterfly chair – on the terrace and ogle at the gypset crowd bronzing by the saltwater pool. For a change of scene, enjoy a game of pétanque or go for a hike in the Esterel Massif. In the evening, head to any debaucherous den on the coast or remain in the comfortable confines of your hotel for a film screening at the open-air cinema.

Full disclosure: this hotel is owned by a bedding company. Suffice to say comfort levels reach their peak here. Guests can choose the type of pillow they’d like to rest their head on each night and, benefitting from a warm welcome and a fuss-free approach to hospitality, you’ll remain in a Zen-like state for the duration of your stay. The ground floor is effectively an open-plan chill zone. Feast on the all-day buffet, grabbing a spot along the pendant lit communal tables. Don’t get too comfortable (or full) though, you’ve a lot of exploring to do.

Limestone walls and green palms signal that you have reached your destination. Away from Ubud’s quirky cafés and boutiques, Stone House offers less craft-focused and more design-led accommodations. Start mornings slow with a breakfast of eggs, chopped fruit and chilled coconut water at your open-sided lodging. From your villa, you’ll spy a patchwork of rice paddies and frangipanis. Around eleven, head for a pre-lunch plunge in the hand-cut-stone pool. From there, who knows…

This downtown urban retreat has a neighbourhood feel; in fact its surrounds are the making of it. In the boho gallery district of West Queen West, The Drake Hotel delivers. Dine on a brunch of chicken and waffles, have pre-dinner drinks in the Sky Yard rooftop lounge, and dance in the Underground basement bar. Head for bed via an old brass staircase, clocking the Canadian modernist art flanking the corridors as you make moves for you room.

Hawker stalls and heritage buildings rest side by side in George Town and the Edison George Town is a prime example of this hybridised culture. The villa (dating back to 1906) is one part nostalgic stay, one part relaxed retreat. With sweeping wooden staircases and a sitting room stocked with help-yourself snacks 24 hours a day – it’s this mix of tradition and contemporary living that has us sold. That and the garden, which makes an excellent breakfast nook.

Pavarotti and Ferrari hail from Modena, but despite its rolecall of high-flying natives, the city’s hotel scene is decidedly more modest. B&B Quartopiano certainly fits the “modest” brief – the hotel founded by Alessandro Bertoni has only two rooms. Entranceway is by footbridge and the view en route to your bedroom – the Ghirlandina Tower shrouded slightly by terracotta rooftops – adds a romantic flare to check-in. Consider that B&B Quartopiano was founded by the former maître’d of Massimo Bottura’s restaurant, Osteria Francescana, it’s worth seeking Bertoni out for his food recommendations alone. A visit to his Mon Café around the corner from the hotel is also an excellent shout.