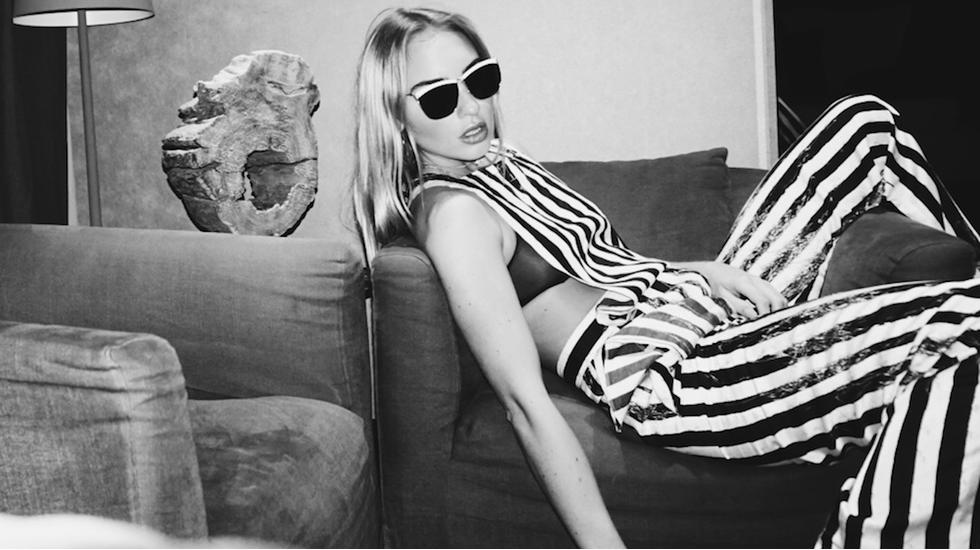 The The Canadian singer, DJ and model known as Goldilox is making waves in Paris nightlife, and she's showing no sign of slowing down. Hailing from Cape Breton, a small fishing village in Nova Scotia, and having spent time in LA, Goldilox is a long ways from her roots. Still, it doesn't take long to see that she is truly at home in the City of Lights. Describing herself as a "bit of an odd ball," Goldilox has found Paris to be the source of inspiration she needed to push herself to new levels of creativity.

"LA was sometimes tricky," she says. "I felt a separation and I would be at places and not feel like I fitted in. In Paris, it's cool not to fit in and it's cool to really do your own thing. If I'm thinking about doing something creative, there's always someone I can talk to who will push it even further than I thought."

It's not just the people that Goldilox loves about Paris. It's her ability to go anywhere in the city and immediately feel inspired. With Paris Fashion Week quickly approaching, Goldilox gave us the inside scoop on where all the cool kids in Paris are hanging out. Here are some of her favourites to help you plan the perfect Fashion Week night out...

Where would you go for an evening drink?

There's this place called George's. It's a place where you just have to go and you see people. And Miznon in Le Marais! It's really simple and serves good food.

What is a restaurant that you can't miss out on?

One of the best sushi restaurants I've ever been to is called Jin. It's pricey but amazing.

Where would you go for a drink with friends?

There's a place called Le JEUNE that only opened a year or two ago. It's a very simple, small space and there's a little club downstairs. I love basement clubs for some reason, they're always just so cool.

What nightclub is your favourite?

Well everywhere I DJ is the best! But a friend just opened up a club called Jangal. I just did my CD release party there, so it holds a special place in my heart. It's a little gritty and a really cool vibe.

Is there a spot with great music?

Well I DJ at this place called Le Carmen, and it has a really good vibe. It's also in the main area so there's a bunch of clubs and good music around there.

Where would you go for late-night food?

Publicis because they're open 24 hours.

What hotel would you suggest to someone?

Hotel Amour is really cute. If you want to ball out, go to Hôtel Costes. But I typically tell my friends to Airbnb so you can feel like you're part of the city, and then go have a drink at Hôtel Costes.

Aloha Café. I judge brunch by whether they have avocado toast. And they do.

How would you spend the day after a long night out?

I love to walk around the shops and pick up groceries. I love cooking at my place, having some friends over and watching some crappy Netflix. Just leaving the windows open and listening to the sounds of Paris is really nice.