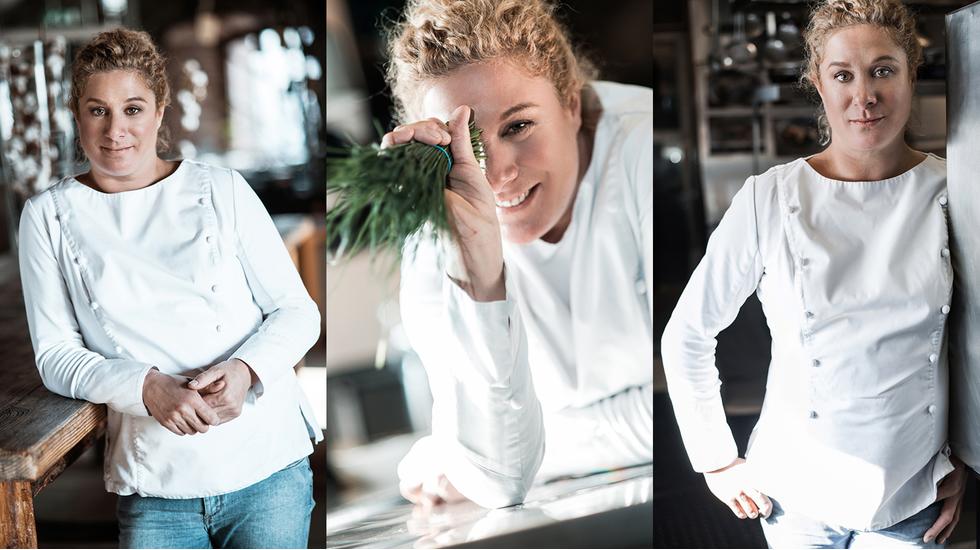 Ana Ana Roš is bound to her homeland of Slovenia by a metaphysical pull. Invisible strings keep her from roaming too far from the family homestead in the Soča Valley.

Roš has achieved a level of success that would allow her to live anywhere, to open restaurants in numerous global reaches and pursue a never-ending promotional tour of culinary endeavours, yet she remains tied to the village of Kobarid, surrounded by mountain peaks, sparkling emerald-green rivers and family. From that description alone, you can understand why.

Having put Slovenia firmly on the culinary map, international diners now scramble for a table at Hiša Franko and for the opportunity to try Roš's food first hand... and that's just the way she likes it.

"People still see Slovenia as a little province of the Austro-Hungarian Empire," says Roš. "Sometimes we have people come to the restaurant thinking, 'Who said Slovenia could have good food?' There's still a lot of education required."

In January, Roš received the World's Best Female Chef 2017 award from The World's 50 Best Restaurants, an honour she describes as, "motivation to stay in the kitchen and not forget who I am." But Roš never planned to become a chef and her path to kitchen fame has been anything but conventional.

After her husband's (Valter), parents retired in 2000, leaving their restaurant without a charge, Roš, who was three months pregnant at the time and had no formal culinary training, turned her back on a career as a diplomat and began to teach herself to cook. Valter took responsibility for sourcing and serving wine and together they travelled the world, visiting restaurants and building their dream together of a dining destination in Slovenia.

The early years were fraught with mistakes but Roš was determined to become a success. "Failure is an engine for life," she says. "If you accept that you can fail, it makes you fight harder."

Roš immersed herself in books and learned the fundamental techniques from friend, Matej Tomažic, who runs a bed and breakfast called Majerija near Slovenia's border with Austria and Italy. She and Valter continued to invest in trips around the world, marking off pillars of fine dining. They were soon accompanied by their children, Svit and Klara, who spent their formative years dining in many of the world's great restaurants. "I was breastfeeding in The Fat Duck," she recalls.

Back in Slovenia, Roš continued her studies. She met with local producers and suppliers and became educated in the land. "One of the things I'm proudest of," she explains, "is how we have built a chain of producers no one knew about 10 to 15 years ago and helped to create a sustainable market for their products."

The menu at Hiša Franko developed into a seasonal checklist of ingredients rooted in the food traditions of Slovenia, a country with a rich culinary history but also influenced by Slavic, Italian, German and Austrian cultures. It became an intensely personal menu with many ingredients grown in the restaurant's vegetable garden. Other dishes took on a more amusing disguise, such as raw deer heart tartare on a buckwheat taco, designed as a "revenge dish" and a warning to those "curious deers who dig up my garden."

Other staples such as lamb are from the neighbouring village of Drežnica and local Krskopolje pork is also sourced - the only Slovene autonomous pig breed. Roš also collaborates with conservationists, fisheries and other chefs to raise awareness of the marble trout, a species native to the rivers of the Soča Valley that is in danger of extinction, and has engaged a new audience in the process.

The Michelin Guide does not exist in Slovenia, but Roš has brought attention to her country without the need of stars and international food guides. It's taken 15 years of negotiating family and professional life to achieve the dream of a restaurant and Roš is at pains to highlight the commitment and sacrifices gone into her success, "When I work 18 hours in the kitchen I am not with my children, and when I'm with my children, my brigade, my clients and my restaurant miss me a lot," she said during her speech at The World's 50 Best Restaurants. "There's always someone missing me a lot. In the last year I realised that in the mad race to be successful and to survive, I would still put my children in the first and only place."

With the restaurant placing 69 in this year's World's 50 Best Restaurants list, a position Roš poked fun at during her acceptance speech, calling the position, "the sexiest number in the world" and her World's Best Female Chef award, Roš has earned the highest culinary accolade she could bring to her nation. Her appearance on Chef's Table thrust her into an even brighter light and her philanthropy work, during which she mentors underprivileged girls in India and cooked with recovering drug addicts in Brazil, has developed into an even greater personal joy and responsibility.

So what does the future hold for the World's Best Female Chef? "I want to keep feeding my curiosity and increase my knowledge in gastronomy," she says. "I'll continue to travel and learn about different cultures and techniques, but Slovenia's time is coming and I want to be there when it hits."

Roš continues, "I adore my home: drinking coffee at Cinca Marinca in Kobarid, close to the World War I Museum, having lunch at Topli Val in Hotel Hvala; enjoying the outdoors with my family, cycling, skiing (Roš skied for the Yugoslav national team until the age of 18) and running along the rivers, taking shade under Matajur Mountain. Maybe I'll open another restaurant one day, but it would be here, at home in this part of the world."