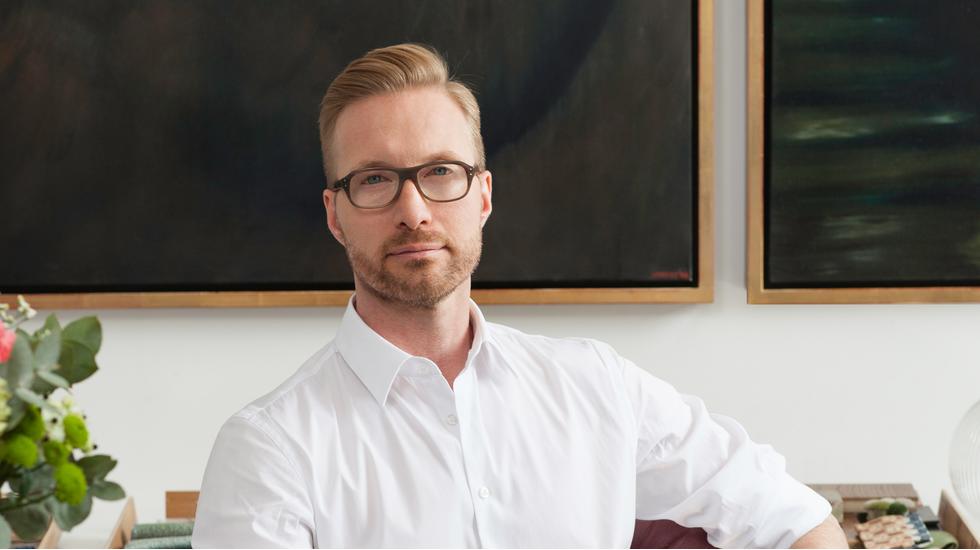 Born Born and raised just outside of Stockholm, interior designer Martin Brudnizki has a style that runs perpendicular to your average Scandi decorator.

The son of a stylist and a structural engineer - the combination of which presented him with a deep understanding of aesthetics and functionality - Brudnizki today outfits dining rooms, hotel suites and bars with a flamboyance fostered since childhood.

It's likely that you've either sat or slept in a space created by Martin Brudnziki on more than one occasion. His client list reads like a roll-call of places to be seen: The Beekman in New York, Miami's Soho Beach House, Scott's in London.

Tasked with zhuzhing up the new and endlessly hyped Annabel's at 46 Berkeley Square, he has astonished members (and their guests) with his wondrous and stylistically extreme creations. Ever veering toward the tantalizing, Dorothy-Draper end of the spectrum (the American designer was unashamedly free in her use of clashing aesthetics), Brudnizki remains ever mindful of context, constructing spaces where the interior and the locale are synced.

When it comes to holiday planning, the designer favours a curated itinerary - but is susceptible to going off-piste. In his leisure time you're likely to find him lounging around Cap Rocat in Mallorca or sipping on something citrus at the bar at Le Sirenuse in Positano.

Here, Brudnizki lets us in on his favourite spaces and places and where he garners his inspiration.

You've designed some pretty epic spaces. Which are the best?

It's impossible to say I have a favourite. However, some projects have been especially important to the studio's evolution. Working on Scott's in the mid-late Noughties marked the studio's first foray into fine-dining restaurants. It was also among the first projects we did with Caprice Holdings, who has gone on to be an important client. Soho Beach House, Miami was another pivotal project as it saw us integrate the successful Soho House brand into America; it was also our first US hotel project. Of course Annabel's, which opened last year, was one I'll never forget. Being tasked with designing the new club at 46 Berkeley Square was a privilege and a lot of fun. It was great to have so much creative freedom, allowing the team to work with amazing artisans from all over the UK.

What are your favourite hotels to visit?

These aren't necessarily my favourites but I stayed at the Cap Rocat in Mallorca last summer; it was my first visit to the island and I loved the Moorish-style architecture. On the flipside, I brought in the New Year at a sweet, old-fashioned hotel in Switzerland: Hotel Bellevue des Alpes. It's small but has amazing views across the mountains. You feel like you're a million miles away from the everyday - perhaps the most refreshing thing about a holiday location.

What makes a good hotel?

It's one that feels like a home away from home; it has to function perfectly and have an atmosphere of ease and relaxation.

How would you define modern luxury travel?

Being able to combine a sense of curated experience with spontaneity; finding new places but also having the flexibility to be adventurous and go off-piste.

The best bar in the world is…

...the bar at Le Sirenuse in Positano. The view across the town from the balcony is unbeatable.

Le Chardenoux in Paris (which you designed) is one of our favourite restaurants. What other dining spots are on your hit list?

I've never been one for going to fine-dining restaurants with starched linen tablecloths and long tasting menus - ironic for someone who often designs interiors for such places. Yet recently my partner and I have been enjoying doing a tour of them in London. We were blown away by the menu at The Ledbury. Next on our list is Galvin at Windows and Pollen Street Social.

The best places to shop for interiors?

Pimlico Road is fantastic for finding beautiful interior pieces, including antiques and objet d'art. I also love going to Brownrigg Interiors, an antiques shop in Tetbury at the heart of the Cotswolds. For fun, everyday objects such as vases, placemats and napkins, you can't beat Svenskt Tenn, a department store in Stockholm.

How does travel inspire your work?

I'm lucky to travel a lot. While I wouldn't say I actively use travel as a source of inspiration, I find I subconsciously take in details here and there and stockpile inspiration in my mind. I may unearth these thoughts months or even years later.

What is the allure in designing such exclusive spaces?

I enjoy designing interiors that can feel like a fantasy world, regardless of whether they're open to all or limited to members only. Every project I do is designed to be a place where you go to have fun, relax and unwind and leave behind the stress of everyday life. It doesn't matter if it's a private club or public restaurant, we design interiors that are inclusive and exciting.

How do your designs reflect the cities in which they are based?

Context is so important when designing a space. I strive to design interiors that feel grounded and timeless. This can be achieved through a carefully curated collection of artwork or using a colour or motif that is synonymous with the region. For the Brasserie Prince at The Balmoral in Edinburgh, all the artwork was by Scottish artists from local galleries. At the Surf Club Restaurant, terrazzo flooring anchored the design to the nearby Miami landscape. Here, we also commissioned mural artist Gary Myatt to paint a sprawling mural that created the effect of windows looking out to the ocean.

Which are your most frequented travel destinations?

I travel each month to my studio in New York, other than that my plans are somewhat dictated by regions in which I'm working - I'm currently spending a lot of time between Miami and the West Coast. The States aside, I travel mainly throughout Europe, including Switzerland, Copenhagen, Paris and Stockholm.

2019 is a busy year. I have projects across the world, including two restaurants in Azerbaijan, a restaurant and a hotel in Miami, and the regeneration of Eden Rock St Barths, which opens in November. I will also be completing an exciting retail project in Asia too.

Tell us about some creative references you return to time and time again.

Having grown up in Sweden, I was surrounded by great architecture and design. I admire the Town Hall of Gothenburg, designed by Gunnar Asplund. I referenced this in Aquavit, a Nordic restaurant in London. I have referenced a Carlo Scarpa staircase at Sexy Fish as well as drawing inspiration from Paul Dupree Lafon in my product design. When it comes to being bold with colour and pattern, I always have one of my greatest influencers in mind: Dorothy Draper, an American decorator who was unashamedly free in her use of clashing colours and patterns.

Airports often feel as though you're following a path that leads nowhere. I'd ensure there is a clear narrative and flow. I'd also improve the little details, for example, the width of a barrier. They're never wide enough to walk through easily when you have a suitcase in tow.

For a day flight: a good book and plenty of water. For a night flight: a silk eye mask and cashmere blanket. Eat before the flight and go to sleep as soon as you take off.

A selection of books as I rarely get a chance to read when I'm travelling for work along with a Panama hat - which completes any outfit. I can never leave my work behind so I always have my iPad with a stylus to draw plans and note ideas.

Discover More
Living Architecture: rent some of the most beautiful homes in the UK for a steal
Read now