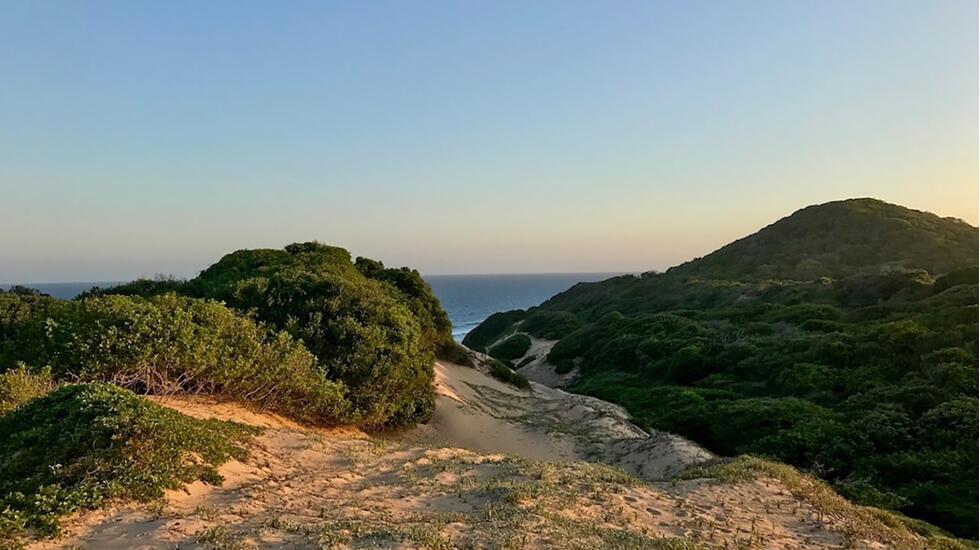 The The journey from Maputo - Mozambique's capital - to Anvil Bay can be made in several ways: by helicopter, road transfer or a self-drive trip through Maputo Special Reserve. All options are beautiful; some are simpler than others. Ever in search of a challenge, we opted to go it by road, spending four hours navigating a rickety pick-up truck through mangrove forests, lakes and grasslands, and the zebras, giraffes and elephants that call these endless plains home. They were some of the most memorable hours of my life, and likely the closest I'll ever come to feeling like Indiana Jones.

Anvil Bay is the result of a pioneering partnership between a philanthropic foundation and the local Chemucane community, which was granted a landmark ecotourism concession from the government to facilitate the joint venture. Community-built and run, the low-impact lodge has created a vital sustainable enterprise for the area, as well as being a responsible tourism destination that allows visitors to experience all of southern Mozambique's best bits in one stay. Encounters with whales, dolphins, hippos and elephants are all to be had in a day at this seriously special barefoot paradise. Get here quick.

Anvil Bay casinhas from above, left, and inside.

Tucked within the canopy of the coastal forest, all nine wooden-stilted suites (known as "casinhas") are set right on the beach, each offering views onto the lapping waves of the Indian Ocean. Inside, you'll find an elegant, back-to-basics aesthetic of hand-whittled wooden furniture (all carved in an on-site workshop), a minibar stocked with dangerously moreish, homemade rusk biscuits (refilled each day) and canvas windows that offer complete immersion in nature. Roll them up to allow a cooling ocean breeze to drift through the suite at night, then, come morning, wake to the sound of birdsong under your outdoor shower.

A healthy spread of fresh fruits, cereals and yoghurts awaits at the beach bar, plus an array of cold meats, cheeses and fresh-out-of-the-oven muffins. Hot food like eggs and bacon are available on request.

Both the lunch and dinner set menus are geared around what's been plucked from the sea that day. Expect fresh-from-the-ocean fish and seafood, grilled meats and hearty portions of salad and fresh vegetables, all served on the beach.

Yes - a toes-in-the-sand canvas tent on the shoreline, where strong coffees and even stronger cocktails are dished out from morning to evening.

Nature and the outdoors are your greatest amenities here. Borrow fat bikes and explore the 5km of pristine beach that surrounds the lodge (keeping an eye out for baby turtles during nesting season as you go), or grab a kayak, paddleboard, body board or snorkel to explore the surf and surrounding rock pools at high tide. Keen to venture further out? Join an ocean safari and take a plunge into the water - you might be lucky enough to swim alongside wild dolphins, and you'll be able to snorkel over immaculate coral reefs.

Come evening, join Jonito and Januario - two of the lodge's effervescently friendly hosts - on a traditional sunset dhow cruise across the lake. Keep your eyes on the rippling water to spot its beady-eyed resident hippos and crocodiles.

They're impressive. As little as possible has been built, in order to leave the smallest footprint on the land, and whatever exists is made from natural materials, such as the reed-and-timber casinhas. The entire lodge is solar-powered, while outdoor lighting has been kept to an absolute minimum to avoid disturbing turtles during nesting season, as well as to keep light pollution down. The lodge is heavily involved in the coastline's turtle conservation efforts, working closely alongside the Ponta do Ouro Partial Marine Reserve to monitor and protect the area's population.

Anvil Bay's most commendable effort on the sustainability front, though, has to be its support of the local community. This has largely been done through employment (80 per cent of staff who built and now operate the lodge are from the local area) and a skills-transfer scheme, as well as through the purchase of local construction materials and services. In an area that previously had little economic opportunity due to its remote location, the creation of such a sustainable enterprise is a considerable feat, and a flagship example of responsible tourism. It's a thumbs-up from us.

The hotel sits beside Lake Machai, a focus for activities.

There's no way to sugarcoat it: Anvil Bay is tricky to access. Casinhas are all set along the beach, making wheelchair access near impossible.

To get to the lodge from Maputo, you'll need to either drive or fly. Helicopter transfers from Maputo International Airport can be booked for those looking for an unforgettably stylish arrival, but if the £1000-each-way price tag won't fit your budget, we recommend taking to the road. Either book a transfer through the lodge (3-4 hours) or take the adventurous route and drive yourself through the reserve - just bear in mind that you'll need a 4X4, a GPS and a decent sense of humour.

As we visited in low season, we were lucky enough to have the entire lodge to ourselves during our stay. Friends, honeymooners and families all seem equally well catered to here - the forest-covered Library is complete with a strong set of family board games, and you'll find plenty of cosy corners for romantic seclusion, too.

If you're keen to watch humpback whales on their annual migration, visit between late July and November. Prefer to watch turtles nest on the beach outside your room? Come between October and March.

A lot. The lodge is surrounded by endless miles of unspoilt coastline, and backs out onto Maputo Special Reserve - a 1,000sq km protected area of spectacular grasslands, mangrove forests, lakes and wetlands, and of the world's most biologically rich and endangered terrestrial regions.

Visit at the right time and you'll see whales and dolphins frolicking in the spray from the shore, or take a walk along a guided savannah trail to witness the reserve's remarkable birdlife (encompassing more than 350 species).

Fancy exploring further afield? Head out on a safari game drive and you'll spot animals including zebras, giraffes, wildebeest and reedbuck, as well as Southern Africa's last remaining coastal herd of elephants. They can be shy, but if you're up early enough, you'll likely find them at their favourite morning watering hole - a sighting that's definitely worth the early start.

Doubles cost from £379 a night in low season and £446 in high season.
anvilbay.com
Discover More
Boats, Baobabs and Beachcombing: An Off-Road Expedition Through Madagascar
Read now