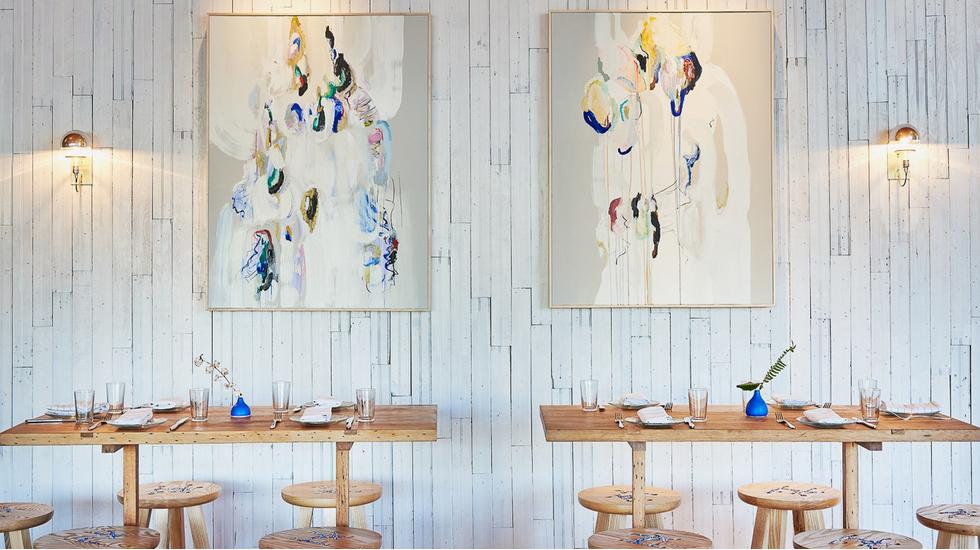 Beyond Beyond the pulse of live music and the waft of barbecue, Austin is emerging as a place where healthy living is more than just a trend. We've explored the "Silicon Valley of Wellness" to find the best plant-based and paleo eateries, restorative retreats and forward-thinking fitness studios.

Known as the "live music capital of the world" and home to some of the country's best barbecue, Austin is a creative and culinary feast amid the conservative south and, despite rapid growth, it maintains a small-town charm. Yet this artist's paradise is expanding in new directions as a boom of health-conscious businesses are capitalising on Austin's wellness-savvy residents and seemingly endless natural offerings. With over 300 parks, 30 miles of urban trails (with 50 more to come) and countless yoga studios, Austin is a dream for fitness enthusiasts. It's no wonder the city has been ranked one of the healthiest and most yoga-friendly in the United States.

As the birthplace of Whole Foods and annual host of the Paleo f(x) conference, Austin's culinary repertoire extends far beyond barbecue; it is teeming with plant-based restaurants. Given that new vegetarian restaurants are considered a classic symbol of neighbourhood change, it seems fitting that this so-called "Silicon Valley of Wellness" is also one of the country's most rapidly gentrifying cities. Nevertheless, gentrification is not the explanation here - some of the city's most beloved vegetarian restaurants have been around for decades and businesses, new and old, maintain collegial and supportive relationships. Led by enthusiastic entrepreneurs motivated by their own experiences with holistic healing, Austin's wellness community appears to be more than a trend; it's rooted in a genuine commitment to healthy living.

Locals have long known Austin's best-kept secret. Beyond the pulse of live music, Austinites can be found kayaking the peaceful waters of Lady Bird Lake, hiking and biking the Greenbelt, or recovering from the Texan sun with an exfoliation at one of several posh spas. The time is now to join them. Whether in need of revival from last night's beer and barbecue, running the festival circuit or simply spending too much time in the heat, these are the best spots for you to relax, refuel, and recharge.

Take a break from shopping Austin’s trendy SoCo boutiques at this chic all-day café set inside the South Congress Hotel. The highly ‘grammable daily brunch, with its elevated classics (hello, avocado toast topped with Aleppo carrots), all day rosé special and patio perfect for people-watching, make this the place to be and be seen on a sunny afternoon. Stay for dinner to experience chef Kendal Duque’s playful interpretations on West Coast fare such as roasted bronzini over squid ink risotto.

Mingle with Austin’s wellness crowd at this vegan food truck’s new location next to Soma Vida: a co-working space catering to the health-conscious. Curcuma has mastered the art of superfood drinks with its nourishing tea tonics, smoothies, elixirs and cacao-based coffee beverages. Creative bowls, broths and desserts are worth a try too. The must-have is the Golden Mylk, made with homemade coconut milk and its special Curcuma Golden Paste, which you can now bring home to make your own rendition of this cult favorite.

Grounded in the belief that the best recipe for restoration is plant-based foods paired with meaningful connections, Casa de Luz has been leading Austin’s wellness community for the last 30 years. Make your way past gently flowing fountains and on-site yoga classes to discover this partially volunteer-run restaurant nestled in a forest of bamboo. The vegan, daily changing set menu includes a soup, salad, entrée and dessert, all offered in what ought to be the city’s most tranquil dining room.

What began in 2013 as a repurposed shipping container on South Lamar catering to the paleo crowd, has since grown to two grab-and-go-style food trailers and a full-service brick-and-mortar restaurant. Everything is gluten, soy, corn and peanut-free, vegan- and paleo-friendly, and pretty much any modification is welcome. Don’t miss the Butter Coffee – a velvety concoction of organic coffee, grass-fed butter and MCT oil. Not to worry if you do however, Picnik’s popular beverages are now sold at Whole Foods nationwide.

You’d be hard-pressed to go a day in this city without spotting someone toting a JuiceLand smoothie. This Austin institution boasts a colourful menu of cold-pressed bottled and freshly-pressed juices, satisfying smoothies, booster shots and vegan eats. Whether you’re feeling under the weather or simply in need of a pick-me-up, the 25 locations across the city make it easy to quench your thirst.

With recycled furniture and an entirely organic, locally sourced menu that prioritises whole foods, True Food Kitchen is all about cherishing the planet. Don’t be intimidated by the plethora of appetisers, salads, pizzas, bowls, burgers and sandwiches on offer – vegan, vegetarian, gluten-free and calorie-count labels are here to help. Despite having more than 30 restaurants across the US (including two in Austin), this location’s infectiously positive atmosphere and thoughtful dishes make True Food Kitchen feel more like a neighbourhood joint.

Conveniently located next to the “Central Park of Texas”, this vegan, zero-waste food truck is the place to refuel while exploring Zilker Park. A selection of nutrient-dense beverages, bowls, tacos and salads contain 102 mineral foods known to heal the body. ATX Food Co. was born when co-owner Raad discovered he could overcome illness simply by incorporating healing foods into his diet. His enthusiasm for remedial, locally sourced ingredients results in flavour-packed dishes made with love and presented with warm hospitality.

Take refuge from the rowdy bars on Dirty Sixth in this cosy space where you’ll find arguably the healthiest Asian food in the city. Motivated by a desire to create feel-good alternatives to the overly-salty Korean dishes he grew up with, the owner has crafted a menu of MSG-free, low-salt, low-sugar Korean-ish dishes that will satisfy both your palate and wallet. We recommend a daytime visit to round out your lunch with complimentary miso soup, salad and pickled vegetables.

Flower Child entices even the least health-conscious diner with their casual, feel-good food offered in an equally uplifting space. Whether you’re a meat-eater, vegan or gluten-free, the two Austin locations offer a wide selection of wraps, salads, bowls and customisable plates that will ensure no one is left hungry. With a menu as flavourful as it is diverse, highlighting ingredients such as red japonica rice and pistachio pesto, Flower Child proves that healthy food doesn’t have to be boring.

Vibrant colours, Insta-friendly graphics and a string-light-adorned patio shaded by majestic oak trees provide an ideal backdrop for sampling Fresa’s shareable dishes. Wood-grilled meats are completed with homemade tortillas, vivacious salsas, grilled vegetables and fresh salads. While the two locations are go-to spots in the city for rotisserie chicken, its aji-glazed prawns will fool anyone into believing they’re dining seaside. Margarita fans will love the weekday happy hour from 3pm–6pm.

Set on seven hectares of lush forest overlooking the Colorado river, this spa oasis is so idyllic it will be hard to resist staying overnight. Over 100 therapy options are offered across 30 treatment areas. We recommend embarking on the Tour of Texas: an exfoliating scrub of prickly pear, followed by an agave-nectar body wrap and full-body massage. Don’t miss aqua Zumba in the pool barn and floating water meditation as part of its Wellness of Water program which boasts over 30 water-based fitness classes.

With several awards under its belt and the expansion of its fourth location in The Arboretum to be completed this year, Milk + Honey is arguably Austin’s most beloved day spa. The priority here is healing and restoration, and it’s not hard to find with a full range of massage, body, skin, waxing and nail treatments on offer. Make it a full day of pampering by stopping in at this chic location after boutique-browsing the surrounding Second Street District.

In a city as hot as Austin, saunas are hard to come by. Look no further than The Massage Studio for its infrared saunas: a dry heat so gentle it may feel cooler than outside. Here, the heat is in your control with sauna sessions customisable for weight loss, pain relief, anti-aging properties or simply relaxation. Once you’re warmed up, stay for a deep tissue massage using locally sourced lotions. Affordable add-ons such as cupping and herbal neck wraps are hard to resist.

What began as two female entrepreneurs determined to fill the void of sophisticated-yet-approachable nail salons in New York City has expanded across the country to become a celebrity favorite. You don’t have to be a wellness goddess, like regular Gwyneth Paltrow, to be treated like a queen here. The emphasis on a non-toxic environment extends beyond the products – staff are treated well resulting in impeccable customer service. You’ll want to linger in this bright and airy space, so why not get your brows, toes and waxing done too?

Escaping the Austin heat often means flocking to one of the city’s many crowded swimming holes. But for those seeking an uninterrupted float, these sensory deprivation tanks offer deep relaxation for both the body and mind. Experience euphoric weightlessness in one of four light-proof, sound-insulated floatation rooms, all larger than a typical floatation tank. The experience is elevated with complimentary robes, towels, slippers and toiletries, not to mention a 15-minute chair massage which will tempt you to indulge in one of its many massage services.

Just west of bustling downtown, a blissful hiatus awaits with 18 treatment suites, zero-gravity chairs and a rejuvenating hydrotherapy room. Fire cupping and a Turkish Hamman experience make for a globally inspired selection of services. You can find all the classics here too: massages, facials, manis and pedis, all using non-toxic products with recyclable packaging. You’ll want to return for its monthly retreats featuring seasonally inspired spa services or simply to relive the complimentary foot soak and hand and foot massage that accompanies every 60-minute service.

This national chain has three studios in Austin for you to experience the invigorating full-body workout for which CorePower is renowned. Most classes are heated to prevent injury and maximise the detoxing benefits of the practice. Whether learning the basics in a C1 class or getting your heart rate up with weights and burpees in Yoga Sculpt, you’ll always have an energising playlist and instructor to ensure you leave the studio feeling refreshed.

The first yoga studio outpost of the Wanderlust Yoga and Music Festival, the downtown location has since expanded to include another studio in the Domain, both offering a wide variety of non-heated, warm and hot classes. Beginners will love the Yoga Basics class while seasoned yogis can amp up their practice with resistance training in YoStrong and Kickass Therapeutic. Replenish after class at Blenders and Bowls, Austin’s first açaí café, located inside the downtown studio.

Eight years since opening near University of Texas Austin campus, this woman-owned studio still draws a crowd with its emphasis on community and personal transformation. You’ll always be comfortable here with the inviting atmosphere and the option to choose your ideal temperature for practice: non-heated, lightly-warmed or heated. More traditional classes include Yin, Hatha and Vinyasa, while the BRocked, a vinyasa sequence set to classic rock, is perfect for those looking to add some Texan charm to their flow.

What better way to turn inward than by om-ing to the hum of a harmonium in a dreamy space surrounded by lush textiles and strings of twinkling lights? Translating to “bliss” in Sanskrit, “Sukha” could not be a more fitting name for this elegant studio that oozes with feel-good vibes. Whether you feel like a Restorative Sukha or Super Sukha Flow, you’re sure to find your ideal practice in one of the two locations that offer more than 85 classes each week.