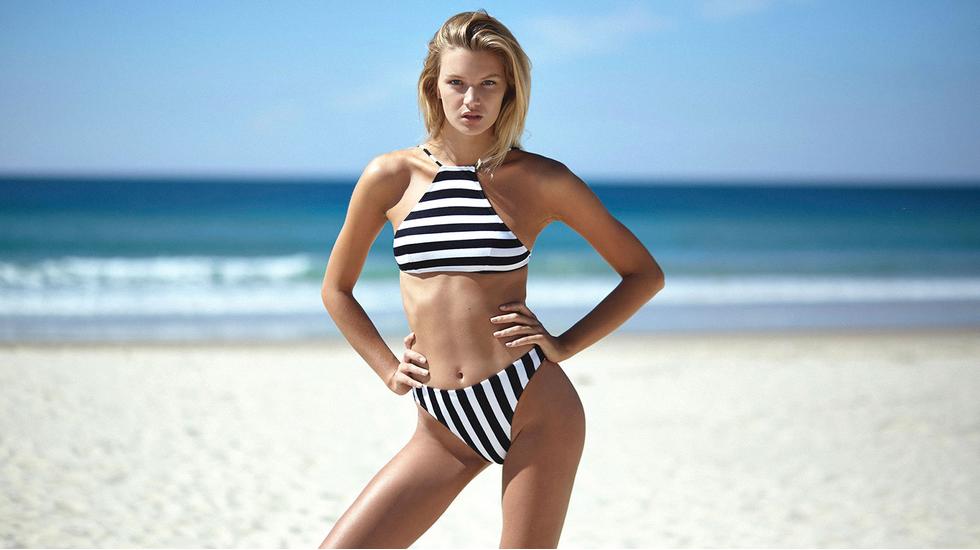 It was Australia's original 'Million Dollar Mermaid' Annette Kellerman who caused a splash, quite literally, by sporting a one-piece, tight-fitting, bathing suit on public beaches in the early 1900s.

Swimming was a therapeutic escape for Kellerman; she broke down the restraints of a society that forced women to wear cumbersome outfits that prevented movement. By her early twenties Kellerman was a world-class swimmer, beating dozens of men. She felt it was necessary to set women free to really swim, using her status to design a range of fitted swimsuits named 'Kellerman's' long before celebrities leveraged their fame to sell clothes. A competitive swimmer, vaudeville and movie star, she also became a celebrity health guru before there was even such a thing; she was a vegetarian when it was still an unthinkable concept and owned a health food store.

A free-spirited and modern woman, for whom swimming was a metaphor for female emancipation, Kellerman liberated women from incarcerating outfits and began a revolution of streamlined, one-piece costumes.

Not only does Australia seem to produce the perfect swimwear itself, but it also seems to produce women who look really, really good in it. Kellerman was labelled the 'Perfect Women' - apparently her physical measurements made her the closet embodiment of Venus de Milo - while Elle Macpherson is famously nicknamed 'The Body'. Perhaps it is just that great genes are circulating Down Under, but the intrinsic beach culture may also have something to to do with it.

It was in Australia than the legendary Speedo, known as 'The Original Aussie Cossie', was founded in 1914, pioneering every technical advancement within swimwear ever since. Developing the first non-wool suit, Speedo was the first company to start producing swimwear made of nylon/elastane, which is still the most popular choice today. Ahead of the game, it was the Aussie label Triangl that launched a range of flattering neoprene bikinis and took advantage of social media to market their designs. From wool to nylon and neoprene, they lead the way again with brands like She Made Me returning to the boho crochet styles of the past.

While it might not be the go to for the fashion conscious of today, Speedo has also been very open to embracing and initiating changes in style. As a result of limited supplies in the post-World War II era, Speedo spearheaded the bikini, which was not yet regarded as acceptable. Interestingly, high levels of exposure seems to be retreating to more modest cuts; perhaps now having pushed the boundaries to their limit, women feel free to choose subtlety on their own accord. For example, the high cut neck and high cut bottom style two-piece is currently trending.

Maybe its because of their distance from the rest of the world, or because of their fairly recent history, but the Australians seem less bound by tradition and are ready to challenge the status quo; this is evident in the evolution of swimwear. Their liberal, sun-drenched approach to dressing is as quintessentially Aussie as their laid-back attitude to life and that is why whenever I am choosing swimwear, the first place I look is to see what they're sporting Down Under.

Being Being half-Australian, I am often exposed to the stereotypes of Australia as a nation of pro-surfers, expert barbecuers and crocodile wrestlers. While there might be some misconceptions about Australia, aka 'OZ' or to the locals just 'Straya', a land of natural beauty and lackadaisical abbreviation, it is also a nation of innovators; think less the plastic wine cask and more Speedo swimwear and 'The Body' that is Elle Macpherson.

Blessed with a famous coastline of beaches and sun-worshippers, Australia has always had a vested interest in swimwear, and this has been at the forefront its development. Turning what is essentially underwear into outerwear, the evolution of the modern day swimsuit tells an interesting story about the changing perceptions of the female body; it expresses the zeitgeist.

In the past century, swimwear has transformed from its prudish beginning as neck-to-knees weighty pantaloons, to the variety of next-to-nothing styles we see today.