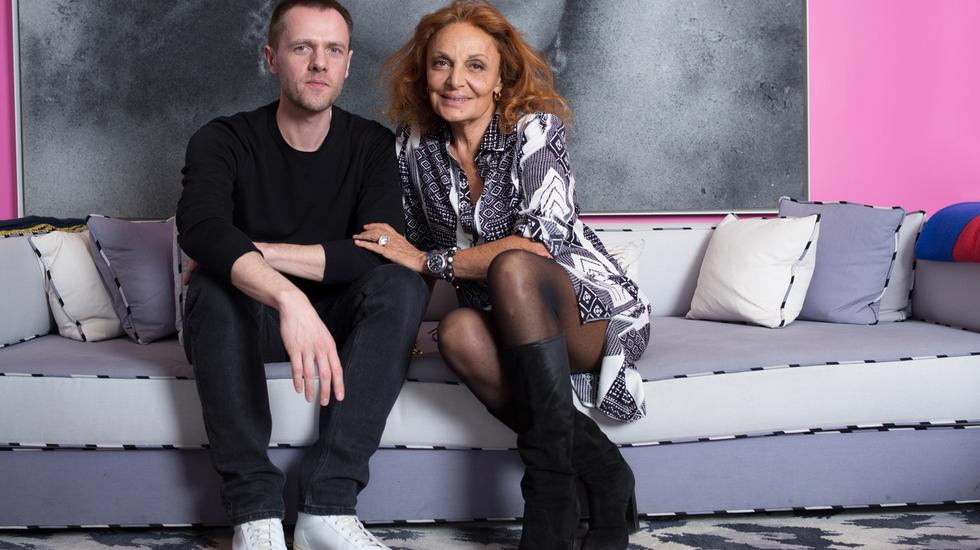 The West Village is Old Belgium – the cobblestones, the bricks, the markets, Gansevoort Street – it feels like Antwerp.

"Everybody is a foreigner," Diane says, adding: "It doesn't matter who you are or what you are. Nationalities mix and classes mix. Nobody is US native."

For both Tim and Diane, New York offered them exposure to an array of creative influences from across the world. "For me as a brand," Tim muses, "it meant a lot at the start when you get noticed and suddenly feel that support. You have all these photographers and stylists who want to come to New York and live here. There's a whole community, diversified because they come from all over the world, with their different takes."

"New York welcomed me and built me up. I lived my American Dream in New York."

Even their hometown felt aptly represented, as Diane explains: "The West Village is Old Belgium. You have the cobblestones, the bricks, the markets, Gansevoort Street... It feels like Antwerp."

What is curious about both Tim Coppens and Diane von Furstenberg is that, despite being Belgian natives, neither would consider themselves to be Belgian designers. Diane, of course, shot to fame in the US decades ago with her classic wrap dress - the uniform for chic female professionals across New York City, and has established herself as an American icon ever since.

"I am definitely an American designer," Diane says, "because I have been here for so long. I have never repudiated that I am Belgian, but I came to New York when I was 20. I came here with this idea of creating a little dress that everybody could wear, that didn't look like anything that was around. New York welcomed me and built me up. I lived my American Dream in New York."

"And he has become a New York designer," Diane goes on, smiling at Tim. "But he is very, VERY highly regarded in Belgium."

The concept of the American Dream was crucial to both designers. Whereas in Belgium, the focus for designers was on theory and craftsmanship, in New York, both Diane and Tim were able to build a business and cultivate their brands.

"New York is a bit like Venice in the time of the Doge," Diane philosophises. "People come here to sell - their art, their movies, their clothes - anything. It's the centre of commerce, where commerce and art meet."

New York welcomed me and built me up. I lived my American Dream in New York

For Tim, the American emphasis on commerciality was something completely novel. "In Belgium you have the history of the Antwerp designers," he explains. "But I wanted to build a business also. I want to be creative, but in the long term I want to make a product."

If America's personality is loud, loveable and commercial, then Belgium's, as Tim and Diane paint it, is more introspective, brooding and conceptual. "People are so intellectual and creative," Diane muses, adding: "But I don't know why! I think it has to do with the dullness of the weather, it always rains..."

"But even the dullness at the seaside," Tim goes on to say, "is a beautiful shade of grey."

Antwerp's Royal Academy of Fine Arts is one of the oldest European institutions of its kind and Coppens can count the likes of Vincent Van Gogh and Gustave Wappers as his fellow alumni. With a reputation for intensely cerebral, first-rate training, it's no wonder the Academy students come away with a highly conceptual approach to art. It's an attitude that Diane attributes to Belgian artists in general. To emphasise her point she recalls a recent visit from a Belgian painter to her studio in New York: "Everything he was saying was so abstract!" Diane says light- heartedly. "I am not highly conceptual, although I do have a major concept. My concept is all about The Woman."

Thoughtful, scholarly, romantic - these are the buzzwords that seem to define Belgian art. As Diane and Tim explain, Belgians possess a more esoteric creativity, bubbling beneath the surface.

"People are always creative when you talk to them," Tim expands, "but not loudly creative. You have to get it out of them."

"Belgians are very creative," Diane agrees, "but everybody tries to be discreet. And that is something you don't see in me! I mean, I am anything but discreet - very colourful, very bold. So I certainly don't have that aesthetic."

To be sure, the DVF look is a world apart from the gothic, androgynous feel of Ann Demeulemeester, the quirky designs of Walter van Beirendonck, or the space-age surrealism of Marina Yee. But what is it about Belgium that provides such fertile ground for these diverse and innovative designers?

"It's the way they teach," Diane suggests. "They push you to be original, to disrupt."

It is also, arguably, the physicality of the country itself. Diane reiterates Tim's description of Belgium's "beautiful shade of grey" by referencing the muted palette of Belgium's landscape.

"It's a very clean canvas," she ponders. "A canvas that's not disrupted. There's silence. People live in villages and you can hear your steps when you walk in the streets."

"Belgium is a very neutral canvas"

With such serene and subtle surroundings, Belgians have to find their creative influences from within. That said, Diane is quick to point out that behind the theories, abstraction and intellectualism, Belgians have an undeniable warmth. The designer recalls opening her first store in Belgium 15 years ago and being a little nervous to meet the famous school of Belgian designers, only to be blown away by kindness of "Ann and Dries".

"I would say that Belgians in general, and Belgian designers in particular, may seem like they are intimidating," she notes, "but they are actually very warm."

Diane and Tim will both be returning to their homeland for the BOZAR exhibition this summer, and will be in good company. With over 100 designers set to be showcased, including Haider Ackermann, Jean-Paul Lespagnard and Bruno Pieters, The Belgians: An Unexpected Fashion Story is gearing up to be a major cultural event, gathering natives and non-natives alike to celebrate cutting-edge Belgian art and design. Both Diane von Furstenberg and Tim Coppens may now call New York home, but the strength of their Belgian roots, and the support they feel from their home country, is undeniable.

"They are so very proud of Tim," Diane says, referring to the Academy of Fine Arts. "And in my own way, I guess they are proud of me too."

The Belgians: An Unexpected Fashion Story will be running from June 5 to September 13 at the BOZAR Centre for Fine Arts in Brussels. Find out more here.

Discover More
How to Stay Fresh on the Plane: Beauty Secrets from Air Hostesses
Read now

Belgium Belgium - a land of fine chocolate, medieval towns, Tintin and of course, pommes frites. When it comes to high-end fashion, this small European country does not tend to spring to mind.

It's easy to forget that some of the biggest names in contemporary haute couture - Raf Simons, Martin Margiela and Olivier Theyskens, to name but a few - all hail from Belgium. The country is also home to one of the most prestigious design schools in the world, Antwerp's Royal Academy of Fine Arts. The Academy was an incubator for the celebrated Antwerp Six - a group of young design students including Dries Van Noten and Ann Demeulemeester, who radically disrupted the fashion industry in the 1980s with their avant-garde aesthetic.

This summer BOZAR (The Centre for Fine Arts) and Brussels' MAD (Mode and Design Centre) are celebrating the fashion talent their country has generated, and continues to generate, with a major exhibition and multimedia festival called The Belgians: An Unexpected Fashion Story.

In anticipation of this, for Volume 11, SUITCASE sat down with two of the most influential Belgians out there: the legendary Diane von Furstenberg and up-and-coming prodigy Tim Coppens, both of whom grew up in Belgium, but launched their careers in the US and found success in New York City.

On the top floor of DVF's vibrant studio in the Meatpacking District, Coppens and von Furstenberg spoke about their Belgian heritage, how their careers blossomed in New York and what makes their homeland such a catalyst for creative talent.

When a young Diane von Furstenberg arrived in New York in 1970, the city was "cheap and dangerous". At the time, Manhattan was rife with crime, drugs and unemployment - a far cry from the modern metropolis she was expecting. Fast-forward 40 years and Tim Coppens was met with a wholly different city. Gentrified and clean, Manhattan had evolved into a glamorous cultural hotspot. But despite the differences between their first encounters with New York, the city provided both young Belgian designers with the energy and opportunity they craved.

"It's eclectic," Tim explains. "And eclecticism is something I didn't have when I grew up, but I had been looking for it." The designer, who has won the praise of Women's Wear Daily and the Council of Fashion Designers of America, cites "street culture, skateboarding and hip hop" as some of his biggest influences, and stresses the impact that moving from a village of 4,000 people to the buzzing city of New York (population 8million) has had on his creative output.