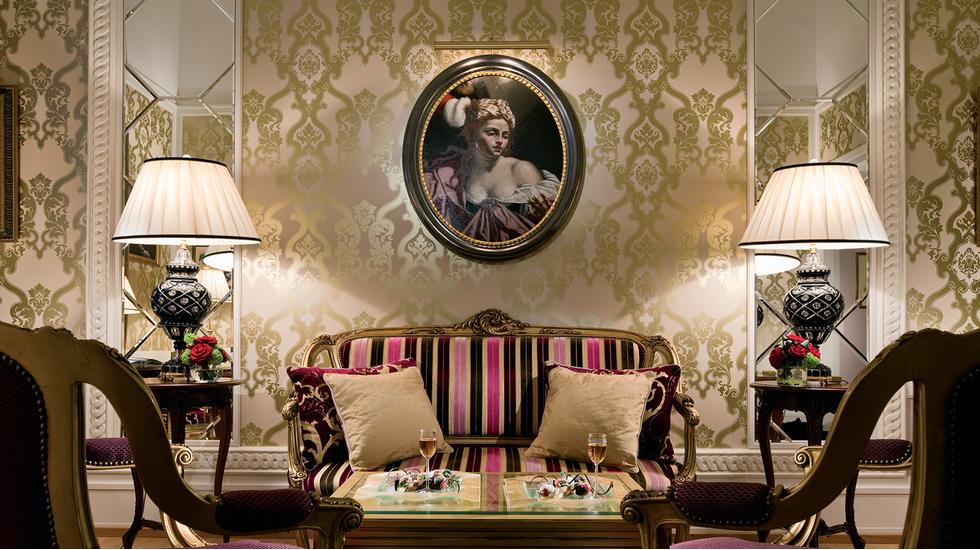 Tucked between Nevsky Prospect and Arts Square, Belmond Grand Hotel Europe has enchanted Russia's high society for more than a century. Today, it serves as a gateway to the cultural and culinary highlights of St Petersburg.

St Petersburg is a matryoshka doll, a city layered with tales of perseverance, passion and revolution. On its low-lying horizon, onion domes and golden spires vie for attention. Canal-side dachas once home to the artistic elite give way to the peach-kissed Italianate mansions and neoclassical palaces that surround Nevsky Prospect.

At the city's cultural epicentre, Belmond Grand Hotel Europe's corridors course with history as the Neva does with water. Since 1875, the hotel has enchanted Russia's high society and world-famous guests. Tchaikovsky honeymooned here. Rasputin conducted his business in its alcoves. Elton John performed an impromptu concert. The hotel restaurant was St Petersburg's first to use electric light bulbs and, after the October Revolution in 1917, it briefly served as a hospital and orphanage.

Today, there's little understated about the splendour on show. The Carlo Rossi-designed exterior houses a nostalgic, soft-lit glamour that's all marble and sweeping staircases, priceless artefacts and art-nouveau flourishes. With a gilded shopping arcade, live ballet performances and St Petersburg's only vodka sommelier, Belmond Grand Hotel Europe gives guests little need to stray from its walls when it comes to discovering the city's cultural and culinary highlights. Step out of its grand doors, however, and many of the icons of St Petersburg lie within a pleasant stroll.

Lavish communal spaces are matched by extravagant rooms and suites, of which there are more than 10 categories ranging from Superior Rooms to the Imperial Suite - the latter of which is the largest hotel accommodation (sprawling some 350sq m) in St Petersburg. Each room benefits from antique furnishings, local art, marble bathrooms, king-size beds, minibars and coffee machines - a joy after evenings spent vodka tasting.

Designed in collaboration with the nearby State Russian Museum, the five sprawling Avant Garde Suites feature specially commissioned artwork inspired by the likes of Kandinsky and Malevich. The 10 Unique Historic Suites meanwhile serve as eulogies to the hotel's past, each double the size of standard rooms and notable for their considered decor - a large writing desk takes centre stage in the Dostoyevsky Suite while the Stravinsky Suite is a vision of green, echoing the composer's The Rite of Spring.

It's difficult to imagine a tsar dining more decadently than one does here. An aureate stained-glass mural of Apollo presides over L'Europe restaurant in which a live pianist accompanies breakfast. "Buffet" doesn't do justice to the morning spread. Breads, pastries, fruits and cereals are far from the run-of-the-mill selection, but do save space for cold cuts and warm dishes. The piled-high bowl of caviar and blinis go down particularly well. Don't miss the Imperial Brunch. Each Sunday, hotel guests and the city's high society gather to raise glasses of sparkling wine and tuck into a multinational buffet that stretches over 30m and lasts late into the afternoon. Vodka served in an ice sculpture feels especially louche.

First opened in 1905, L'Europe is Russia's oldest continually serving restaurant and a hotspot for those who like to see, to be seen and to eat. Try its signature "Egg in Egg" - a shell filled with truffled scrambled egg topped with caviar - and beef stroganoff made to a recipe passed to the hotel's kitchen from the Stroganov family, whose baroque palace is just down the street. Make the most of the experience by dining here on Tchaikovsky Night (every Friday evening) when candlelit meals are accompanied by a live chamber orchestra, opera arias and ballet dancers performing Swan Lake's White Adagio.

There are several less formal - but no less decadent - dining options. Get a taste of Russia in the Caviar Bar & Restaurant, where 15 varieties of the "black gold" are accompanied by 35 vodkas and a range of house-infused liqueurs. The city's only dedicated vodka sommelier will give you the lowdown on the etiquette and history of each delicacy.

In the glass-roofed Mezzanine Café, take Russian afternoon tea - think: miniature pirozhki and (yet more) caviar - surrounded by an indoor terrace garden. For something altogether different, embark on a culinary romp across the Far East in AZIA.

Open 24 hours a day, the hotel's magnificent art nouveau Lobby Bar is a protected historical and cultural landmark. Park yourself by the green-tiled fireplace and drink in the refrains of live jazz and blues well into the small hours. In the cold Baltic winter, one of the bar's smoked cocktails goes down especially well.

For all its turn-of-the-century charm, Belmond Grand Hotel Europe has plenty of modern luxuries too. The Health Club is kitted out with state-of-the-art cardiovascular and resistance training machines, a sauna and plunge pool, as well as offering yoga classes. Workout done, head to the Carita Beauty Salon where treatments include massages, manicures and hairdressing. Upmarket boutiques populate the ground-floor shopping gallery, selling fine jewellery, perfumes and the like. The hotel's homemade chocolates are deliciously rich - as are most things here. The hotel has one adapted room and all areas of the hotel are wheelchair accessible.

On the hunt for a venue? The Krysha Ballroom designed by Fyodor Lidval would make a sparkling backdrop for celebrations.

Things I should know…

The hotel serves as a launchpad to St Petersburg, whether visiting during the white nights of summer or winter's white days. In-house experts lead excursions so that you can make the most of the city. Find out how 3,500-year-old Egyptian sphinxes arrived here as part of a walking tour or, between May and October, island hop on a boat trip that threads along the city's canals. Come evening, enjoy world-class opera and ballet from Belmond Grand Hotel Europe's private box at the Mikhailovsky Theatre - they're the best seats in the house.

The hotel sits on St Petersburg's main artery, Nevsky Prospect, on which shops and restaurants rub shoulders with ornate churches and awe-inspiring palaces. The Winter Palace and the Hermitage Museum, the State Russian Museum and the Church of the Savior on Blood are all within a pleasant stroll.

Built on swampland, St Petersburg - the "Venice of the North" - runs on a network of canals crossed by 342 bridges. As part of a Disneyland-esque spectacle, nine of the bridges are raised each night around midnight to let ships pass. It's well worth skipping a little shut-eye and taking the 15-minute drive to Alexander Nevsky Bridge to watch.