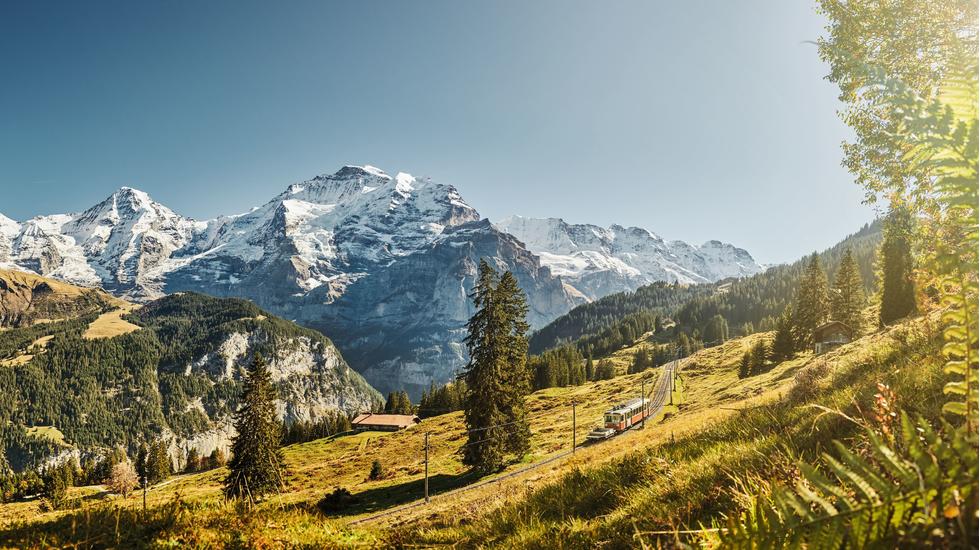 Picture Picture Switzerland and you no doubt imagine a diorama of silvery mountains marbled with snow. But in autumn those peaks adopt an entirely new splendour, lain with a carpet of crunchy leaves and draped in a ruddy-hued appliqué. One of our favourite places to experience so-called "off-season" Switzerland? The Bernese Oberland region.

This majestic landscape sings in autumn, when summer's wildflowers are slowly kissing goodbye to the mountain passes, the climate is ideal for brisk hikes and seasonal festivals spring into life. Fewer tourists mean it's easier to wangle a table at the region's best restaurants too.

It would be easy to assume that navigating these lesser-visited parts - buying tickets, finding connections, getting off at the right stop without forgetting your luggage - would be a feat as challenging as summiting the towering Jungfrau. Not so.

Switzerland is home to the world's most dense public transport network, a fact that may sound jarring with nature, but in reality manifests as eco-friendly train, bus and boat services that cast a web across the Bernese Oberland and beyond.

Thanks to the Swiss Travel System's all-in-one ticket, the Swiss Travel Pass, and synchronised timetables, joining the dots between the transport system's 22,000 stops is a doddle - so much so that this is the way locals get around too. You'll no doubt rub shoulders with a few Alpöhi en route. Ask them where to find the best fondue in town.

Tracing Switzerland's railway lines, cableways and hairpin turns is the best way to get a real sense of this captivating country. Travelling south by train, a diverse showreel flickers through panoramic windows: Alpine passes give way to glacial falls, meadows of grazing cows and the unexpectedly Mediterranean lakes.

Step back in time on the Giessbachbahn, which has rattled past woodland and waterfalls by Lake Brienz since 1879, or marvel at technological innovation on the Gelmer funicular - one of Europe's steepest. With the Swiss Travel Pass as your companion, you can also get a free fix of 20th-century art in Bern's Zentrum Paul Klee.

We're shaking off city stresses and embarking on an adventure that'll take us from wellness-oriented Gstaad to the cyan lakes of Interlaken and the magnificent Jungfrau. Join us for the ride.

50 minutes by train from Bern

Few antidotes are as effective at washing away urban fatigue than the sound of water lapping against a reed-cushioned lakeside. So-called for its position between Lake Thun and Lake Brienz, Interlaken is ideal for city dwellers in need of a breather.

A hike in the wildlife-rich Bernese Oberland is best wrapped up with sundowners at the palatial Victoria-Jungfrau Grand Hotel & Spa. You could skirt Lake Brienz before finding a perch on the terrace of Boutique Hotel Bellevue in the sleepy village of Iseltwald. Alternatively, make tracks to Interlaken proper, where the gourmet restaurant La Terrasse offers a taste of French-Swiss fare. Round off your meal with a rooftop digestif at Hotel Metropole, gazing at the glistening lakes below. This is the good life, Bernese style.

Two hours by train from Bern

This town does wellness well. There's a reason that many glamorous high-fliers roost in Gstaad's fairy-tale chalets - beyond them lie Instagram-ready vistas threaded with paths of cyclists and ramblers past. Fill a backpack with Gstaad's most redolent cheeses, grab an e-bike and weave among fir trees and meadows to Lake Lauenen for an al fresco picnic.

For dinner, we've got our eye on traditional Swiss fare. Make tracks to Saagi Stübli, a wooden bunker known for reeling in and dishing up some of the town's best local produce. From here it's just a short bus ride to design-hotel HUUS - just the place to have mountain-wearied muscles pummelled into obeisance or whipped back into shape for another day on the hillside.

1 hour 20 minutes from Bern to Lauterbrunnen

This "young woman" mountain region is Mother Nature and then some. Among the gushing waterfalls and thorny peaks (once trodden by J.R.R. Tolkien) is a network of minute villages connected by one of the world's most beguiling railways.

Use Hotel Aspen in Grindelwald as a base from which to explore the must-see mountain passes of Schynige Platte, reachable via the Bernese Oberland Railway, Harder Kulm or Kleine Scheidegg, or skim dramatic cliff-edges en route to the lofty Sphinx Observatory. Hankering for a hike? Trek to Lake Bachalpsee or seek out remote Lake Oberhornsee, followed by a candlelit dinner at historic guesthouse Obersteinberg Berggasthaus.

Find out more about the various rail passes here: switzerlandtravelcentre.com