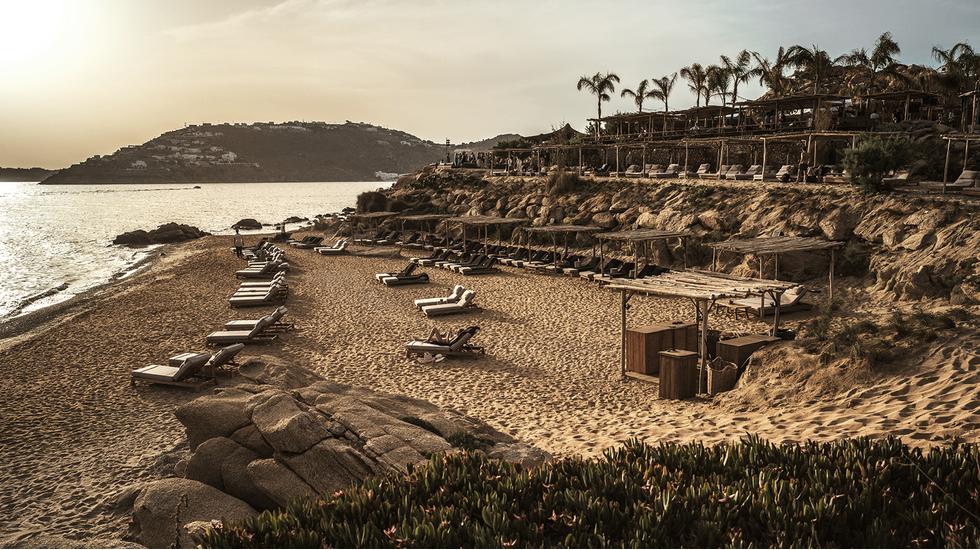 Beach Beach clubs are the stuff of summer dreams. They're an all-day hangout for bronzing, feasting, drinking, mingling and all the other verbs we associate with sun-drenched vacations. With lo-fi lunching and tabletop twirling, these are some of Europe's best.

Good times aren’t hard to come by in the party island of Greece, and at Scorpios in Paraga you’ll undoubtedly find some. Now part of the Soho House family, the beach club is named after Aristotle Onassis’ (Jackie O’s later hubby) private island, and boasts a stripped-back, natural take on Bedouin decor. Scorpios encompasses a whitewashed stone-house, ample open-air terraces and a sprinkling of sun loungers that spill onto the club’s private stretch of Cycladic coastline. Come sunset, freshly pressed juice is replaced by magnums of Cristal, and laying on sun loungers with dancing on tabletops. Spend time exploring the beach club’s extensive concept store where hand-crafted beaded kaftans and wicker bags wink from shelves.

The Netherlands may not be renowned for its beach club scene (or its beaches for that matter) but at the quieter end of the Zandvoort aan Zee, Hippie Fish is a welcome haven of boho-chic amidst the predominantly glass-and-concrete seafront. The territory of young and cool Dutch locals, this family friendly beach house sees tanned children burying each other in sand, while even more tanned parents look on from sun loungers with a G&T in hand. Of course, there’s a couple of open hearths where you can gather when the European summer takes an inevitable turn. Once the sun’s gone down, stay on at Hippie Fish’s restaurant where a sit-down dinner of langoustine bisque and glass of red offers further opportunity to wind down.

Mallorca has all but shrugged off its reputation as loutish and laddish, trading in champagne-popping flash for the more understated glamour that’s embodied by the island’s newest addition, Assaona. Wicker chairs, straw-fringed parasols and linen-upholstered sofas make for an appropriately low-key setting for laid-back days consisting of nothing but eating baby turbot sashimi, drinking cocktails and soaking up golden Baleraic sunshine. Drama is instead supplied courtesy of the beach club’s locale on Portixol beach, where Palma Cathedral towers in the distance and glittering, iridescent waters invite you in for a cooling dip.

Few beach clubs are as storied as Le Club 55, the origins of which trace back to Brigitte Bardot needing a bite to eat on set for And God Created Woman on a then-deserted Pampelonne Beach in 1955. Given the blonde bombshell’s seal of approval, the tiny fisherman’s shack quickly became a St Tropez landmark for rockstars, models and bigwigs; essentially a hideaway for the rich (and richer) to escape the troubles that accompany a life of private jets and a black AmEx. Emilio Pucci kaftans glide across the sand, as magnates and models feast on grilled fish, ratatouille and rosé. The clientele here is comprised mostly of regulars who have an enviable rapport with owner Patrice de Colmont (as well as a favourite table), and if you’re looking to join the crowd – it’ll cost you.

Cornwall has always held a nostalgic seaside allure for British city dwellers, and Hotel Tresanton’s new beach club in postcard pretty St Mawes gives form to those wistful dreams. Cheerful striped parasols, cute bungalows and the sway of palm trees in the coastal breeze see a quasi-Meditteranean take on Cornish coastal life. Kids feast on crab sandwiches and wholesome burgers while adults indulge in a beloved seaside tradition of champagne and oysters. It’s easy to ignore work emails when you’re on your third bowl of homemade ice-cream, looking out towards the sun setting behind St Anthony’s Lighthouse with the distant sound of children rockpooling on Tavern Beach below.

Between the families holidaying and Instagrammers looking for their next snap, it’s hard to find an inch to lay down your towel on the Amalfi Coast – unless you know where to look. A pink palace and bonafide bolthole of the rich and fabulous, Palazzo Avino is the only hotel in the cliff-top town of Ravello with its own beach club – accessible via a shuttle bus or a languid walk past beautiful squares, old churches and down cobbled steps. Housed in a walled private villa, the aptly named Clubhouse by the Sea is glamorous yet simple, spotlighting the famed views for which you came. Terraces are studded with red-and-white striped director chairs looking down on sunloungers where heliophiles soak up the rays and waiters bring plates of grilled octopus and glasses of champagne.

Sequestered on a sheltered northern corner of Mykonos is Ftelia, a desert-hued beach club that, when viewed from above, is hardly distinguishable from the golden shores onto which it spills. Beneath the ochre rooftops its cool, whitewashed bungalows and bars line the shore like a tiny Grecian village. From the restaurant where guests dine on sea urchins and taramasalata, the club terraces down toward the mythologised Aegean Sea where shaded sun loungers offer prime territory for sleeping off a self-induced food coma. Although Ftelia is more lo-fi than most of Mykonos’s beach clubs, once the sun goes down, decibel levels pick up and bare-footed dancing ensues.