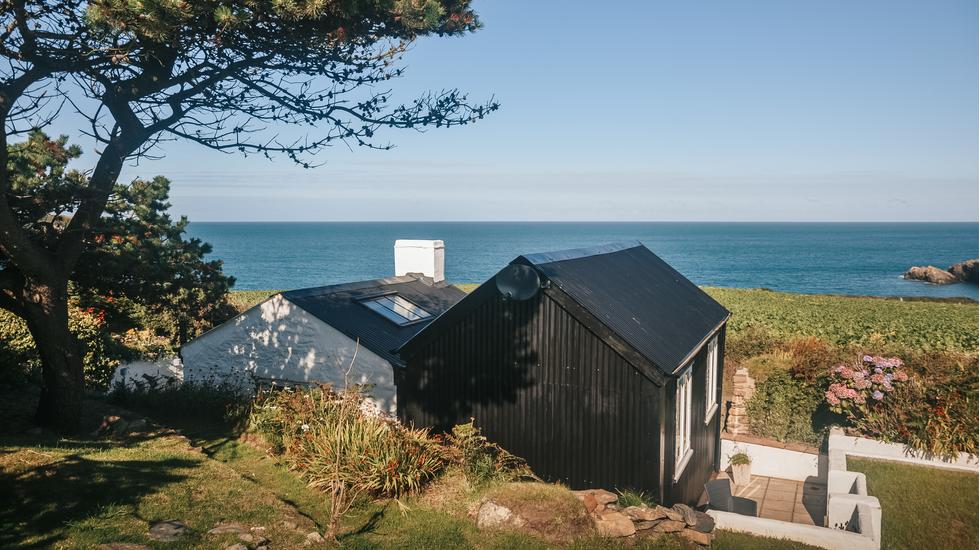 Batten Batten down the hatches and light the logfire on a stormy Cornish peninsula or stargaze from your hot tub in Pembrokeshire while you listen to the waves crashing below.

Beach huts are making a comeback. With chic interiors, unbeatable views and as off-grid as you like, they're the perfect antidote to lockdown blues and ideal for those not quite ready to stay in a hotel.

Hit the beach: UK coastal huts to bed down in

Blue Cabin by the Sea

In a secluded harbour accessed via a tunnel cut through the rocks, it doesn’t get much more remote than this Scottish hideaway. And yet, The Blue Cabin by the Sea is only an hour from Edinburgh by car, making it perfectly doable for a long weekend. The little wooden house sleeps up to four, with a fully-equipped kitchen and enviable bookshelf to entertain on grey days. Pick up lobster and crab directly from Cove Harbour and cook a feast on the barbecue overlooking the sea. From the terrace, you’ll spot fishermen going about their business and the occasional dolphin, but other than that you’re mostly cut off from the world. The decor is colour-popping mid-century vibes, and there’s WiFi for those who don’t want to switch off entirely.

The fact that a smattering of Hollywood stars have stayed in this converted 1920s teahouse over the years doesn’t detract from its castaway appeal; the self-catering cottage is just as popular with surfers, solo travellers and free-spirited couples looking for some escapism. Between the seaside towns of Bude and Boscastle, it’s a hidden surf spot with some of the best Atlantic rollers on the Cornish coast. Despite the remote location and weathered exterior, the hut is insulated from the ferocious storms on this part of the coast and well kitted out – think cosy log burner, lovely soft linen and a stylish Smeg fridge.
+44 1637 881 183 Go to website

“Cool, quirky and original” is how this Devon hotel describes its new beach hut venture, in which a cluster of blue and white wooden cabins have been renovated as an alternative to hotel rooms. Sweeping sun decks and wall-to-ceiling windows are perfect for lazy afternoons on the beach with views across Lyme Bay and Portland Bill. Inside, contemporary artwork has been specially commissioned. Tasteful nods to luxury include Sonos surround sound and underfloor heating.

The Pig on the Beach

Set on cliffs overlooking the stunning Studland Bay, The Pig on the Beach is one of Britain’s best coastal retreats. The rooms are the highlight of this converted 16th-century manor house, each styled in distinct country-house decor, but each with soothingly rustic views of coastal Dorset – best enjoyed while soaking in roll-top baths or dozing off in four-poster beds. Awake from an afternoon nap to enjoy innovative, daily changing dishes at the conservatory-style restaurant, before enjoying drinks at the snug, wood-panelled bar. Don’t forget to book a massage in the hotel’s spa – two treatment cabins can be found in a wild meadow nearby.

Fifteen self-catered beach huts scattered along the endless stretch of white Cornish sand – these homes come in all shapes and sizes. The largest sleeps 10 guests, while the smallest are perfect for couples. What they all have in common is their own private sunken cedar hot tubs, barrel saunas and access to the turquoise Cornish sea. The interiors are whitewashed with flashes of seaside colour. The location also couldn’t be better; it’s an easy walk to the artists' town of St Ives, where pubs, surf schools and independent shops await.

Carved precariously into the cliffs, what looks like a small studio from the water is actually a cavernous house with five spacious bedrooms. It’s perched over the tidal estuary of the River Dart on the outskirts of the pretty village of Dittisham in South Devon and not far from Broadsands and Blackpool Sands. There’s a snug bunk room sleeping four, and master suites with balconies over the water, making the self-catering house perfect for big groups and families.

On the South Downs of West Sussex near Bognor Regis, these four triangle houses are bang in the middle of bucket-and-spade territory. They’re family and pet-friendly, and can be hired in groups – perfect for multi-generational holiday reunions. The huts each come with bikes and fully functioning kitchenettes, as well as breakfast hampers or the option of hot breakfast served in the adjacent Beachcroft Hotel. For those who don’t fancy swimming in the sea, there’s also access to a heated pool.

This wooden hut in Pembrokeshire was originally built to hold the first telephone wires laid under the Atlantic Ocean. Over 100 years later, the abandoned corrugated-iron structure captured the imagination of a young couple who stumbled across it. They turned The Cable Hut into a luxury self-catering bolthole just 400 metres from the sea. The kitsch interiors make it a characterful bolthole on the rugged Welsh coastline, with a discreet hot tub to soak in before gathering by the chiminea oven and toasting marshmallows.
+44 1637 881 183 Go to website
Discover More
Seaside Staycations: 14 of the Best Beaches in the UK
Read now