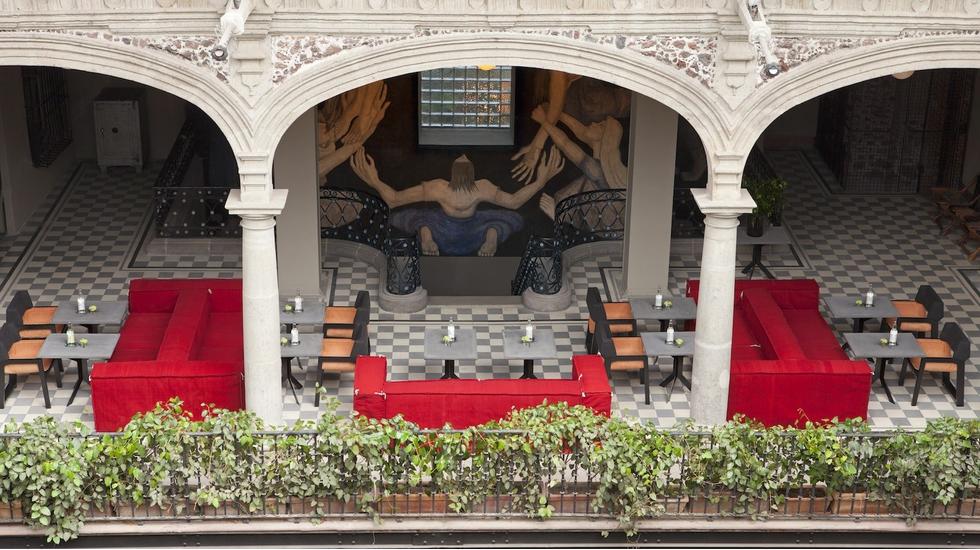 Mexico City has a culture and a flavour all of its own. With tacos and incredible street food as well as revered chefs such as Enrique Olvera at Pujol and Jorge Vallejo at Quintonil, the city's gastronomic offering is a tour de force. Then there's the art scene, which now boasts world-class institutions including the Museo Soumaya and the Museo Jumex in addition to a catalogue of iconic 20th-century artists - most notably Frida Kahlo and Diego Rivera. Boutique hotels are also upping the ante, take a peek at our pick of six of the best in town…

Leafy Roma is one of Mexico City's major creative hubs - it's also home to many of the city's best restaurants, cafés and art galleries. The boutique hotel, La Valise Mexico City, adds to the district's popularity. In a neighbourhood lined with decadent early-20th-century townhouses, La Valise Mexico City is a particularly impressive address. A three-suite refuge, its interiors splice European and Mexican styles. Then there are the one-of-a-kind suites; in La Luna, a giant rotating moon that acts as a dividing door while La Terrazza the bed can be slid onto the roof terrace allowing guests to sleep beneath the stars. It's creative and comparatively affordable in contrast to other accommodations in the area.

Located in the skyscraper district of Santa Fé, Distrito Capital is a paragon of its surrounds - impossibly tall, the all-glass structure is designed around the idea of creative minimalism. Inside, Parisian interior designer Joseph Dirand's pared-back work sees monochromes brightened by the occasional pop of colour, with individual rooms punctuated by vintage furnishings. The best way to sum up Distrito Capital? Sleek. Sleekest of all are the large pool area and sprawling terraces, which provide numerous places to wile away an afternoon among propane fireplaces.

Housed in a 1928 building in Mexico City's stylish La Condesa neighbourhood, the Condesa DF is filled with eclectic delights. Dreamed up by Parisian designer India Mahdavi, the boutique hotel reinterprets the work of revered Mexican architect Luis Barragán. Expect an abundance of bold colours and interiors rife with personality - an overarching floral theme is displayed on cushions and chopstick covers alike. Forty rooms and suites - which open up to a wooden terrace amid the treetops - are designed in moss green, cream and chocolate-brown tones. Inspired by the tranquility of monastic bedrooms, sleeping quarters are livened up with retro lamps and handwoven rugs from Oaxaca.

Colonial-era architecture and modernist design collide at Downtown Mexico - think vaulted ceilings offset by minimalist furniture and geometric patterning. On the terracotta roof terrace, you'll find the concrete pool and palm-ringed hot tub - a great spot to chill with a shot of mezcal before sundown. As Downtown Mexico is located in the heart of the Centro Histórico, its roof is also a good place to start your day, plotting out the direction you will head next from a bird's-eye view. The hotel is mere minutes' walk from landmarks such as the Catedral Metropolitana and Palacio de Bellas Artes, so deciding where to venture on day one is a relatively easy task.

In the Roma district - one of our favourite areas in Mexico City - you'll find Nima Local House Hotel. Posed as a stylish home-from-home, you can bank on comfortable quarters, beyond-helpful staff and, with only four rooms, a certain level of privacy not afforded in the city's larger hotels. This hideout is a great launching pad (and a crash pad too, for when the frenetic metropolis gets a little too much). Be sure to ask the concierge for tips on what to see and do in the area; the Nima team has its finger firmly on the pulse.

You'll know you've arrived at Habita when you reach a 50s-style, all-glass building. Book ended between new and old facades, Habita is all angles and architectural prowess. Honeyed daylight from the floor-to-ceiling glass windows and doors is a strong sell for the boutique outpost, and of all its 36 rooms, The Junior Suite is the standout. The balcony is covered by glass, so guests can use it whatever the weather. This design detail proves particularly useful come rainy season.