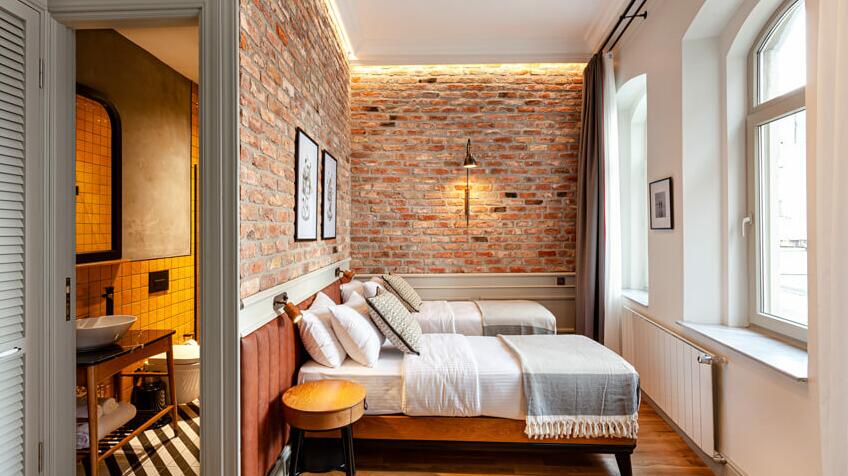 Istanbul Istanbul is a city of juxtapositions: the cry of the imams' call to prayer and ferry horns blasting across the Bosphorus against techno music drifting from rooftop bars. Wander its streets and you'll encounter third-wave coffee shops and midnight sweetcorn vendors, myriad frenzied bazaars and the tranquil serenity of artisan designers' studios. East meets West has long been the tagline of this continent-straddling city - we can't remember the last time we read a description that didn't call it the gateway between Europe and Asia - but often, clichés ring true. Istanbul's cultural confusion shimmers like the summer haze that cloaks its sultry streets at summer's end.

It's the same story for the city's hotels. You'll find Persian rugs, Ottoman antiques and traditional Turkish breakfasts under Byzantium archways, but also Brooklyn-inspired brick interiors, flaky French pastries and buzzy rooftop bars. We've haggled our way through the bazaars and backstreets of Galata and Karaköy to bring you our favourite stays in the city.

First impressions of this slick city townhouse disguise the hotel's history; the 150-year-old building was once home to the tobacco-trading company partly responsible for bankrolling the Ottoman empire.Today, the founders of Régie Ottoman pay tribute to its former glory with a sharp industrial aesthetic that occasionally nods to heritage. There's exposed brickwork, burnished-copper fittings and just a touch of Ottoman-era nostalgia (opulent green-velvet sofas, elegantly latticed room screens and the occasional antique). Halfway between the Grand Bazaar and the waterside, the 34-bedroom hotel is well placed for a long weekend in the city, and its brand new Ocak restaurant is head and shoulders above your average hotel joint. Expect family-style recipes, elevated a few notches and washed down with natural wine or cocktails.

Just a cinnamon stick's length from Istanbul's famous Spice Bazaar, this recently opened hotel is right in the middle of the action. The Blue Mosque, Hagia Sofia and the Grand Bazaar are all less than 15 minutes away by foot. Aside from the killer location, Mest's breakfast rooftop views are the main event: help yourself to a buffet of myriad Turkish pickles, breads, eggs and free-flowing tea, then grab a table on the panoramic terrace and feast to the soundtrack of seagulls duetting with the call to prayer. Rooms are smartly dressed, with freestanding bathtubs, soft linens and picture windows offering close-up views of Yeni Camii Mosque's blue-grey domes.

Even the most seasoned Istanbul traveller will be impressed by the levels of opulence here: exquisite mother-of-pearl furniture, silk Tabriz carpets, flamboyant tiling, intricately carved woodwork and hand-painted ceilings mean you're not just visiting museums but also staying in one. AJWA Sultanahmet's interiors are new, but sourced exclusively from local craftsmen to recreate the former decadence of Ottoman living. Hotel dining options are just as lavish, with the Zeferan Restaurant serving huge Turkish and Azerbaijani banquet-style dinners. Expect a diverse range of dolma (rice-stuffed vine leaves), kebabs, pickles and signature çigirtma biryani rice with saffron and lashings of butter, followed by sweet and savoury pastries.

The Karaköy district has been on our radar for a while. A gritty waterfront transformed into a corner of cool for city creatives, the sea breeze-washed tea stops have made it the place to be during the summer heat. The area's edginess might have rubbed smooth over the last decade (we'd head to the bar-studded Beyoğlu next door to find the hedonistic crowd), but its proximity to historic sites keeps it top of our to-stay list. Case in point? This unique hotel is housed in a restored 19th-century fish market. At 71-key 10 Karaköy, the decor is pared back and sleek, with original Ottoman-era ceilings and a bronze fish installation paying tribute to the building's past. On the Sky Terrace, influencers jostle to get the best views over the Golden Horn and Sultanahmet - avoid the stampede by sitting back on the bar stools and toasting the hotel's history with a glass of champagne.

Opened just before the pandemic, a tricky two years has done nothing to deter the small team behind this independent hotel. Each of the 10 airy bedrooms is decorated with warm wooden floors, white walls and mid-century-inspired furnishings. We'd recommend nabbing one with terrace views looking over the city's pencil-shaped Galata Tower and the Bosphorus Strait beyond. Situated away from the blander streets of the city's "hotel district", this is a spot where life slows down a notch as you linger over breakfast in the third-wave café World House Coffee Co. Don't expect a traditional Turkish coffee - a single-origin cold brew is on the cards here.

The uber-contemporary, industrial and loosely nautical design at Sub Karaköy provides a welcome break from Istanbul's street-level kaleidoscopic colour. The simplicity is intended as a "harbour of minimalism" within the literal harbour of the Golden Horn, and it works (although there's still the odd flash of red found in each room). The breakfast spread is a highlight, with the (mostly organic) dishes all displaying their provenance on little maps, right down to where the berries for the jam originate. Sub Karaköy's green credentials are impressive, too, with a commitment to recycling everything from wire coat hangers to cooking oil, as well as working with the community on climate initiatives.

Sensing some Italian essence in the decor of DeCamondo? This 32-key stay is named after one of Istanbul's wealthiest families - nicknamed the "Rothschilds of the East" - who counted their coins for over 300 years in the gilded city of Venice, buying up treasures from across Europe (a few of which can still be spotted in the hotel). This centuries-old legacy seeps into the design of stylish bedrooms, where clean lines and warm simplicity complement original brick ceilings, wooden beams and vintage photographs of this illustrious family. Look out for Banque DeCamondo, a sister townhouse hotel, opening this year.

Wandering the steep, cobbled streets of Galata offers a view of Istanbul at its finest for first-time visitors: the European quarter of the city is packed with sleepy old-world coffee shops beside designer boutiques, and dusty bookshops patrolled by welcoming cats. Tucked into an enchanting little corner of this nostalgic scene is Georges Hotel, a 19th-century apartment building-turned-hotel that's so discreet it doesn't even have a sign outside. Rooms are light, airy and uncomplicated, pairing crisp French linens with Ottoman architecture and natural-wood floors. In the evening, head to the terrace of its rooftop restaurant for a cosmopolitan mix of the many culinary influences that make up Istanbul.

Affordable yet comfortable, Hotel Poem is for those who'd rather spend their time and money on shopping and eating out than a place to lay their head. Still, the sun-drenched balconies overlooking the Bosphorus are better than most of Fatih's rooftop bars, and the location in Sultanahmet means you'll get to visit many of the main attractions on foot. Of the 19 unique bedrooms, choose one with waterside views and a balcony.