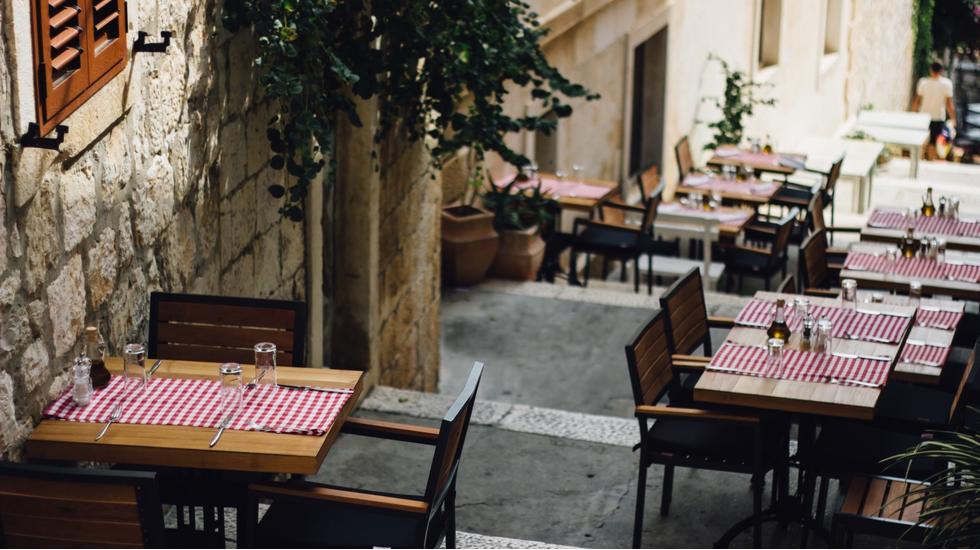 Whether Whether it's a late-night greasy slice in NYC or a local favourite in London, there's something about pizza that always hits the spot. But not all pizza is made equal and, whatever anyone says, Italy does it best. We've scoured the country from top to toe to bring you the very finest places to eat, nay, gorge on the stuff. Summer road trip around this lot anyone?

Opening its doors in 2012, Pepe in Grani is a relative bambino, but even in its infancy the restaurant has managed to scale the ranks and snag gold on the 50 Top Pizza Guide – twice. While crust is often an afterthought, eaten only once the rest of the pizza has been devoured, you won’t be setting it aside here. A hometown hero of sorts, chef Franco Pepe’s culinary endeavours champion his small hilltop town, sourcing everything from heirloom tomatoes to olive oil from local farms. When the pizza’s this good, it’s best to keep it simple with the margherita.

Neapolitan pizza is famed for its thin base and nowhere does it better than Pizzeria Da Attilio. The old-school appeal of Attilio’s is reflected in the restaurant’s ambience, which is more like a homely Italian kitchen than a restaurant. It’s the sort of place you’d expect nonna e nonno to be hand tossing dough to a soundtrack of Botticelli. The truth isn’t so far off; the family feel of the place is preserved by Maria Francesca Marinello, the daughter-in-law of the same Attilio Bachetti who opened the restaurant in 1938. The only measure of change here is the continual additions to their walls which are covered floor-to-ceiling in photos of celebrities, framed napkin doodles and press clippings claiming it to be the “best pizza in the world”. Opt for the carnevale, a star-shaped pizza of doughy points stuffed with ricotta, a Naples staple that’s best eaten warm and oozing.

Featuring bare concrete walls, high bar stools and shiny brass touches, this dimly lit restaurant is more industrial-chic than your typical Italian – but it certainly doesn’t make concessions when it comes to pizza. The name is a nod to the Prohibition period and a direct contradiction to the restaurant’s extensive cocktail list. While Milan isn’t necessarily the go-to city for pizza, Dry has made it onto many prestigious lists, in part thanks to the dough, which is leavened for 48 hours to produce soft, light bases. Unlike most of the pizzerias on this list, Dry accepts reservations so it’s perfect if you don’t feel like waiting in street long line. With a cocktail and calzone for just €12, it’s an undeniably palatable offering.

Revered by foodies and cinephiles alike, Starita is legendary on two counts; it’s where Sophia Loren sells fried pizza in 1950s classic, The Gold of Naples, and they do bloody good pizza. Founded as a winery in 1901, Starita is now run by third-generation owner Antonio Starita, who’s helped out by his son Giuseppe. While the eponymous family establishment has already been immortalised in Neopolitan history, with outposts in Torino, Milan and even New York, it looks set for icon-status beyond its hometown. When in Naples, order it deep-fried; the street-food classic is made from a small disc of dough topped with tomato, fresh basil, pecorino romano and smoked scamorza cheese. Simply heavenly, Starita’s was chosen by the Vatican to present pizza to Pope John Paul II – you can’t get a better testament to taste than that.

If you’re looking for your standard Italian pizza, don’t go to i Tigli. This cutting-edge restaurant has become known for breathing new life into the country’s love affair with pizza – resulting in dismay from die-hard traditionalists but acclaim from Italian culinary heavyweights who named head chef Simone Padoan as Italy’s Best Pizzaiolo in 2017. Tigli’s take is a slow-rise focaccia, meaning a thicker, softer base that leans more towards a bread. At the heart of the restaurant is seasonality, quality and innovation; unexpected textures, colours and flavours meet in carb-y artistic renderings of Padoan’s imagination. The menu caters to the brave with unconventional influences such as Thai and Japanese, but those who fancy a margherita will find four to choose from.

While space is more than a little tight in this busy pizzeria, the food really does make up for it. We suggest you persevere, take a numbered ticket and wait patiently for your name to be called. As Roman pizzas generally do, the crust here holds a little more weight and chewiness than your average Neapolitan slice, and although it’s a case of pizza al taglio (pan pizza by the slice), this is not your average takeaway spot. Owner Gabriele Bonci sources his ingredients from Italy’s finest suppliers; the soft dough is made with buratto flour from Mulino di Marino (a well-known miller in northern Italy) for example. Try 2017’s Best Pizza in Italy – mozzarella di bufala campana a crudo, funghi prataioli and prosciutto. Pair with a €2 glass of wine and munch sitting on the pavement outside.

Primely situated for exploring Venice’s historical centre, Antico Forno is a little spot located in the Rialto market, inconspicuous if not for the crowd at its door. Unlike most Italian pizzerias, here the dough is as customisable as the toppings. Whether you’re looking for that classic Napoletana thin and crispy crust, or in the mood for something heavier, Antico Forno’s got you covered. We suggest the “pizzacia”, a blend of pizza and focaccia so good, we’ll forgive the portmanteau. Tangy tomato sauce, fior di latte mozzarella from the Treviso countryside and seasonal ingredients top the base of your choice. An offering of craft beers are the perfect accompaniment. After elbowing your way to the front, place your order and take it to go – Antico Forno is roughly the size of a shoebox and the environment of hangry customers doesn’t make for the most relaxing atmosphere. Instead, walk four minutes to Campo San Polo and snag a bench for pizza al fresco.

Pizzeria Port’Alba is allegedly the first ever pizzeria in the world. Opened in 1738, the restaurant is located in the heart of Naples and has a history as colourful as its pizzas. As a former meeting point for merchants, travellers, students and artists, it’s had more than a fair share of interesting anecdotes played out over a slice or two. Reportedly, the restaurant operated a credit system known as “pizza a otto” which gave diners up to eight days to pay for their pizza – a policy that’s no longer in place today. The pizzeria stands proud as both a relic of Naples’ culinary past and a marker of its future; it’s original lava-rock-lined ovens (extracted from the nearby Mount Vesuvius) are still cooking the same authentic pizzas to perfection as they’ve has done for centuries. The base is thin, pliable but weighty enough to be eaten the Naples way – folded twice like a wallet so as to gather the toppings and stop the sauce from spilling. While you can dine in, we suggest grabbing a portafoglio (folded) slice and strolling around the neighbourhood instead.