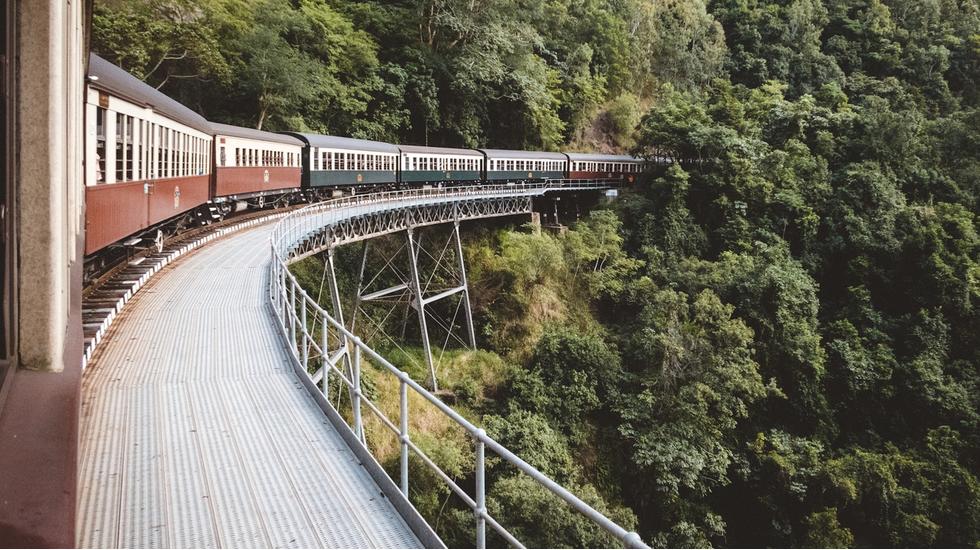 No, No, we're not talking about riding a train back and forth between London Victoria and Croydon. But there's only so much Stansted Airport on a Friday that one can take, while an hour taxi to the city centre on arrival in your destination is neither money nor time efficient. So why not put the nostalgic romance back into travel and take a train instead? Channelling timeless elegance, it's also a lot kinder on your carbon footprint. Make it about both the journey and the destination with six of our favourite train routes from London.

1. London to Fort William on the Caledonian Sleeper

Leaving London every night bar Saturday, ScotRail's Caledonian Sleeper snakes its way to the emerald-green Scottish Highlands. Forget the cardboard paninis found on low-cost flights; here it's about hearty portions of haggis and tatties in the dinner carriage. Knock back a wee dram to send you to sleep before waking up to an Aysir bacon butty. Pass by the craggy mountains that border Loch Lomond, whizz through the flatlands of Rannock Moor and roll into Dalwhinnie at sunrise when you'll catch deer scampering across Cairngorm National Park. Blurring the lines between overnight train and boutique hotel, spring 2019 will see the sleeper trains get a full makeover; double beds will be introduced and en suites installed.

2. London to Amsterdam on the Eurostar

It takes just over three and a half hours to get from desk to 'dam on the twice-daily service from London St Pancras. Head to the "Paris of the North" to swap train tracks for cycle paths and pedal along the winding waterways in search of kitsch cafés. Those more into health than hash should head to Europe's first all-avocado café, The Avocado Show, for a Boomerang-ready portion of runny yolks and avo on toast. Check in to the Pulitzer Hotel where suites reveal bathtubs big enough to throw a party in alongside well-curated libraries because it's all about balance. Word to the wise, your return journey requires a little more planning as you have to take a Thalys train to Brussels to go through passport control before switching to the Eurostar service to London.

Belgium's capital of cool has built on its storied history and transformed itself into a fashion-forward, bustling metropolis. Easily reachable from London, take the Eurostar to Brussels before jumping on a train to Antwerp. All Eurostar tickets are automatically valid for 24-hours to any Belgian station. Often billed as the "world's prettiest railway station", pull in to Antwerp-Central Station for a grand arrival into a decadent main hall complete with domed-glass ceiling. Archi-addicts will want to stroll the streets of Cogels-Osylei where mismatched style ranges see art nouveaux meet gabled townhouses and street art. Beer costs less than water here and there's nowhere better to enjoy a cold one than at one of the many dockside restaurants that litter the recently revived Het Eilandje.

Rome certainly wasn't built in a day and it would take an eternity to see all of what the "Eternal City" has to offer in just a weekend - so don't try. Instead, loosen your waistbands and embark on a gastronomic journey. Catch the lunchtime Eurostar from London St Pancras to Paris, then the Palatino sleeper to Rome, passing through classic Italian landscapes seemingly lifted straight out of a Renaissance painting. Skirt past the dome of St Peter's as you arrive at the Stazione Termini at 10am the next day. After squeezing in some of the sights, it's time to sip Aperols and sink negronis at Piazza delle Copelle. As the Vespa-lined cobbles begin to clear, seek out the "Le Derrière" - a clandestine late-night haunt accessed via a hidden cupboard.

5. Venice to London via the Simplon-Orient-Express

The 1883 advert proudly announced "there's even soap in the loos", and this is still the most luxurious train journey in the world. As a star of the silver screen, the Simplon-Orient-Express conjures up images of whisky-fuelled debates, late-night romances and the occasional murder mystery. If you're starting the 36-hour journey to Venice at London Victoria then you'll board the vanilla-coloured Belmond Pullman first, before transferring to a VIP bus to make your way across on the Channel Tunnel (serenaded by a jazz band at Folkestone). Then, it's all aboard the main event as cabin attendants dressed in sapphire-blue, gold-piped finery lead you to your private cabin quarters. After a sumptuous dinner, slink off to the Piano Bar for a Guilty 12 - the intoxicating tipple contains 12 secret ingredients inspired by Agatha Christie's characters. Rise early to catch the Austria Alps blurring past your window; the stretch between Brennero and Innsbruck is one of the best.

Summer is the season for Provence, as festivals fill café-lined squares, rosé glasses are topped up with wanton abandon and the heady scent of lavender drifts across the Rhône. But as quickly as the sun soars, so do air fares and budget they are no more. Opt instead to travel from London St Pancras to Avignon TGV via the Eurostar, which even in high season can be a cheaper (and calmer) way to travel. Chug past pale-pink chateaus, rolling green hills and valleys covered in vineyards before drawing into Avignon, where you'll see the iconic Palais des Papes appear on the horizon. Picnic in the hills of Provence at the Parc Rocher Des Doms after picking up a box of Les Papalines d'Avigonon, a chocolate filled with oregano liqueur, for dessert. For something more substantial, head to the industrial-chic bistro Le Barrio for superb bouillabaisse washed down with a dry white.