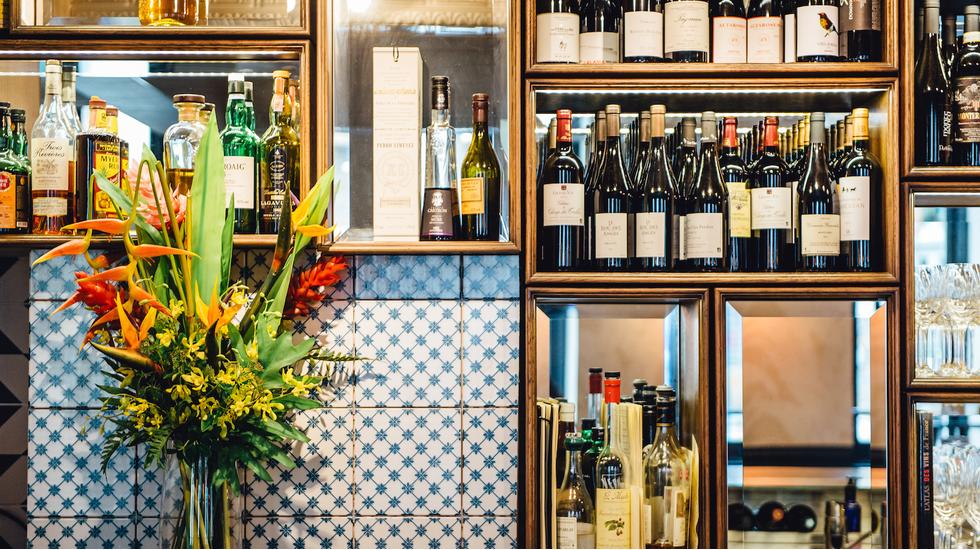 London London 's wine scene has made an exciting shift towards the unpretentious, with new wine bars focusing on character and enjoyment rather than massive markups. They're the kind of places where you can put a name and a face to the people behind them and if you pronounce 'Montrachet' incorrectly no one will shoot you a snooty side-eye. Most importantly, you know you're going to get a good glass of wine.

Our favourite wine bars in London.

Champagne + Fromage is the kind of friendly, unassuming place where you can imagine yourself popping in for a coffee on a Sunday morning and leaving an hour later with a parcel of cheese and a bottle of champagne. Based on the simple concept of grower champagne (producers who own the grapes that they use to produce their champagne) and French cheese, the emphasis is on exploring different small producers, and subsequently the variations of taste that stem from a focus on their craft. Each location of Champagne + Fromage has its own character – Covent Garden caters for the theatre crowd, while Brixton Village pulls upon the community spirit of the surrounding market – but all take inspiration from a French country deli. Greenwich is the last branch of the three to have opened, following the foodie scene’s gradual trickle from central London to more residential areas out east.

The Noble Rot wine bar and restaurant launched in late 2015 off the back of its namesake magazine. A DIY endeavour by two friends - one in the wine trade, the other a former music A&R (talent scout) - the magazine is decidedly tongue-in-cheek in places but also features a big dollop of wine geekery, and honours many of the wine industry's traditional values.

As you'd expect, it's this spirit that's carried forward to the Noble Rot wine bar and restaurant. It's one of our more formal recommendations and suits its location - a gently buzzing street in Bloomsbury. The wine list is predominantly old world, and the by-the-glass selection highlights a delightful eclecticism. Older vintages of red Burgundy (a Nuits-Saint-Georges 2008, when we visited) share the page with a Jura white and Cypriot fortified sweet. 75ml glasses are offered if you wish to taste your way through.

The food is also a big draw, with a menu overseen by Michelin-starred chefs Paul Weaver and Stephen Harris, and brought to life by a kitchen with its roots in St. John Bread and Wine (famed for nose-to-tail eating). It comes as no surprise that the Noble Rot staff are particularly proud of the terrine on their menu, a marbled slab of glory which is likely using more parts of an animal than we dare to ask about.

Sager + Wilde's first incarnation was a weekly pop-up in 2012, where a limited number of brilliant wines at overly tempting prices were open at any one time, and new ones were announced by the ringing of a bell. The wine, plus the cheese toasties and low-key vibe, meant that word spread quickly and by the time Sager + Wilde opened their wine bar they already had a small, intrigued following.

Situated on a sunny corner of Hackney Road, the permanent version of Sager + Wilde has the same spirit as the pop-up, albeit a little more organised and without the bell ringing. Staff are encouraged by owners Michael and Charlotte Sager-Wilde to express their individuality when it comes to clothes and music, and to use whichever language they're comfortable with when describing wine to customers. The result is that Sager + Wilde has a lot of character, and is also a lot of fun.

The wine itself is sourced from "a handful of brilliant importers", and frequent 'winemaker nights' show the strength of Sager + Wilde's relationship with producers around the world. Interiors nod to the history of the building, a former east London boozer called The British Lion, and were inspired by the reclaimed pavement-light bar top that the Sager-Wildes sourced from a salvage yard. Charlotte describes the look as "industrial/slightly gothic chic", adding "everything is very subtle and understated. Not remotely like it's owners or patrons at all".

Sager + Wilde have recently re-branded their second location, Mission, as the Sager + Wilde restaurant and scrapped a former focus on California to open up the range. It's within walking distance so if all the wine drinking leaves you hungry, point your nose in the direction of Paradise Row.

Next time you go for dinner in central London, here's our tip: pay your check after the main and head to Compagnie des Vins Surnaturels for the cheese course. Hidden away in Neal's Yard, CVS is sheltered from the tourist hustle of nearby Covent Garden streets and has a magic combination of gorgeous art deco interiors, comfy seats, low light and attentive waiters.

It's also the perfect spot for a romantic date. Many of the tables were set up for two when we popped in for a glass of Jurançon and a cheese board, and plenty of animated faces were lit by candles in cut-glass tumblers.

To get down to the ethos of CVS, the 'Surnaturels' part of the name can be misleading at a glance. Indeed we originally read it as having something to do with 'natural' wine, which is en vogue at the moment, but this doesn't seem to be the case. 'Surnaturels' is linked to mysticism, the unknown, and when we learned that CVS is owned by the same people who run the Experimental Cocktail Club, it started to make sense - the owners seem to be aiming to bring the magic of speakeasy-style cocktail bars to wine bars. The result is a varied wine list which will leave even seasoned wine drinkers scratching their heads in an attempt to work out how CVS found some of the producers. There are some big names, and you pay accordingly.

A full menu is served in addition to the aforementioned cheese boards, and although it includes vegetarian dishes the focus is more heavily on meat, fish and cheese (which makes sense as the original CVS is located in Paris). Wine tastings are also held periodically if you wish to learn more.