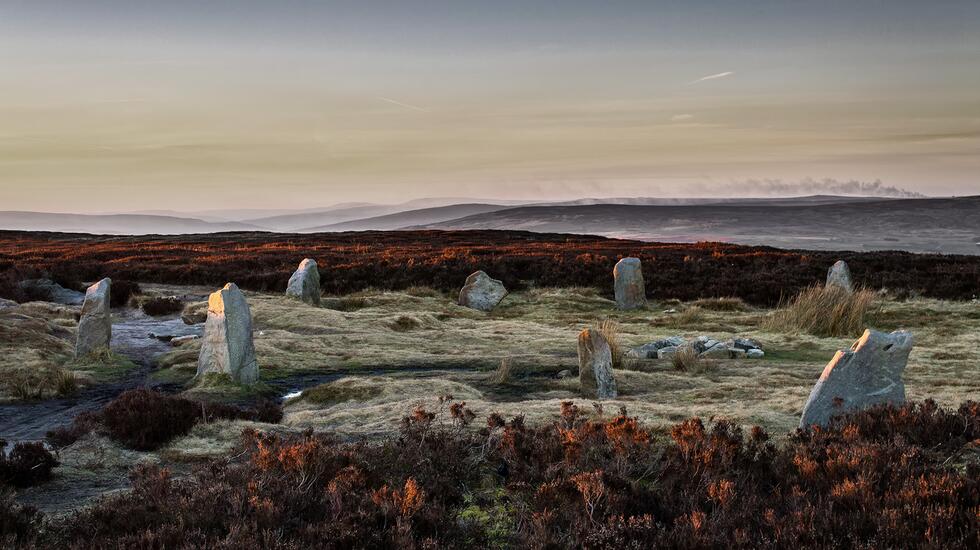 When When the weather outside is frightful, we're pulling on wellies and woollies for a romp through the UK countryside. These walking routes - surrounded by snow-dusted fields, icy waterways and frosty hilltop vistas - will have you embracing the colder weather (and the indulgence of a post-walk pub lunch) as you chug lungfuls of crisp winter air and crunch through Christmas card-like frozen landscapes.

Lacing up our hiking boots and hitting the trails, we've found our favourite footpaths around the country for festive stomps, New Year hikes and all-through-winter walks.

The best one-day winter walks around the UK

Just a 22-minute drive from Bangor, the sharp blades of granite that make up Cwm Idwal provide a cinematic backdrop for a Welsh winter wander, though we'd recommend picking a crisp, clear day for your hike as the peaks are often crowned with clouds. Don't panic; you won't be climbing the Sisyphean geological structure. An easy 5km walk circumnavigates the glacier-carved tarn beneath the (sometimes) snow-dusted peaks.

Routes start from the Ogwen Visitor Centre - look for the flight of stone steps at the back of the car park - and curve towards the lake. You'll want to follow the trail clockwise around the shore. For a more challenging route, continue left when the trail forks at the end of the lake. You'll have to navigate slippery boulders and loose rocks as you head towards the ominously named Twll Du (Devil's Kitchen). If you're wanting to keep it short and sweet, turn right at the fork and follow the lake back to your starting point.

Don't get us wrong, we love the salt-sprayed expanses of stretching sands near Holkham, but Norfolk's most beautiful beaches get their fair share of footfall in the colder months. Sidestep the windswept crowds in favour of a salt marsh stroll half an hour down the coast. The sand dunes and salt marshes around Blakeney offer the same dramatic sunsets and table-flat topography, with a chance to spot seal pups and wintering water birds as you walk, too. Opt for a stroll down the shingled Blakeney Point, passing old watch houses (used to spy 19th-century smugglers), tufted sand dunes and the furious winter waves of the North Sea, or pick your way along the mist-cloaked salt marshes between Blakeney and Stiffkey for softer landscapes of tumultuous skies and wandering creeks.

From Cley Beach car park, follow the shingle ridge for just over 6km, until you hit the dunes, when you'll need to find the track that takes you to the blue Lifeboat House. Due to the breeding seal colony, this is as far as you can walk in winter, so bring binoculars if you want to spot the seal pups. For the 6km Blakeney-to-Stiffkey route, start at Blakeney Quay and follow the mooring posts towards the Norfolk Coast Path.

Moody and melancholic, the tweed-toned moorlands of West Yorkshire offer a Wuthering Heights-worthy landscape for a morning's perambulations. Head out when the undulating hills are frozen hard to walk between glittering grasses under a pearly sky, or don your anorak and wellies on days when the mud squelches underfoot, and you'll be treated to a folkloric landscape of glowering clouds and shadowed hills. Near Bingley, a strange collection of prehistoric stones set in a circle beneath the sky offers an intriguing midpoint on a winter's walk, while the Dick Hudsons pub - the perfect spot to park up before your hike - makes for a cosy post-walk pit stop.

A 6.5km up-and-down route accessed across the road from the pub takes you up to the Twelve Apostles standing stones. It can be completed in an hour-and-a-half. For a longer amble on Rombalds Moor, continue towards Lanshaw Lad, the highest point in the area. This circular 13km trail will take you past other ancient sites, including bathing springs and prehistoric rock art, before your return to the standing stones.

It might not have the wintry wilderness of Scotland's isolated edges or the rugged rawness found in national parks, but Richmond Park's 1,012 hectares of bracken-furred parkland offer a slice of countryside to jaded London urbanites, with the bonus that Richmond is serviced by the District line. Roamed by deer, dotted with ancient oaks and - in winter - prone to taking on a Narnia-esque beauty when a hoar frost arrives, the Royal Park looks at its best on a crisp, cold winter's morning.

Try the Tamsin Trail, an 11km-odd long loop around the park's perimeter that takes in its highest point, King Henry's Mound, offering views of a distant, perhaps frost-dusted St Paul's Cathedral dome. Finish with a visit to The Marlborough for a bowlful of steaming sausage casserole, or - if you're up early - a well-deserved Thameside brunch at The Fat Badger.

If you've overindulged during the festive season, might we suggest a windswept stomp along the coastline east of Belfast in Northern Ireland? The 40km of rugged coastline between Holywood and Orlock might take you most of the day, but, with pretty villages, craggy beach vistas and the chance to spot grey seals bobbing in the blustery coastal shallows, this leg-stretching walk is worth the blisters. Stop for dinner (or the night) at The Old Inn in Crawfordsburn, a cosy bed and breakfast with a small spa attached, then continue onwards towards Bangor and Orlock. The final part of the route offers distant views of Scotland across the wild Irish Sea.

If navigating isn't your strong point, fear not. The route is super-simple. Start on the Holywood Esplanade and join the coastal path. From there, it's a one-way trail all the way.

Looping through picturesque villages, over undulating hills, along tinkling streams and beside hedgerows loud with bird chorus, this 12km stroll through the Cotswolds countryside looks at its best on a wintery weekend, when morning mist gathers in the pastoral folds of the landscape and fields are crisped up with frost. Need a backdrop for your Christmas jumper family photo shoot? Painswick has been picked as the "prettiest town in the Cotswolds" more times than we'd care to count - your photo will be Christmas card-worthy for when next year's festive season rolls around.

Start in Painswick, with a quick look at the village church's 99 sculpted yew trees, before following the Painswick stream out of town and traversing across Painswick Valley. You'll then descend into the Slad Valley. Make time for a brew at historic pub The Woolpack - the fireside seats are highly coveted when temperatures begin to tickle zero - before rolling up the other side of the valley into the hamlet of Elcombe and looping through woodland towards the point at which you started.

Woodland walks in winter? Groundbreaking. But seriously, this 14.5km Shropshire stomp is beautiful come rain, fog or snow. Starting at the Vinnalls Car Park, the route winds through the vast woodlands of Mortimer Forest, passing through fir trees and larch planted by the Forestry Commission in the 1920s, as well as evidence of recent attempts to return the land to its ancient flora, with conifers having been replaced by native woodland species like oak, birch and beech. Remember your hiking boots; it gets muddy. At the treeline, you'll make a steep ascent towards Climbing Jack Common, crossing the hill to panoramic winter wonderland views across three counties, town and country, before heading back into the woods and briefly joining the Black Pool Loop. The woods are increasingly becoming a sanctuary for wildlife, and word on the street is that pine martens are returning to the trees. A left-hand trail will zigzag you through the forest to the Whitcliffe Loop, before you take the next left-hand turn to return to the car park. Worked up an appetite? Head over to The Clive Arms near Ludlow for a well-deserved dinner.

Nearby Mam Tor might be the Peak District's most popular peak, but we're willing to play the contrarian and suggest switching the famous hill's wind-whipped summit for a 14km hike that traces the jaw-dropping cliffs of Stanage Edge. This strange gritstone formation stretches for 6km through the Peak District, providing misty moorland views across Hope Valley, the Derwent and the hulking masses of Mam Tor and Kinder Scout. Make your base The George in Hathersage, a handsome pub with rooms that serves locally brewed ales and tiptop handmade pies. For the hike, you'll head out of the village, passing a historic house that inspired Charlotte Brontë's Thornfield Hall, before clambering up towards the incredible escarpment (avoiding the Pride & Prejudice pilgrims - the Keira Knightley adaptation was filmed up here) and swinging around the back to arrive on top. Watch out for boulderers above your head when you double back beneath the cliffs; the wind-worn stones are a popular climbing spot.