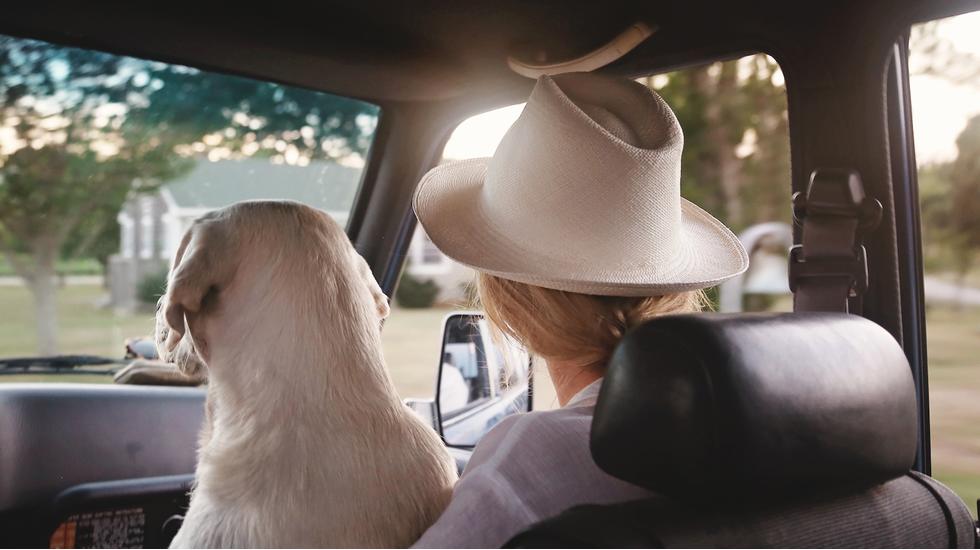 Jewellery Jewellery designer and artist Mary MacGill has been going to Block Island since before she was born and has been spending salty haired, sun-kissed summers there with her family ever since. A low-key alternative to New York getaways like The Hamptons, this small seaside getaway in Rhode Island is the type of place you can return year after year and the spirit remains the same.

It's no surprise then, that her summer escape was the source of inspiration for Mary's first solo collection after leaving a job at David Yurman. She made her first piece of jewellery "hammering metal on a large stone in the yard, surrounded by the ocean," and hasn't looked back since. From the 14k shark-tooth necklace with a single diamond to the wave choker, she continues to channel the barefoot, sun-soaked vibes of Block Island into every piece.

Here Mary MacGill tells us why she'll always come back to Block Island and gives us her insider guide to this lesser-known holiday spot...

What is special about Block Island?

It is unlike any other island on the northeast coast - Block Islanders have worked hard to preserve over 47% of the land there so it's relatively untouched. There are no private beaches, but most beaches feel private. There are very few tall trees on the island, just low lying brush and rolling fields, so you can pretty much see the ocean from anywhere.

What kind of person goes to Block Island?

Block Island is for the barefooted and salty haired, the seekers of remote beaches, the sunset chasers, the mermaids and the fisherman.

Why would you tell someone to go to Block Island?

To truly get away. If you're a city dweller like I am, I like to go to a place where I won't be recognised and I can really let go and live a bit rustically. Nothing against the Hamptons, but it's too much of an NYC on the beach for me!

How do people spend their days in Block Island?

Lounging at the beach and walking enchanted nature trails. The surf out there is also spectacular towards the end of the summer and there's plenty of sea bass to be caught.

Why did you first start going to Block Island and why do you keep going back?

I have been going to Block Island since I was in the womb - my grandfather first started going there after his time in the navy and our family has been going ever since. I keep going back because it is where my heart lives, but also because it is one of the only summer places where you can go back year after year and nothing has changed or got too big.

What is the connection between Block Island and your jewellery?

It's where I came up with my first collection. I had just left a great job at David Yurman and went to Block Island to figure it what was next. I made my first pieces hammering metal on a large stone in the yard surrounded by the ocean. It was completely magical… And why I keep going back.

What are some of the pieces directly inspired by Block Island?

My palette is very oceanic - so all of the aquamarine and moss aquamarine comes from the Atlantic Ocean. The wave cuff as well - it's very loose and summery, as are the fringe pieces which are inspired by Alexander Calder and the summer fields of tall grass.

Where would we find you on a Saturday in Block Island.

You would find me first at the farmers market selling my wares in a white linen dress and a hat (the uniform). It's got a very small town feel with flowers, fresh vegetables and hand-knitted Block Island sweaters… I love it! Then I head to Clayhead beach with my man and our pup for a beach run, a dip and some reading. On the way home from the beach we usually stop by Los Gattitos for a frozen mini margarita and fresh chips and salsa.

My friend Kenneth built the house with a bunch of his friends. It stands on the edge of a cliff and the design is so simple and beautiful - it's all about the surroundings.

Another friend updated an old inn right in town and made it into a lovely little B&B. The décor is super cute and the location couldn't be more central.

Head to Persephone's for breakfast or lunch. Persephone started out at the farmer's market and sold out of her fresh kale and goat cheese frittatas every Saturday. Her stand has now found a new home in town and everything she makes is absolutely delicious.

Perfect for après beach guacamole and margaritas. Sit outside on the deck with friends and enjoy live music before heading home for an outdoor shower.

Hands down the best place for dinner. Sit at the bar and enjoy delicious staples with a slight southern influence from Houston thanks to Texas native chef Berke Myre. I usually go for the Winfields salad and swordfish.

Head to the farmer's market on Wednesdays and Saturdays for fresh produce, local honey, flowers, sculpture and jewellery from yours truly.

My first job! Run by owner Mary Anderson, the Glass Onion is by far the most charming shop on the island. A tiny corner to get lost in, Mary's shop is full of beautiful summer dresses, books and antique finds.

Hike through Rodman's Hollow to find yourself deep in the green. The path lets out to Black Rock beach and dramatic cliff views. It's magical.

Head to Captain Nick's on Sunday evening before catching the boat for one last drink and live music from a Block Island local band, The Booze Beggars.

Rent bikes and ride around the whole island - it takes about an hour and it's a great way to see everything.

The Spring House Hotel for martinis in Adirondack chairs overlooking the ocean.

Captain Nick's for a beer outside.

Best way to get there

Take the Amtrak from New York to New London, the train lets off directly into the Block Island Ferry station.

Or drive to the Westerly airport and fly over in 12 minutes. This is my favourite way to go - it's a beautiful flight.