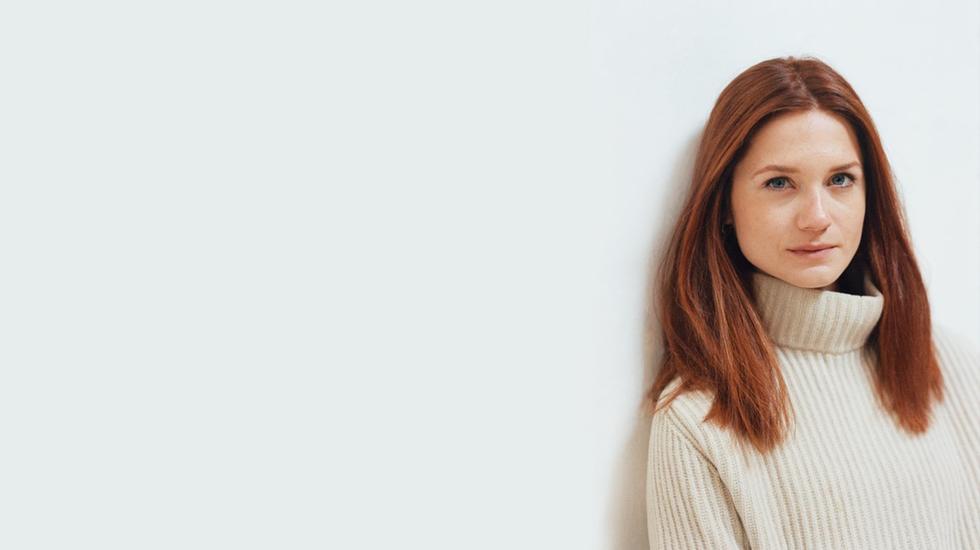 It's It's been well over a decade since a young Ginny Weasley warmed hearts across the globe - the shy, ginger beauty who grew up before our eyes and became a bold, fearless young woman and keeper of Harry Potter's heart.

The same can be said for Bonnie Wright who, at the tender age of 10 and with little acting experience, made her debut in one of the most important cinematic adaptations in history. For 10 years Bonnie was married to the role of Ginny, and over the course of the Harry Potter franchise came of age under a global spotlight. It's safe to say she has taken this in her stride and has navigated the film world with grace, effortlessly avoiding the typical pitfalls of childhood stardom.

Cerebral, stylish and self-effacing, Bonnie Wright is so much more than her flagship role. Now residing in New York City, the 24-year-old is embarking on a new adventure behind the camera as a writer and director. In one of Manhattan's trendiest coffee shops, SUITCASE sat down with the multi-talented starlet to talk about her craft, life in the Big Apple, her philanthropic pursuits and, of course, Destiny's Child...

It's never a good thing when the subject of your interview makes it to your meeting place before you do. In the land of celebrity, things usually run on the star's time and waiting is the game of journalists. As I learn over the course of our meeting, Bonnie Wright's punctuality is one of the many reasons she is not your average world-famous actress.

I find her tucked away in the corner of La Colombe and after a few pleasantries, we launch immediately into a conversation about her foray into writing and directing. Bonnie describes her consistent effort "to set that self-discipline" - making sure that each day reflects a proper day's work. Currently in the process of writing her first feature film (she has already written and directed a short film) Bonnie's new, self-appointed gig is a whole different ballgame from learning lines in a trailer. She is keen to emphasise the dedication and self-regulation required to create her own work.

That said, her decade spent in the Harry Potter franchise has not been a bad education. Working with some of the greatest British talent, including world-famous actors, directors and producers, has afforded Bonnie a solid understanding of what goes into creating a great film.

"Because I started acting at such a young age," she explains, "I had no idea where the journey was going to take me. As a curious kid, on all the Harry Potter films, I became interested in filmmaking in its entirety."

In the evolution of her craft, Bonnie hasn't limited herself to one side of the camera. When I ask her which part of the world of cinema she prefers, she explains how intertwined acting and directing really are.

"Often, I'll be writing and the idea of walking onto a film set in front of the camera throws me. And then sometimes the other way around, when I've been acting I'll be like 'Oh God, I don't want to go back to my desk to write!' But they inform each other so much. It is a collaborative medium and the boundaries between jobs often cross. Especially when you're an actor and you're working so much with the director. For me, that's the funnest thing about being an actress: working with the director and working with their vision."

She goes on to emphasise the importance of synergy when creating a successful film. "If you're not a team player in the film industry it becomes very hard to share your message - and what's the point of sabotaging your own work? It's interesting to see the methods of different people, in the same way that it's fascinating to watch another actor and see how they run a scene."

If all of this sounds erudite, it's because, well, Bonnie's a pretty intelligent gal - and she perceives the world of acting through a particularly academic lens. No surprise, then, that her acting heroines appear in intellectual dramas rather than box-office rom-coms.

Hoffman is a particularly interesting choice. The actress, who you'll probably recognise as Adam's manic sister in GIRLS, is known for her compelling but rough-around-the-edges presence. "There's something that really draws you in with her performance," Bonnie muses. "It's something accidental. She has such an open and giving face that you can't help but want to be pulled in by her."

I ask Bonnie whether it's a coincidence that so many of her roles have been in literary adaptations. According to IMDb, she's currently filming A Christmas Carol and back in 2013 she starred in The Sea, a British-Irish drama based on the novel by John Banville.

"No, no - it's coincidental," she laughs. "But I'm about to do my first adaptation of a short story into a short film, which is a new thing for me. It's by an author called A.S. Byatt and it lends itself so neatly to film; the description, the dialogue, the pace are all so easily transferable. So it's going to be a joy to adapt. But at the same time, it's a different realm of directing someone else's idea or vision. How close do you stay to the material? How much do you want to put a stamp of your own on to it?"

The current feature film that she's working on, according to Bonnie, is going to present even greater artistic challenges.

"Anyone can write 10 pages," she says jokingly. "Writing a huge script that has so much to do with plot, specific screenwriting techniques and devices is a whole new world to me. Even at film school all the work we did was short-form. We obviously studied feature film, but we never got to make one over the course of a three-year degree, so this has been really interesting."

As a curious kid, on all the Harry Potter films, I became interested in filmmaking in its entirety

As she ventures down this new career path, Bonnie has appropriately adopted the nomadic lifestyle of the writer. Having recently relocated to New York, she is happy to go where the winds take her as she wraps up various projects, and LA may be next. That said, she's making meaningful connections as she goes, and explains how surprised she was to be so readily embraced by New York's film community.

"I think it's the American mentality of being forward," she says. "When I made my first short film in New York, I managed to create this amazing group. They were all so giving, so great at their jobs and so enthusiastic. I think anything is possible here."

Having done the rounds in Hollywood, however, Bonnie is equally cautious of those who are all talk and no walk.

"You also need to take it with a pinch of salt. People can promise you the world, but you can't start celebrating too soon."

With this on the table, she goes on to discuss the culture of self-promotion that's so ubiquitous in the United States - certainly not a quality that the average self-deprecating Brit possesses.

As if writing, directing, acting and discovering New York weren't enough to keep Bonnie busy, the Renaissance woman also devotes a significant amount of her time to the causes she cares most about. She helped promote the Global Citizen Festival in Washington DC back in April this year and she continues to work with Oxfam, an organisation that is dear to her heart.

"I first went on a trip with them to Senegal when they were doing a whole push about the food crisis in West Africa," she recalls. "They decided they wanted to push the story before it got to a level that would be a hundred times more expensive to save. So I travelled with them and through that trip they asked me to come on board long-term as an ambassador."

When you're having to speak up for your own work, you have to sell yourself in a way

"Even though the focus there was on agriculture and food shortages," she goes on, "I'm now working with them on education and women's rights because of the audience that I have. I know that I can connect with people on that topic."

Bonnie has also acted as a mouthpiece for the Global Poverty Project, writing articles and appearing on TV for their campaign Live Below the Line, which challenges people to live on the equivalent amount of money on the extreme poverty line for five days.

Bonnie remembers her first attempt last year in New York: "I literally bought pasta and bread and had no energy and awful headaches all week. It really makes you realise that in a city like New York or London, you can't just sit down in a nice warm place and buy a coffee. You realise just how much it segregates you and how alienating it is."

Needless to say Bonnie is one of the more down-to-earth actresses I have had the pleasure of meeting. When I ask her what she misses most about London she steals the answer I almost always give.

"I miss Sundays in London. I miss hanging out at friends' houses, cooking and watching TV. People never cook here! People never sit at home and have those leisurely days. I miss that."

But it's Bonnie's response to my final question that makes me wonder whether I may have just found my kindred spirit. What's the craziest, most exciting thing that's happened as a result of Harry Potter stardom?

"I got to meet Destiny's Child when they were still together and dance on stage with them. That was pretty fun."