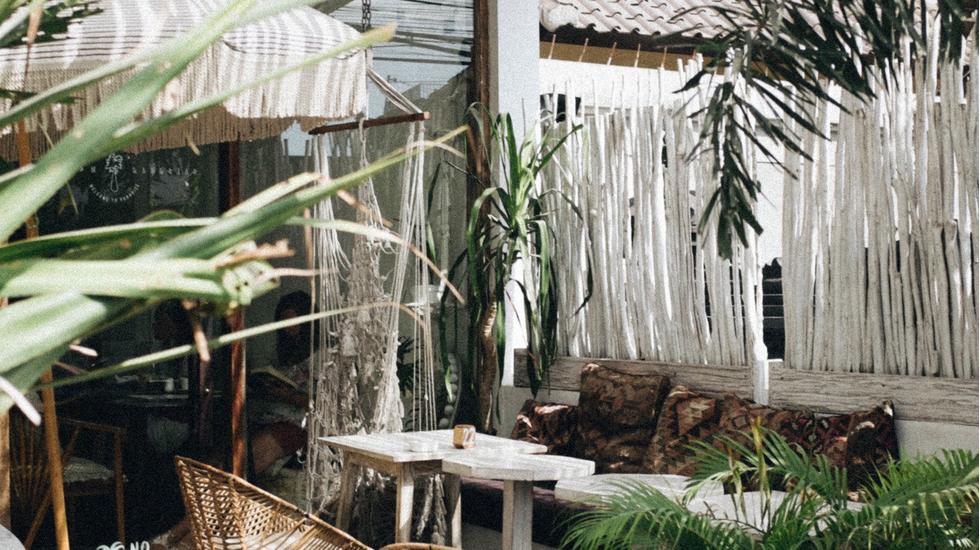 Sprawled Sprawled between the areas of Kerobokan and Echo beach in Bali is the neighbourhood of Canggu. This fishing village has been popular with the surf crowd since the 1970s with big wave breaks, roadside warungs (local, family-owned eateries) and iconic institutions like beachside beer garden-Old Man's and cult motorbike shop-Deux Ex Machina luring repeat visitors.

"Looking back 10 years, it's hard to describe Canggu as anything other than a tranquil, coastal village," says George Garrow, owner of The Slow hotel which is based there. "The roads were quiet, there were just a few spots to eat or get a massage, and rice fields and free-roaming cows were a more common sight than tourists."

Today, the scene is quite different. With Kuta having turned into a hub for mass-market beach resorts and nearby Seminyak overrun with splashy, selfie-obsessed tourists, Canggu has come into its own. The last five years have seen a slew of modish openings which have attracted the cool crowd and earned the neighbourhood the moniker of the "Williamsburg of Bali". The natural vistas of lush paddy fields and volcanic, black-sand beaches still exist, but now there are juice bars, independent stores and bohemian beach clubs overlooking them.

"There's been development at such a quick pace as tourism moves from Kuta and Seminyak up here to Canggu," says Fiona Bond, owner of Parachute restaurant located in Berawa. "It used to be just a handful of warungs and now there's a café on every corner and a smoothie bowl in reach no matter where you turn."

Despite the rapid growth, the neighbourhood continues to channel a casual, eclectic vibe that attracts creative folk, local and expat families as well as the Canggu hipsters. Here's our pick of green hotels, vegan joints and sustainable boutiques worth checking out before they go mainstream.

Gorrow and his entrepreneur-cum-model wife, Cisco, bought some land in Canggu with the intention of making it their family home, but after seeing the neighbourhood’s rapid transformation they converted it into a 12-suite boutique hotel. The space features native wood screens, inverted gardens and void spaces in a style they call “tropical brutalism”. The hotel hosted its first edition of the Oh So Slow music and arts festival earlier this year and makes a strong effort to be eco-friendly. Head chef Shannon Moran believes in nose-to-tail dining at their restaurant, while toiletries are made on site using natural materials.

This plastic-free yoga resort is made entirely out of repurposed Indonesian homes which have been imported from all across the archipelago. Take a hatha, vinyasa or meditation class in their leafy, open-air studio or indulge at their Merapu Svaasthya spa which offers therapies like hot-stone massages, banana-leaf body wraps and crystal-salt scrubs. The American founder, Thomas Talucci, had a vision to create an authentic Indonesian experience as opposed to the carbon-copy villas that are overcrowding Bali. He has also hired his staff from 20 different islands in the vicinity.

Antique collector Anhar Setjadibrata started the Tugu chain to showcase his staggering collection of Indonesian relics and now runs it with the help of his daughters, Lucienne and Annete. The Canggu branch opened 30 years ago and has suites decorated with original Balinese art and furniture from the early 20th century, as well as a contemporary Japanese restaurant housed inside a reconstructed Kang Xi period temple. Drop by their bar, Ji Terrace By THE SEA, to watch the sunset at Batu Bolong beach, sip Asian-inspired cocktails and groove to beats spun out by live DJs.

The best time to visit this café-cum-gallery is for breakfast because their coffee, smoothie bowls and breakfast offerings are second-to-none. Australian owner, Maree Suteja is especially proud of the community she’s built up of neighbourhood regulars, repeat traveller guests and the artistic crowd. “I always found Seminyak too busy,” she says. “Canggu was very affordable for retail space back in 2014 and had similar vibes to Byron Bay. When we first opened, the only cafes here were Deus, Canteen and Betelnut. Now they are on every corner!”

This Californian farm-to-table restaurant sits under a vintage, olive-green parachute and has a bakery, tonic bar and farmer’s market at the weekend. Executive Chef Jacob Burill helms the kitchen while his wife Fiona Bond is the sustainability director who handles their organic farm and ingredient sourcing. The lunch menu features a plethora of fresh salads while dinner offers plates like shrimp with roasted tomatillo sauce alongside a solid wine list.

A stylish lifestyle café with exquisite ceramic ware, contemporary home textiles and a vegetarian-friendly menu, Quince is owned by Australian-born Michelle and her Balinese husband, Armen Jaya. “We looked at other areas but Berwara in Canggu seemed to have an ambience that suited us most,” says Jaya. “There’s a mixed crowd of local Balinese people, Indonesians from neighbouring islands as well as a large number of expats mostly working in creative fields.” The most popular dish at Quince is herb and garlic smashed avocado, boiled eggs, feta cheese and microgreens laden onto multigrain toast.

There’s nothing shady about this tropical garden café which serves vibrantly coloured vegan (as well as gluten- and dairy-free) food on pristine white tables. From their nori bowls to raw banoffee cheesecake, the food here is healthy but doesn’t compromise on taste.

This trio of gourmet cafés is owned by the Good Food Brotherhood hospitality group. Watercress located in Balu Betig is the original hipster hangout that lured people to visit Canggu in the first place. Milk & Madu opened soon after to resounding success but got destroyed in a fire – the first day it reopened they received over one thousand visitors. Their next venture, The Common, and has something for everyone, from vegan breakfast bowls and house-made coconut feta to crispy chicken burgers and flaky croissants.

This beach club located on Batu Bolong beach has an unpretentious vibe along with an ideal location to watch the sunset. The crowd ranges from surfers to families and in-the-know travellers. Drinks are plentiful and menu has a strong focus on locally and ethically sourced seafood. Keep an eye out for their weekend events like Sunday jazz night.

The famous La Familia group which owns La Favela, La Laguna and La Plancha have opened this sustainable beach club on Echo Beach in Canggu. The entire space is made from reclaimed wood and has a sailor theme running throughout with fishing nets and rods, woven chairs and vintage buoys. Their straw hammocks are so comfortable you could lounge in them all day long, sipping cocktails and feasting on line-caught grilled fish.

This slow clothing brand founded by Lena Catterick uses non-GMO textiles and plant dyes to create a collection of womenswear and children’s clothing. Its USP is comfortable feminine cuts in neutral tones like camel and cream. The store also has a curated section of footwear, organic intimates and home textiles.

An activewear label designed by Natasha Matovic, Nunemone is known for its bold, bohemian printed collections, named after Indian goddesses. Choose from leggings, bralets and crop tops which are stocked at Serenity Eco Guest House’s yoga pavilion and produced adhering to fair-trade principles.

Pena uses her Latin roots as inspiration for her line of clothing and jewellery which has been spotted on Beyonce and Kim Kardashian. In her Canggu store you’ll find fringed kaftans, tiered maxi dresses and gladiator sandals, but we recommend you made a beeline for her chunky neck pieces which make quite the statement.

When you’re tired of seeing the distressed furniture and animal-head masks ubiquitous in Bali’s home shops, we recommend heading to this tropical concept store in Berawa. The collection here is carefully curated: one room houses vintage artefacts sourced from around Asia and Africa; another showcases indigo-dyed home textiles and a third sells emerald-green ceramics.

Support this local surfboard factory which uses high-tech construction techniques for strong, durable surf gear. Redz also makes eco-boards with sustainable materials and you can take your own design to them for customisation.

Sip cold-pressed juices, espresso or ginger tea while your fingers get a chic makeover at this on-trend spot. The salon uses chemical-free polishes like NAILBERRY and L’Oxygéné even offers treatments for children.