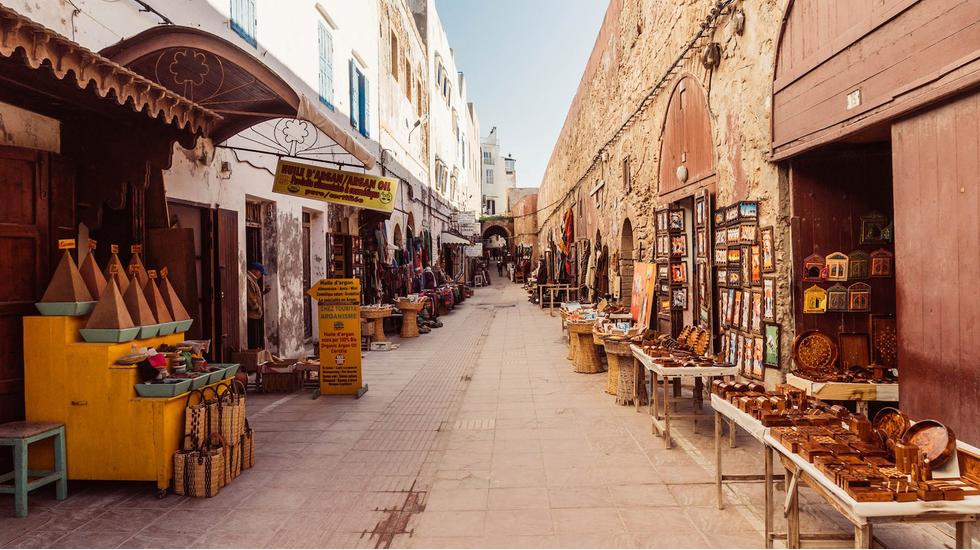 Past Past evenly placed palm trees we drove through the white city and into the downtown area. Already I could sense that Casablanca was unlike other parts of Morocco I had visited; a far cry from the chaos that lies within Marrakech's red walls or the boats that bob in Essaouira's lively harbour. Casablanca is big and bold, often left off the tourist trail yet economically the country's greatest power.

I found myself there with a couple of days to explore before my next assignment began. I knew there was a mosque, a grand thing which stood on the edge of the Atlantic, but beyond that very little. But by definition the unknown brings the greatest surprises - and I was not disappointed in Casablanca.

On my first morning I hunted down a traditional Moroccan breakfast and got my first taste of the city's café scene. A fresh pot of mint tea, flaky msemen breads and a bowl of spiced porridge sat before me as the world rushed by the whitewashed buildings in the new part of town. Each building held so much character, browned by traffic pollution which blows through the streets on the salty sea air. and sea air which permeates the streets each day. I walked through downtown and past the bustling market streets to find the Hassan II Mosque.

In the morning, it's desolate, but by evening it's brimming with life, play and laughter. As well as being Casablanca's centre of worship, the mosque is also the centre of community in the city. Families gather here or on the adjoining beaches to watch the sunset. They pray then play sports or discuss the daily gossip. One dusky evening I get my hands painted in delicate henna by a bunch of women sat on one of the outer walls. My unfortunate French doesn't quite pass the test to have a decent conversation with them, despite their gleaming smiles. But we both sit and watch the sun float into the Atlantic Ocean with nods of appreciation for Casablanca.

The next day I wandered down a street towards a piece of street art I had spotted, and stumble upon the maze of Casablanca's old medina. Unlike the blue walls of Chefchaouen or the golden wash of Fez, I'd never before heard a thing about the streets of old Casa. What I found was a mirage of purple alleyways, rainbow washing lines, white dressed ladies dressed in white carrying shopping bags and bustling produce markets. I instantly loved every corner of these streets, and spent the rest of my time in Casablanca wandering all corners of them, looking to get lost in the maze of lilac.

One afternoon, I am spotted by a local woman who covers her round figure with a frilly apron and an ear-to-ear smile. She pulls me into her house, feeds and waters me and introduces me to all her family. It's a perfect example of the friendliness I experience in my days in Casablanca. While locals in Marrakech can be somewhat hostile towards tourists, bored after years of foreigners coming into the city in inappropriate clothing, and photographers pushing camera in their faces without permission, in Casablanca they are open, friendly and curious. Their city doesn't yet appear on the front of guidebooks or travel magazines. And in my days exploring this wonderful, busting city, I feel like it might just be the country's best-kept secret.