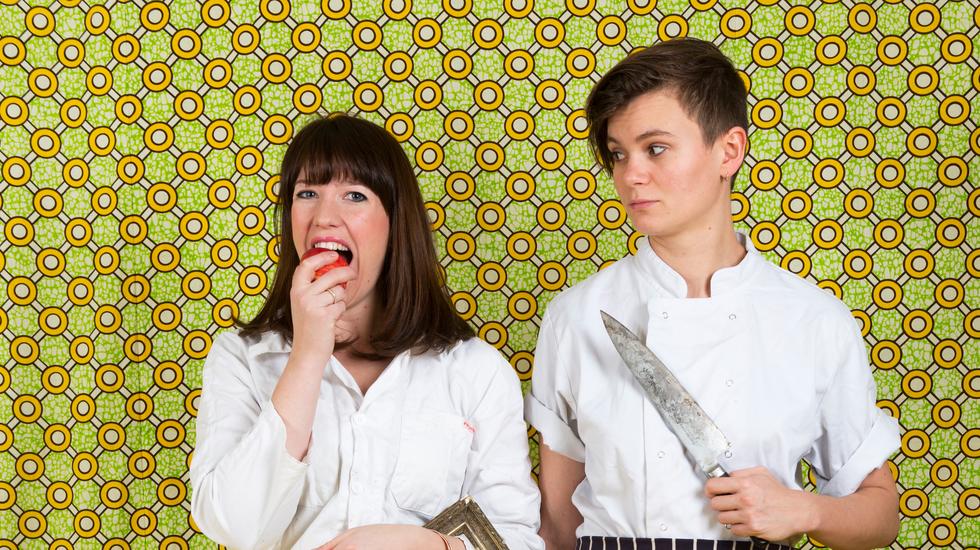 Chef Chef Ellen Parr spent her formative years working at Moro (you can still taste the Middle Eastern and Spanish influences in her food). Today, she heads up two food-focused companies: Lucky & Joy and The Art of Dining. The latter is co-led by set designer Alice Hodge, whom Parr met at university in Glasgow.

From National Trust houses to the Dalston Boys Club, the venues for Parr and Hodge's pop-up feasts are as variable as their thematic suppers - which have ranged from wartime rationing to dining on the moon.

The daughter of widely celebrated British photographer Martin Parr, Ellen collaborated with her dad for a one-off Art of Dining event in Tokyo titled "Say Cheese - The Photography of Martin Parr in Five Courses". Having been served fish and chips in a Tesco bag and lurid orange fairy cakes (which were in fact moist carrot cakes served with a fragrant chai), diners departed with a signed set of Martin Parr postcards depicting the meal they ate. Family fame considered, it's perhaps surprising then to learn that Ellen doesn't travel with a camera, "just an iPhone".

While wittering away, we pinpointed why the best holiday destinations are those dictated by food, shortlisted the leading restaurants in London and decreed edible souvenirs the matchless holiday gift.

Where are you from and how has that shaped and inspired you?

I'm from Bristol, which is now a great foodie city - it wasn't so exciting when I was growing up. I have spent the majority of my adult life in London and can't think of a better city to inspire me creatively and food-wise.

Tell us about The Art of Dining; what is it and how did it come to be…

The Art of Dining is a concept that pairs art, set design and food together to give the customer an exciting themed experience. Alice Hodge and I started out doing one as a fun experiment - eight years later we are still going strong.

What is your first food memory?

I remember having a goats cheese tart in Galway when I was really young and loving it so much. I still think about it all the time.

If you could go anywhere in the world for dinner tonight, where would it be and what would you order?

I'd go back to the night market in Xi'an in China and order signature dishes from every stall.

What destinations inspire your culinary creativity?

I'm inspired by everywhere I go as I love all sorts of food, but I've found trips to New York, Hong Kong, Bangkok and Shanghai particularly inspiring.

What have been some of your favourite projects to date?

My favourite Art of Dining project was a 70s-themed affair based on Abigail's Party. I loved everything about it - the set, the music and the fun things we could do with the food. Working with the National Trust was also memorable. It was amazing to cook in such beautiful settings and design menus based around the history of the houses.

That's too hard to answer. I live in Hackney, so I am most familiar with the restaurants there. I also love eating in Bermondsey and Soho.

Your top three restaurants in London…

1. Silk Road in Camberwell serves the most amazing Xinjiang food.

2. The Dusty Knuckle Bakery has the best sandwiches.

3. The Heron near Paddington plates up some of the best Thai food in London.

A few different things. We are already planning a big Christmas party called Merry Miami. We're thinking about running pop-up master classes and I am also in the process of opening a restaurant with my other company, Lucky and Joy.

You mentioned you grew up in Bristol. Where should we head when we visit?

Head down to Root for some delicious seasonal food. The Nova is great for a pint and the Martin Parr Foundation is a photography-fan must.

What's your take on souvenirs?

My souvenirs are usually edible. Recently I've got super in to bringing home good dried oregano from wherever I go and putting it on everything.

Do you travel with a camera?

I don't travel with a camera, just an iPhone unfortunately. I always say I want to change that and get a camera, but I have been saying that for 10 years so who knows if I ever will…

What guides your holiday selection?

Definitely my number one is good food. I obsessively look for the places where locals eat and spend way too much time researching.

What do you think makes a good hotel?

Nice breakfast, big beds and somewhere to swim nearby.

I'm off to the South of France to drink rosé and eat cheese.

Have you any in-flight rituals?

Something to Live For by Richard Roper.

CODE app is great for discounts.

Go to gay bars - they are always the most fun and coolest places.

I seem to always pack all the clothes that I never wear at home and still don't wear on holiday; I'm determined to master the art of packing light.