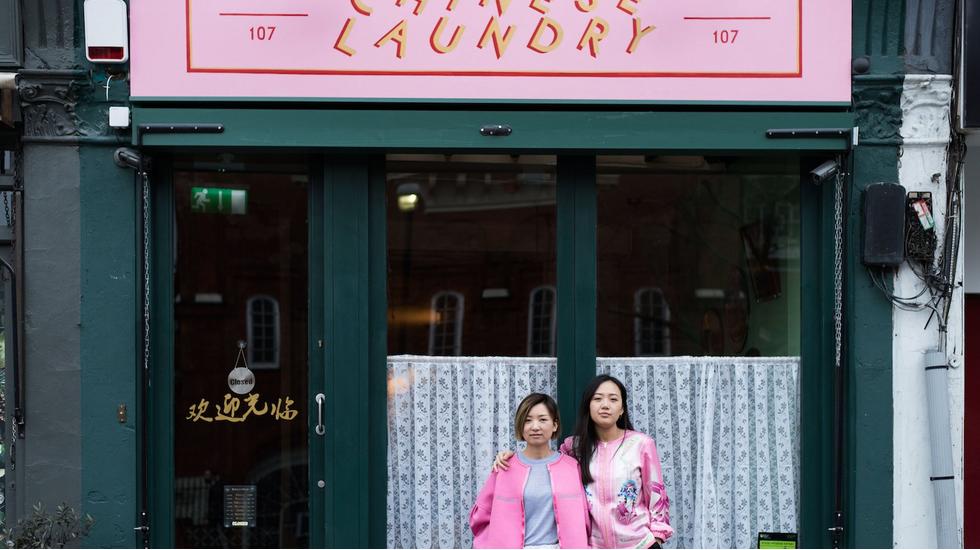 Words by
The Curious Pear
Photos by
Issy Croker

Good Good old Upper Street. Islington's main drag has no shortage of places to fill up on great food, earning it the nickname 'Supper Street'. And amid the ramen bars, Turkish grills and elegant little bistros, a new spot has opened its doors. With an interior that would make Wes Anderson drool its candy pink exterior sign, Chinese Laundry is hard to miss. Run by best friends Tongtong and Peiran, the restaurant specialises in the regional Chinese home cooking which they grew up eating. Like stepping into the cosy living room of the Chinese grandmother you never had, the interior is awash with various kitschy antiques and patterned wallpaper.

Sharing is order of the day, with food designed to be grabbed, torn and slurped: lobster tail with Chinese pancakes, caviar and orange; sweet, basil-chicken popcorn; pillowy mantou buns; northeast-style glass noodles. Brunch is also a winner, with freshly made rice and peanut milk, stuffed steamed buns and purple sweet potato omelette with mustard green and creme fraiche. This is not the kind of Chinese cooking that Londoners are used to. As well as punchy ingredients and imagination, Chinese Laundry's food is cooked with a nostalgia for the country its owners left behind. Creating something unique in London is a tall order, but Tongtong and Peiran have done it. Here, they tell us how. While we try to keep our eyes off their buns.

Tell us how you two became friends?

Peiran: We were introduced by my tutor, who thought we would get on so organised for us to meet in a cafe near my university in Beijing. Tongtong: We then moved to London together and both studied at the Royal College of Art. We were roommates and started to cook together.

Was food always something which connected you?

T: Yes. We eat and cook and explore ingredients together, so now we understand each other's food language very well! I sometimes describe an imaginary flavour in an abstract way and Peiran will understand me.

Where did you both grow up? What was the food like during that time?

T: I grew up in Hubei in Jingzhou, an ancient town in the middle of China. With lots of rivers and lakes in my hometown, rice and fresh-water fish are the main ingredients. Even in winter, we also had access to really special vegetables which can't be found in other parts China. Every family had their own pickle jars and would make their own cured meat, fish or sausages at home, while my grandparents also made fermented rice wine. Home is the best place to eat. We also have a very big breakfast culture - fresh handmade noodles made in local workshop then cooked in a braised spicy beef stock.

P: I was born and brought up in Dalian, a coastal city in Northeast China. Food was limited because it was before there was any food transportation between north and south. Every winter big trucks drove into our neighbourhood and they always carried the same thing; one brought daikons, the other napa cabbages. We lived in the old block built in the era of Soviet occupation and you could see all the huge fermenting ceramic pots along the hallway of every neighbourhood. That's the basics of winter supply in Northeast China - dried and pickled daikon, fermented napa cabbage, a box of apples and potatoes. I went to my grandmother's city a lot when I was little, which is even further north and takes over 30 hours by train. Normally in winter it's around minus 30 degrees and the only fruit we had was 'frozen pear', which is incredibly unique and delicious. It's black on the outside from the frost and fermentation process of nature - you can't find it anywhere else. In the summer it's a totally different scene. I would go foraging with my dad every Sunday, into the hills or by the sea. I grew up eating seaweed and mushrooms, wild plants and flowers - anything edible that we could find.

Were your childhoods similar, in terms of food and cooking?

T: It was completely different. Where I was from we had lots of vegetables which couldn't be found in Peiran's hometown. While Peiran got to eat a lot of seafood, I can't name more than five sea fish. Her hometown is very cold, so they have lots of preserved, pickled and salted things. My childhood was more about street food, much which I couldn't find when I moved to Beijing, and some which isn't on the street at all anymore.

Who taught you about food growing up?

T: My grandparents, street-food sellers, my aunt and the head chef at my father's restaurant. My mother didn't teach me because she didn't want me to be a housewife.

P: My grandmother, my parents and my stepdad, who owned a Chinese restaurant in a small town in the US.

What do you think are the main differences between China and England's cooking and eating cultures?

T: Priority of eating and cooking in people's life. It's the most important thing for Chinese people.

P: Cooking is very family oriented in China. Every family has their own secret recipes passed from one generation to the next. People there are mad about food. Most Chinese people can cook, so eating out is fairly cheap.

How did the idea for the restaurant come about?

T: Originally, we wanted to do a fun thing in a street food market. We had a lot of crazy, imaginary conversations. Since I grow up in my father's restaurant, I always loved the idea of sharing the food we love with different people and creating a great scene for an event and moment in their life.

What inspired the decor?

T: Our childhood memory of home.

P: An 80s and 90s home in China, which we hoped would be interesting to our customers and transport them to a China they may not know - a playful and happy place to dine.

What is it about the 1980s that made you want to recreate it?

T: We always hear about the 80s from our parents, who say that it was the best decade in recent Chinese history. It was just before China's economy boost and everybody lived like an artist. With a shortage of material goods, spiritual pursuits were a trend among young people's. According to my father, if you couldn't write a poem or you don't know about photography (or something arty), it was difficult to attract a girl. By the time we grew up it was just the end of that beautiful period. Food was mainly handmade by local farmers and workshop owners: noodles, tofu, pickles, pastries (including steamed buns, bao, dumpling pastries and glutinous rice balls) could be bought from farmers markets in the morning and had to be consumed the same day. This is what we're trying to recreate at Chinese Laundry.

P: Young people were obsessed with new poems and they went to ballrooms after work and school, or played guitar in the park. It was a vacuum in space and time, very pure and idealistic.

Tell us about the food. Is it traditional Chinese? Is any of it particularly unusual for Londoners?

T: Yes, most of the dishes are traditional Chinese. I think the Mei Cai Kou Rou (twice-cooked pork belly, sliced into 3mm pieces then steamed for hours with preserved vegetables and served upside down) is very unusual for Londoners.

P: We serve Chinese-style brekkie, which is probably also quite unusual here.

What have been the high and low points of opening a restaurant so far?

T: Low point is physically it's quite challenging and we need a bit more sleep! High point is that we are cooking everyday.

What are you excited about in the future of Chinese Laundry?

T: We want to produce our own cured meat, pickles, noodle and rice cakes, like the market in my childhood memory, as well as our own vegetable farm. We dreamt of being farmers as well as chefs and we hope to bring more hidden treasures from China - it's so big and most of the food doesn't travel out of that region.

Where are your favourite places to eat when you go to China?

P: My last experience in China was in Shanghai, where I had my old studio. I love Jia Jia soup dumplings on Xin Zha Road, Lao Ji Shi. There are just so many super delicious spots in Shanghai.

Where do you go for dim sum?

T: To be honest, I've only had twice dim sum in my six years in London, so can't really recommend any!

T: Chinatown Bakery do the kind of bread I had when I was a child - early 90s style, very tasty. They open at midday but if I go to Chinatown I will buy some to take home. I'm also really good at making myself a breakfast feast. I need to eat a lot in the morning.

P: I go to Pavilion Café in Victoria Park a lot as it's so close to me. I love my breakfast by the lake.

P: See Woo, Long Fung and New Loon Moon - they're all in Chinatown.

And for something a little more pricey?

Best bar at the moment?

Where do you take friends and family when they visit?