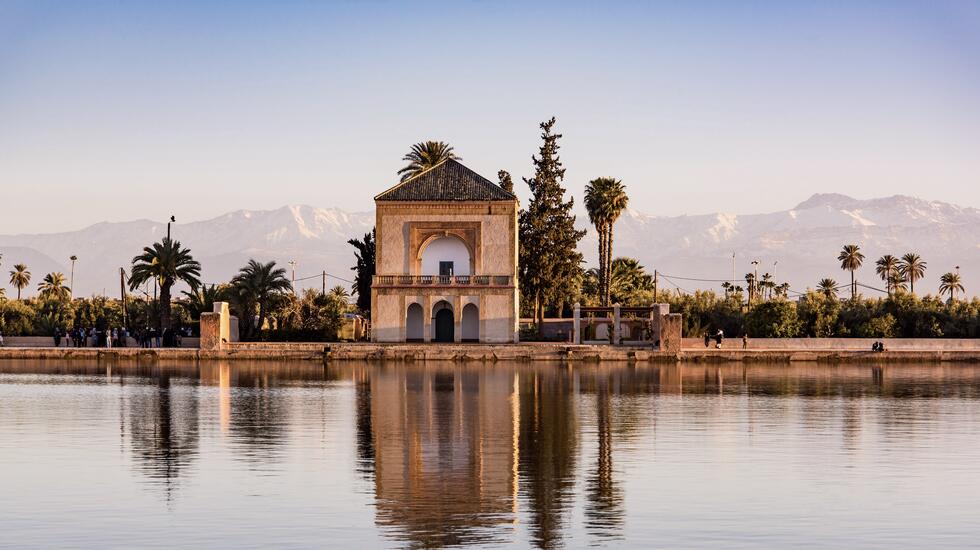 Intoxicating Intoxicating Marrakech is as boisterous as it is beautiful. An enthralling city of contrasts, its labyrinthine streets of burnished sandstone invite exploration, prompting most to make straight for the medina after stepping off the plane, flitting among the crowds in the souks of spice merchants, leather sellers and lantern makers for a sense of its historic Berber origins.

There's a magnetic energy to the city's ancient interior - a buzz that requires most to seek tranquillity on a rooftop terrace or in a dimly lit hammam once in a while - but beyond the souks, you'll find the destination's future. Like other Moroccan cities, Marrakech has a dual identity; its ancient trading centre backed up against a colonial-built quarter of palaces, cafés, wide boulevards and leafy gardens. Escape the intensity of the medina and you can explore modern Marrakech, which fosters a leading craft industry, independent homeware boutiques and the vivid colours of those intricately designed gardens.

Ever international in outlook - but distinctively itself in character - this North African city prides itself on its local craftsmanship and instinctive hospitality. Plenty of design-driven, locally owned independent businesses make use of both, and now share the streets with French-influenced hotels, rug workshops run by Aussies and LA-esque concept stores. The growing community of foreign residents is testament to the city's magic: most of us dream of moving to the places we visit, but rarely do destinations entice so many into actually making it their home.

Streets of gold: a complete guide to Marrakech, Morocco

Philomena Schurer Merckoll's seven-bedroom riad is pure magic. Homely in atmosphere, Riad Mena feels like a private house owned by your very chicest friend. Filled with art, the boutique riad is serene and spacious, with multiple living rooms dotted throughout the property. Our favourite rooms are The Eileen Gray, which is made for design lovers with a penchant for mid-century furniture, and The Writer's Den, the smallest room of the house, which is primed for writing and daydreaming. Spot something you love here? Stop by The Pink Door, a gallery-boutique situated in an adjoining house, to pick up something similar.

This 19th-century riad designed by Jasper Conran is an elegant sanctuary composed of five suites, a lap pool set within a fragrant garden, and various dining spaces and places to perch. The understated bedrooms ooze old-school glamour - four-poster beds topped with Egyptian-cotton linens and the like. The Casablanca, the largest suite, comes with its own private terrace overlooking the courtyard garden, with key features including an impressive zouac ceiling, antique furniture and art from Mr C's collection. Head up to the roof terrace to dine under the arbour and be wowed by attentive service and munificent, multi-course meals. If the heat gets too much, make a beeline for the lemon-hued salon, where floor-to-ceiling French windows add an airiness to sun-drenched white surrounds.

Forming a douar (a village), Beldi Country Club comprises restaurants, pools, a spa, boutique hotel, souk with umpteen stalls selling everything from pottery to carpets and glass, olive orchard, tennis court and more. Thanks to its location away from the bustling city centre, a stay here is the perfect balancer to Marrakech's freneticism. With 42 spacious suites in all, each blending Moroccan tradition and chic French design, it's easy to be smitten with this place - cue a jaunt to the rose garden, composed of 15,000 blooms, for further convincing. On night one, dine amid fragrant gardens at Le Palmier Fou, followed with a tipple at the Cactus Bar.