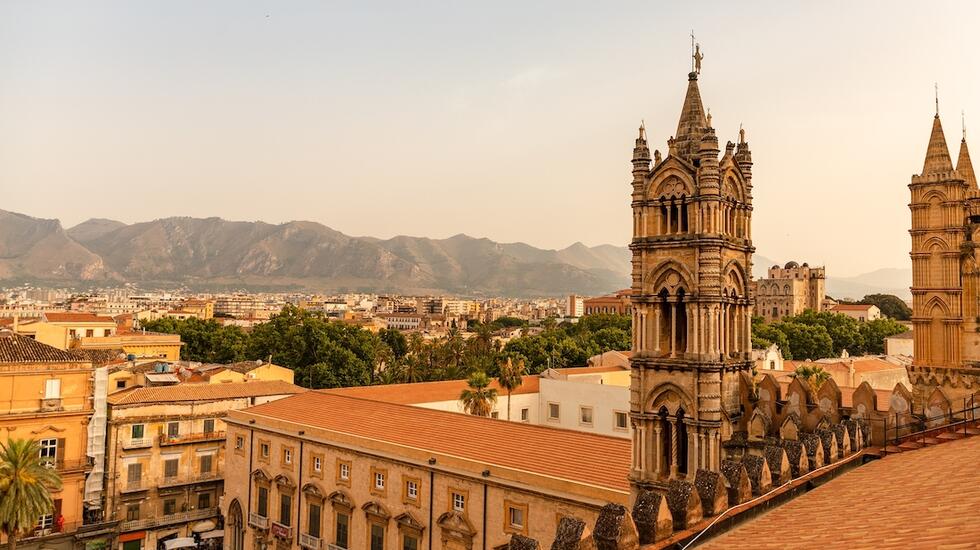 It It takes a while for Palermo to win you over. Blaring car horns, a punishing summer sun and little courtesy paid to visitors (you'll find few multi-language menus in this proudly Sicilian city) can - at first - feel trying. But perseverance is rewarded. Once in the grips of the Cosa Nostra (Sicilian mafia), Palermo has battled forwards since the 90s, when a series of car bomb attacks shook the city, and the world.

Since then, a steady resistance against mafia control has breathed new life into the ancient city. Palermo was recognised as Italy's Capital of Culture in 2018 - a remarkable feat for what had, 20 years earlier, been a battlefield. Today, a gentle wave of creative ateliers, provenance-led gelaterias and restored palazzo apartments colour its crumbling, storied streets.

Market life, left, and rooftop views of the city.

For years, Palermo's neoclassical opera house and Byzantine cathedrals garnered nothing more than a cursory day trip for island circumnavigators, but this phoenix-like city deserves a longer look. Bolder, spicier and sweeter than the rest of Italy, it's a destination that has risen from the ashes. Dive in and discover it for yourself.

Renaissance city: where to eat, stay, drink and shop in Palermo, Sicily

As Giuseppe Tomasi di Lampedusa wrote in his famous Sicilian novel The Leopard, "If we want things to stay as they are, things will have to change". He'd surely approve of the work his adopted son and daughter-in-law, Gioacchino and Nicoletta Lanza Tomasi, the Duke and Duchess of Palma, have done in restoring the 18th-century palazzo where he penned the lines. The property has been divided into 12 luxurious apartments, with an elegant decor featuring antique furnishings and classic Sicilian tiling. The apartment-style stays all have fully equipped kitchens, WiFi and air conditioning.

For a splash-out stay away from the city centre, check in at the magnificent Villa Igiea, which has been attracting jet-setting royalty for 122 years. Built by an aristocratic Sicilian family in 1900, "palazzo" would be a more accurate description for this opulent, peach-hued crashpad: expect original art deco panelling, marble flooring and sprawling subtropical gardens. The villa, which offers sea views, is a protected historical building, as is its dazzling tennis court (built in the 20s) and enticing oval swimming pool. As such, despite being taken over by Rocco Forte in 2018, the hotel is full of idiosyncratic charm and character. Ask for a room overlooking the hotel's private harbour - it's ripe for superyacht-watching.

Halfway between a hotel and a series of self-catering apartments, Palazzo Sovrana offers smartly dressed suites in the heart of Palermo, most with private terraces that offer close-up views of the city's opera house, Teatro Massimo. A traditional Sicilian breakfast is served on the panoramic rooftop terrace, which doubles as a prime spot for evening cocktails and wine-tasting events.