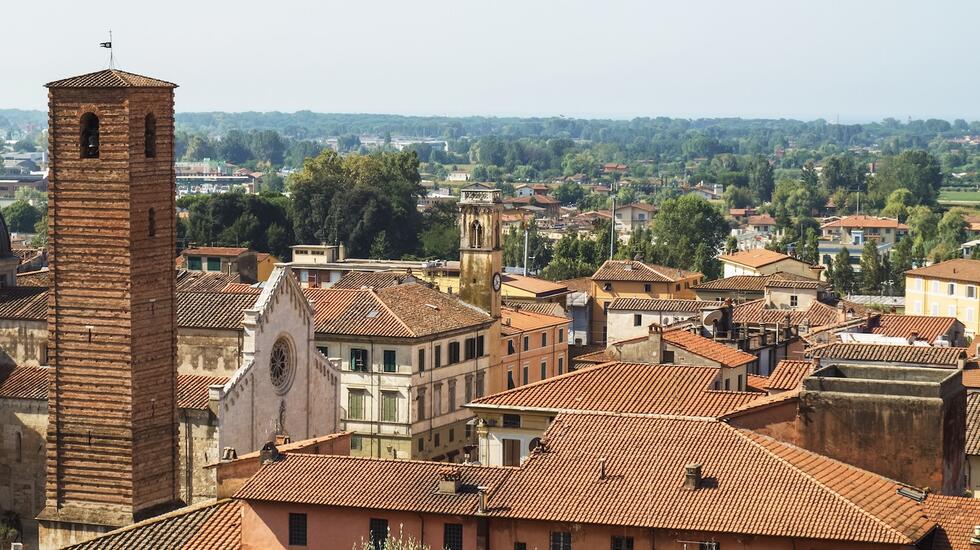 Often Often referred to as "the Athens of Italy" for the roster of international artists who have called its streets home over the years, this medieval town on the Versilia coast is a Tuscan anomaly. Caught between the green Apuan Alps and the sapphire-blue waters of the Mediterranean Sea, it was once home to Michelangelo, Henry Moore and Fernando Botero, and it's not hard to understand the place's magnetic appeal. Once you've pootled about its mosaicked streets, cycled out to the rippling hills on the town's periphery and sunk a bottle of local wine under the flickering light of a trattoria, you might consider staying a while, too.

Despite its allure, and its fabulous transport connections (Pisa is just half-an-hour away by car), Pietrasanta has kept its cool, remaining one of Tuscany's lesser-visited towns. We've tapped into our friends on the ground to build the ultimate guide, taking visitors from the Piazza Duomo - the town's frenetic central square, which thrums with laughter, the clinking of glasses and macchiato-fuelled chit-chat day and night - to the glamorous beach clubs, just a pine forest away. Now, pour yourself a glass of Moscato d'Asti and get planning.

Those who like chocolates on their pillows before bed, value a perfect turn-down service and are suckers for hand-painted frescoes can't do much better than this striking 17th-century converted palace. Spread across two stunning buildings, it offers old-school style in the most elegant (and least stuffy) way possible, tucked between arched windows, high ceilings and a seriously impressive modern art collection.

It might not be the most glamorous of hotels, but, perched on the corner of Piazza Duomo, Hotel Palagi gets a gold star for location alone. Book the attic room, Suite Mansarda, which comes with a terrace teeming with azaleas and orchids, as well as views out over the city's higgledy-piggledy rooftops.

Checkerboard floors, extravagant bed canopies that match the eccentric wallpaper and a Day-Glo-painted gramophone in the lobby? Count us in. A 19th-century palace transformed into a quirky hotel, this is where to stay if you're wanting a taste of Italian opulence paired with bohemian artistry.