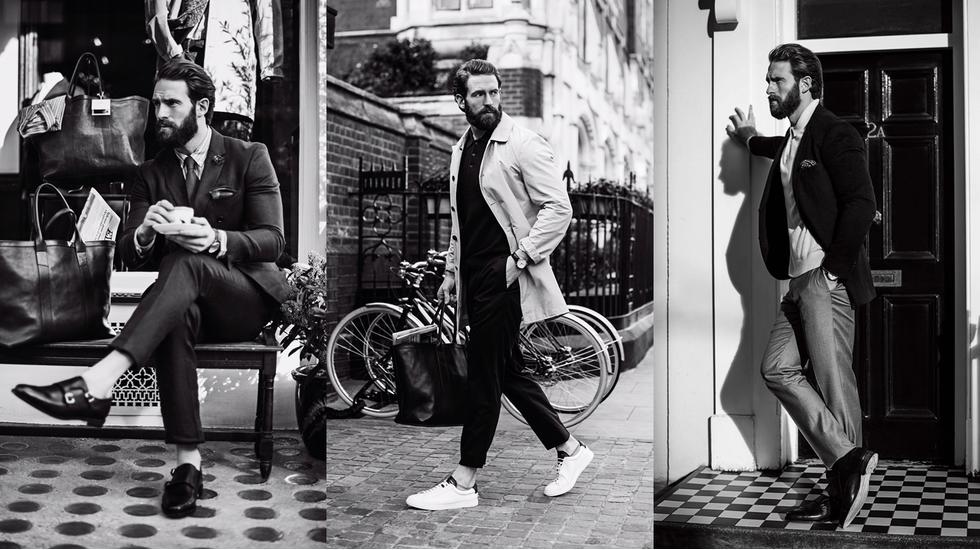 You You might recognise Craig McGinlay. He was the guy being lifted up by a crowd of jubilant Scottish sports fans in Glasgow's George Square in the final scene of IRN-BRU's Commonwealth Games 2014 commercial. You notice him immediately - not just because he is physically above everyone else - but thanks to a sculpted auburn beard (since gone), the muscular barrel chest, popping biceps and the moment he hoists a can of IRN-BRU triumphantly into the air. He couldn't be more Scottish, even if you stuffed a deep-fried Mars bar in his mouth and painted the St Andrew's Cross on his chest.

Once a fitness coach and conditioning specialist for Falkirk, St Mirren and Glasgow Warriors, within a year of the commercial's release Craig found himself modelling everything from suits to watches, his ruggedly handsome face splashed across magazines and billboards up and down the country.

Then came a starring role in Guy Ritchie's Haig whisky commercial alongside David Beckham, in which he and Becks sip scotch on the rocks in the Highlands (as you do). Then it was roles in various indie films about gangs, ghosts and Highland clans before re-joining forces with Ritchie to shoot Knights of the Round Table: King Arthur.

Craig won Breakthrough Star of the Year at the Scottish Style Awards and has even been touted as the next James Bond. "That's the dream," says Craig. "I look back at Sean Connery and his iconic Bond. I'd love to fill those shoes."

Having recently wrapped filming with Ritchie, Charlie Hunnam, Jude Law and Eric Bana, Craig flew to Milan for a yet another photoshoot. It's fair to say, it's been a busy few years for the model turned actor, as he climbs the ladder of stardom, jet-setting from set-to-set, bulbs flashing in his wake.

"At LCM (London Collections: Men) I must have attended 20 or more shows. I can't remember how many suit changes that involved, but it was intense. It's great fun though. I get around as much as I can in the four days. Then on the final evening I was invited to a dinner hosted by Ralph Lauren, so you can't just to turn up in any old thing for that. It was amazing. I felt so privileged to have been invited."

Much like David Gandy and male stylist Joe Ottaway (who Craig is often sat with in the front row at fashion shows), Craig turns to staple British designers to complete his wardrobe: Chester Barrie, Dunhill, Burberry, Belstaff. "The more I travel and witness men's style across the world, the more I think that Britain is up there with the best in terms of style."

But who inspires him? Having worked with some of the best names in fashion, film and sport, where does he look for sartorial advice? "Well, Beckham, obviously. Even before I met him I saw him as someone inspirational. His attitude towards work, training and style. And, important to a Scot, he enjoys good whisky."

Having grown up in Paisley, just outside Glasgow and on the edge of the Gleniffer Braes, Craig moved to London in 2014 and was soon signed by Storm Model Management and Independent Talent Agency. "I love London. It has such a buzz. It encourages me to be competitive and to chase my acting dream."

"My first holiday was probably to Kilconqhuar in Fife, near St Andrews. I remember renting bikes and playing tennis with my brother and sister. We played crazy golf on the St Andrews Himalayas course as kids. Growing up across the border has definitely given me an adventurous side and I'm drawn to the outdoors. We filmed King Arthur in Snowdonia and were very lucky with the weather. I really enjoyed being away with the cast and crew, being able to train outside and enjoy meals with the team. It was a good opportunity to get to know each other and to spend time in Snowdonia."

Travel now plays a major part in Craig's work. He lives a life run by itineraries, flying all over the world from one shoot to the next. "Filming with Ritchie and Beckham in Glen Affric [close to Inverness] was unbelievable. I was driving a Land Rover Defender through a creek and there was a helicopter with a camera on the front following me. It was like being part of an action movie and now I'm definitely looking to do more stunt filming."

Following that he returned to London, then to Snowdonia, then it was off to film at Warner Bros. Studios (in Hertfordshire) before flying to LA for castings, followed by a photoshoot in Milan. "I met Tom Cruise at the Warner Bros. Studios earlier in the year. He's definitely another inspiration of mine. A great actor who does his own stunts. Working in films has meant training in horse riding, sword fighting, martial arts, boxing and jujitsu... It's all brilliant." And brilliant is how life must be for a fitness coach turned actor. Perhaps we should all start drinking IRN-BRU.

Knights of the Round Table: King Arthur is scheduled for release in spring 2017