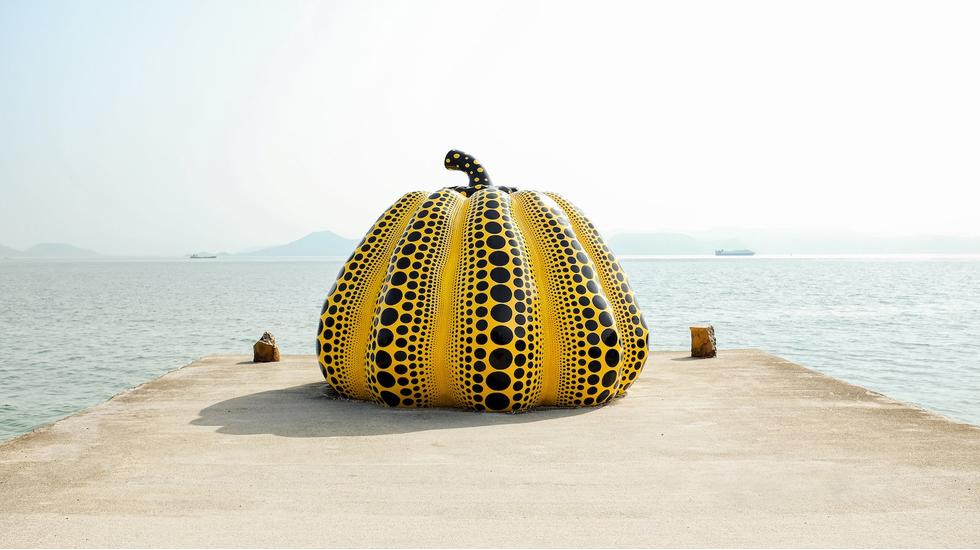 Naoshima Naoshima is a small island around two hours from Okayama with a population of not much more than 3,000. I'd wanted to visit for a while and we managed to steal a day to escape there after two weeks travelling between Tokyo, Kyoto and Osaka. Known as Art Island for its contemporary galleries and large outdoor sculptures, you'll find Monet's Water Lilies in Benesse House museum and Yayoi Kusama's famous yellow pumpkin along the shoreline. Art aside, the island is a beautiful place to be, with white-sand beaches and its own little microclimate, 26˚C in March.

We hired electric bikes and spent the day cycling around, stopping every few yards to take photos. It was a Monday, one of the two days that pretty much everything closes, an annoyance, but it also meant it felt like we had the island to ourselves. And a little coffee shop and a beach shack by the port were open, the latter serving rice with fried eggs and crispy chicken, full of umami and spice. Benesse House was the only gallery not closed for the day, and it was the one space we were most looking forward to.

Japan's celebrated architect Tadao Ando designed the museum based on the concept of "coexistence of nature, art and architecture", and exploring the gallery, we were struck by the juxtaposition of the harsh concrete lines of the buildings against the backdrop of wild nature and the Seto Inland Sea. Circumnavigating the island on our bikes only took a few hours and we returned to the mainland by ferry feeling we'd experienced a slice of harmony, a small respite from an otherwise busy and frantic trip.