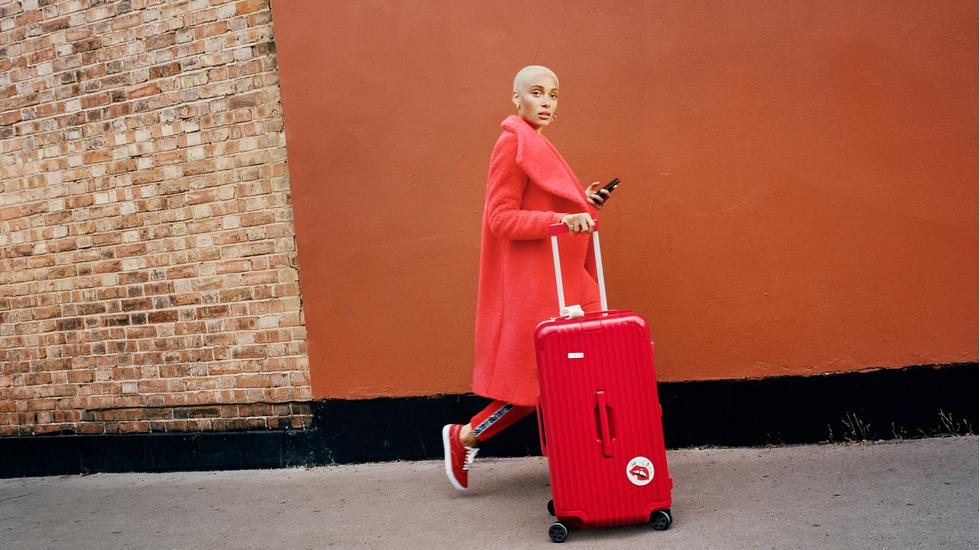 RIMOWA RIMOWA is changing the way we think about travel. Hector Muelas is helping us guide those thoughts. Previously the creative director of marketing communications at Apple, the Barcelona-born conceptualist then joined luxury goods conglomerate, LVMH, as global vice president of content and creative (his CV also boasts partner at Vice and creative at Wieden + Kennedy). It's safe to say that Muelas is an ideas person. His latest posting as chief brand officer at premium luggage brand, RIMOWA, alongside CEO Alexandre Arnault, is proving his most mesmerising role to date.

Redefining travel since 1898, RIMOWA's 120th anniversary marks a metamorphic moment for the brand. The Cologne-based luggage company has seen a lot of change across three centuries, from the first aluminium trunk created in 1937 to the inception of the brand's iconic groove (inspired by the first all-metal aircraft) in 1950. Yet RIMOWA's philosophy has always stayed the same: "Expert travellers need expert travel solutions."

Muelas seems more than equipped to provide these solutions to a youthful band of jet-setters - a new clientele for RIMOWA. Refreshing the brand with a modern ID, since joining Muelas has been busy creating a culturally relevant label that is as cool as it is clever, alongside RIMOWA's CEO Alexandre Arnault. Responsible for some high-stakes social media collaborations - namely those with street brands Supreme and Virgil Abloh's Off-White - Muelas' and Arnault's approach has viral appeal. Using contemporary colours, new materials and zeitgeist monograms while maintaining RIMOWA's trademark aluminium grooves, RIMOWA luggage has become travel companions to model Adwoa Aboah, tennis player Roger Federer, Japanese chef Nobu Matsuhisa and others of their ilk. It's clear that the long-revered label is having a very modern moment.

Going beyond his remit of creating a functional travel product, Muelas is playing an integral role in shaping a new approach to travel. Inspiring clients to travel with purpose rather than as a distraction, and inviting others to join this community, he is most certainly a man on the move - and everyone else is just trying to keep up.

What would you like to achieve during your time with RIMOWA? What is the key message you want to get across?

We're building a brand and an important step towards that is communicating RIMOWA's purpose and values. We are lucky enough to have 120 years of stories and insight to draw upon, and we want to make that applicable today. The goal is to be a culturally relevant brand that has a meaningful role that is expressed in subtle ways. Looking into the history of RIMOWA it has always catered to purposeful travellers - those who travel in order to achieve - and we want to continue that legacy while helping our customers go about building their own.

Do you think luggage is replacing what handbags used to be, serving more than its functional purpose?

Yes, absolutely. Luggage has gone from being a practical object designed to carry your things to an important symbol - that could be cultural, personal or about status. In a time when there are millions of travellers, people want their suitcase to say something about them. That's why it is important to have a brand with a purpose; we want our customers to feel like they are entering a community rather than simply buying a product.

You previously worked at Apple, which has become the first trillion dollar company in the world. Do you think that a luggage brand like Rimowa could become a similarly cult-ish brand?

I would argue that RIMOWA already is a cult brand. It's definitely a community brand that has been driven and built by an influential group of people for the last 20-30 years, and that continues to be the case today. For me, it's not as important to be as big as Apple but to be as meaningful as Apple. That's a beautiful ambition to have on my hands.

The short answer is Barcelona but I'm a little bit American and a little bit German, and have lived in many cities. Today, I know very few people who 100% identify with a culture or a place. The way we travel and the fact that we travel so often means we establish emotional connections with places, and that's what makes up our identity.

Could you tell us a bit more about that, and how you think the modern world is affecting this change?

I don't think that nationalities or religions are cutting it anymore; it's about mindset. You might be from a small town but identify yourself by liking or sharing a certain set of cultural values - be it music, behaviour, sexual orientation, aesthetics - and that is how you begin to define yourself. The internet has allowed us to build a new sense of belonging in the same way travel has; they both allow us to discover the new things and new references that we can identify with.

What are some of your favourite places and why?

Tokyo will always be a very special place for me. It taught me a lot about aesthetics, consumer behaviour, user experience and the possibility of finding a balance between looking forward while respecting the past. I really like the Balearic Islands too, and Menorca is a place where I would like to grow old.

Airports are interesting because if you look at the statistics people are choosing to spend longer in them these days; it's not about killing time anymore. They need to be more consumer-centric - why not make them experiential or about the culture of travel? Travel behaviour has changed and I don't see the hotel industry or airports upgrading to meet this demand. Why don't all hotels put USB chargers next to your bed? Why am I not able to connect my Netflix account to the television in the hotel to continue watching it on the plane? It's in the details.

Where do you draw your inspiration from?

Always asking questions, but mostly by exposing myself to things that make me feel a bit uncomfortable. Hanging out with people or going to places that ordinarily I would not be attracted to is a really good source of inspiration. I recall a quote along the lines of: "In order to get better you need to recognise that you're an idiot" - and that really strikes a chord with me.

What SUITCASE do you use?

My favourite suitcase is the original cabin size RIMOWA in black. It's always cabin size - I can't stand checking in anymore. I really like spending time in airports, and I'd rather enjoy it than stand around queueing.