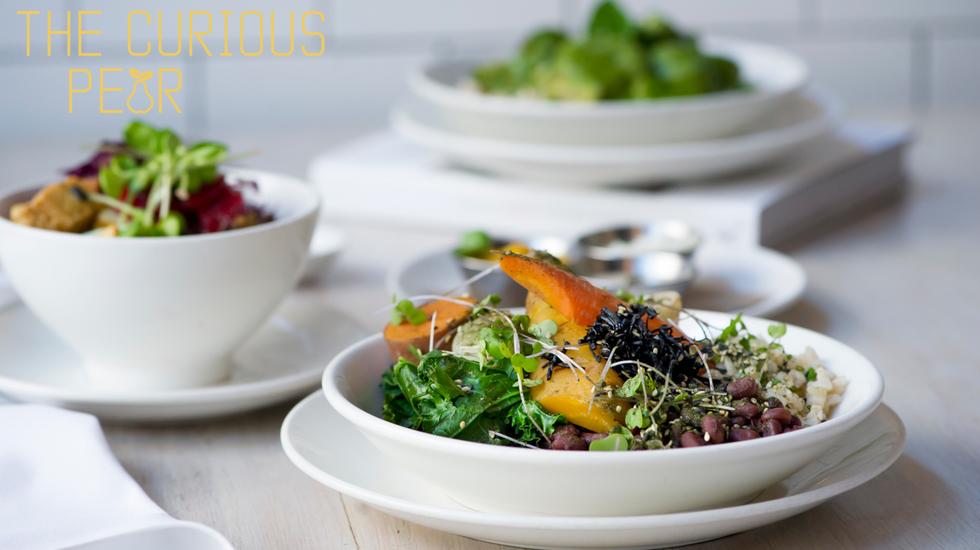 In In our humble five weeks in New York, we've heard the phrase 'farm to table' thrown around a lot. We hear it in bars, read it on menus, and see it up and down the aisles of every organic deli-mart the city has to offer. The Big Apple is famous for its food fads, but this one is particularly noticeable, with chalkboards across the city proudly proclaiming their partnered farm and their vegetable of the season for all to see.

So when did this latest (and seemingly unwavering) trend begin? The Fat Radish, which opened its doors in 2010, has long been noted as the pioneering restaurant of New York's 'farm to table' movement. The Lower East Side's gastronomic star is the brainchild of best friends Phil Winser and Ben Towill. Together they also run the design agency Silkstone, as well as two newer restaurant projects, The East Pole and The Leadbelly (the latter serves exceptional cocktails and oysters, right across the street from The Radish). The two seem to have been bound for creative partnership from the beginning. "We have a very similar philosophy about most things," Phil tells us, "so when it came to both food and design this outcome was the most natural one." Together they put their passion for sustainable, hands-on food into creating a restaurant that serves fresh, healthy fare in a warm and inviting environment. "Growing up in the English countryside, it was always about food in my family," says Phil, "and not only the food itself but the occasion of coming together and eating."

Though the rise of the Radish seemed to coincide with an anti-fast food mania in the New York food world, setting a trend was never Ben and Phil's intention, and a label is the last thing they want. "We don't call ourselves a 'farm to table' restaurant" Phil tells us, "we don't call ourselves an 'organic' restaurant either. We don't do it to be fashionable, we don't talk about it; we just do it."

We headed to The Fat Radish on Orchard Street, where a horde of restaurants, coffee shops and bars have sprung up in the last couple of years. The interior, much like the food, is all about the beautiful and the basic, awash with white brick walls, sturdy metal framing and a scattering of greenery. We sampled the vegetable green curry with coconut milk and brown rice, and The Fat Radish Bowl; a macrobiotic vegetable dish with adzuki beans, carrot-ginger and tahini. We also chatted to Phil Winser (Ben Towill was off hand-picking herbs in some upstate farm, we can only assume) about spearheading the most wholesome eating trend in recent times, whether he likes it or not…

Firstly, we’ve got to ask about the name.
I used to live in Notting Hill, and there was a pub at the end of the street called The Fat Badger. When we were opening this place we found ourselves being pigeonholed as a gastropub, both of us being British. That’s not what we are at all, but everyone always feels the need to label things. So we decided to play on that a bit, and our menu focuses on seasonal vegetables, so we came up with The Fat Radish. You don’t forget a name like that. We didn’t want to take ourselves too seriously. A lot of restaurants do. There are 20,000 restaurants in Manhattan, three open a day and two close a day. It’s extremely competitive. So we wanted to have a name that was a bit different and that would stick in people’s minds.
I’ve read that both you and Ben are self-taught cooks, how did you go about learning?
I’ve always been more involved in front of house, design and curation. Ben is a self-educated cook and has worked astonishingly hard at some amazing restaurants. I’ve just always been obsessed with food. And I’ve always really drawn inspiration from travelling. I always felt that wherever I was in the world, when I was eating with people it didn’t matter if I didn’t speak their language, eating together is like having a conversation. That’s always been very powerful and stirring to me. You can learn everything about a culture through their food.
What’s your favourite cuisine?
I love the simplicity of Italian cooking. The Italians were the pioneers of ingredient-driven food. I’m obsessed with Japanese food, too. It’s so fresh and balanced. We’re very inspired by macrobiotics and macrobiotic cooking, and Japanese cooking uses a lot of that.
We’re hearing the expression ‘farm to table’ a LOT in New York, would you agree The Fat Radish was pioneering in this movement?
I don’t know about being ‘pioneering.’ I have a problem with this idea of food being for fashion. When we were coming up with The Fat Radish there did seem to be this huge disconnect in people around us between what was being eaten and where it came from. People were more concerned about where they were eating than what was in the food itself. For us, that just didn’t make sense. We wanted to create an environment where the quality of the produce was what was important.

You have this huge list of purveyors, what do you look for when sourcing produce?
We always joke that the New York farmer’s market is the most competitive place in the world, because they’re all selling the same things. We have suppliers that have become like family to us over the years, and as long as their quality stays the same we stay committed to them.
Tell us a bit about Silkstone.
The name Silkstone came from the idea of the two components that make up the hospitality world. There’s that sexy, beautiful, silky front of house scene you see when things are up and running; the candles, people all dressed up, the mood of the occasion. And then on the other hand there’s the every day; getting up at 4am, going to the farm in the middle of winter to look after the vegetables and sheep, the chefs who are in a basements in the sweltering heat working all day to produce one thing…that was the idea of the name. Anything with great integrity takes a lot of time to create. And that’s never truer than with food. Luxury and quality are things that just can’t be rushed. There is nothing more luxurious than cooking and eating, if it’s done well.
How do you draft your menus, what inspires dishes?
Silkstone and The Fat Radish have never been about the individual. It’s about coming together as a collective, and menu ideas are born from this. Dish ideas come from everywhere; from every day life to things I’ve eaten at dinner parties to things I’ve seen on other menus. We begin with the seasons, have a look at what is at its freshest and then the chefs have a play around with flavours. The ideas come about very organically (no pun intended).
And finally, if you could have anyone walk into the Fat Radish who would it be?
It would be my godfather. He was a huge inspiration to me growing up. He was a chef and really introduced me to this philosophy of clean, seasonal, healthy eating. He had a wonderful little farm with a vineyard, which I used to work on as a kid. His wife used to cook these incredible six-course feasts. We’d come in from a day on the farm covered in mud and eat this luxurious meal of beautiful fresh produce with amazing wines. That’s where it all began for me, really. He was my biggest inspiration.