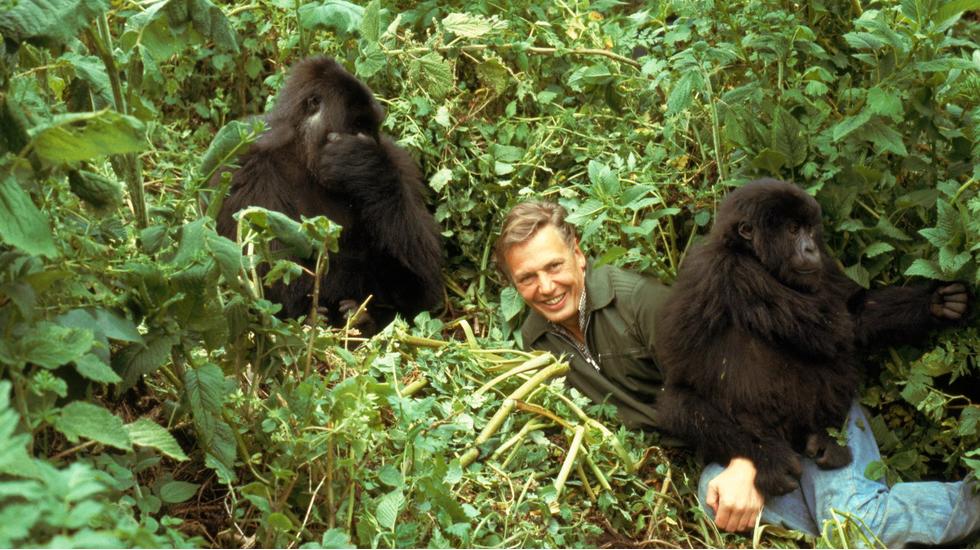 As As the nights draw in, we're turning to grandfather of the natural world Sir David Attenborough to transport us to any place other than increasingly cold, increasingly dark London. In the name of research, we've recently binge-watched every single Attenborough episode since 1979, to bring you the best moments from grooming gorillas to those racer snakes. With a voice like velvet - and plenty of dramatic pauses - there's really no one we'd rather spend our Sunday nights with.

Nearly 40 years on and Attenborough's encounter with a group of mountain gorillas in Rwanda is still one of the nation's best-loved television moments. It was obvious back then David Attenborough was a total natural, appearing nonchalantly amused as the apes removed his shoes and fawned over him while he tried to explain their grooming habits. The landmark 13-part series, which Attenborough wrote and presented, was shot in over 30 countries and pulled in an audience of over 500 million viewers, marking the beginning of a worldwide obsession with all things Attenborough.

If you skip straight to the final scene of this series, we won't blame you. Confirming his status as a bona-fide explorer, Attenborough experiments with gravity and finishes the episode upside down. Need we say more?

The camera team spent three years on standby in a bid to track the migrating pattern of blue whales for this underwater exploration. Thankfully, they were were handsomely rewarded for their thumb-twiddling as the camera-shy dumbo octopus made a debut appearance alongside a hairy angler fish, while hammerheads gave us a real-life Shark Tale moment as they descended upon a Pacific seamount. The only drawback to to this series is knowing more about the beasts that lurk in the depths, making us slightly hesitant about dive-bombing into the ocean on our next holiday.

Where else would you find Sir David saying "boo" to an unamused sloth? The Life of Mammals is arguably one of his finest works yet is often very overlooked. Infrared technology was used for the first time and 10-minute bonus features show the lengths to which the crew go to capture footage - including a 100-metre zip line through the jungle canopy. Leapfrogging from the Arctic to Australia, this series provides a reel of lighthearted Attenborough moments, including lemurs using his shoulder as a lookout and an impressive impersonation of a wolf howl.

The first TV series to be screened in HD, you'll tear through this boxset quicker than the ever-elusive snow leopards it features. Attenborough's characteristically dramatic predator introductions are in all the right places, punctuated by coo-inducing scenes involving newly hatched sea turtles and baby humpback whales. Don't be lulled into a false sense of security; you'll be brought back to earth with a bump as you watch sinister cordyceps funghi devour their victims alive.

It has all the components of a compelling Sunday night drama; polar bears sneak off for some alone time, villainous orcas toy with their prey and emperor penguins lighten the mood with a belly-flopping return to the North Pole. Topping it off are the Adelie penguins who have turned to a life of crime. With his knowledgeable whispers, Attenborough takes us across the slowly shrinking continent in a seven-part series that drives home the very real effects of global warming.

Journeying into one of Earth's most unforgiving continents was never going to be cosy viewing. In this emotionally charged expedition we see giraffes fight to the death and a baby elephant die of dehydration. Gathering the incredible animals that roam across Africa like the opening scene in The Lion King, Attenborough warns "the stakes are high" - and so is our pulse as we watch a lizard try to steal dinner off a lion's face.

Returning to Australia after several decades, Attenborough revisits what he describes as "the most magical place on Earth". In a joyfully nostalgic throwback, we see black-and-white clips from 1957 in which a fresh-faced Attenborough rows towards an untouched Lizard Island - which today teems with research boats. The beauty of the barrier reef has never been captured so perfectly, with an "underwater firework display" - something about synchronised coral reproduction at full moon - leaving us totally blindsided.

"Oh my god, did you see that?" squealed an entire nation (and, indeed, the world) as we witnessed an iguana defy a murderous group of racer snakes in the first episode of Planet Earth II. What was the talk of the office the following day set a high standard which didn't slip throughout the series, which was filmed in 40 different countries over 2089 days of shooting. Pulling on our heartstrings as penguin chicks took their first steps, providing us with comic thrills as bobcats face planted and drawing a bigger audience than the X Factor finals, this is ideal sofa Sunday viewing.

*Spoiler alert* ahead for the first episode of the brand-new series which aired just last weekend. It didn't disappoint, getting the nation in a flap as a young tern tried to escape the gaping mouths of giant trevally fish. It was that jaw-clenching racer snake moment again as the tern narrowly escaped with its life - and feathers - in tact. Japan's mysterious waters introduced us to trans fish, bottlenose dolphins took the cameramen for a ride and we were left baffled when killer whales who called off a dolphin hunt because they "knew each other". Turns out we're rather looking forward to those long winter nights.