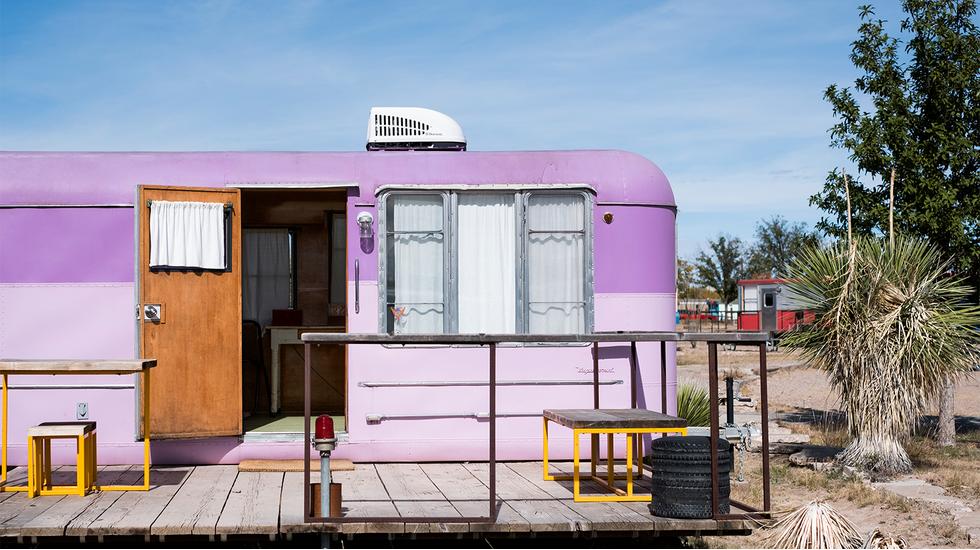 This article appears in Volume 22: The Design Issue

Like Like most people, we had only ever heard vague whisperings of Marfa ("You mean Martha?") in films and in song lyrics, or flashing across the odd magazine spread. One of the Lone Star State's most cherished secrets, Marfa remains as mystical and impenetrable as the desert in which it lies.

Seven hours into our drive from Austin, with mile after mile of biscuit-coloured land rushing past, it seemed unfathomable that we were on our way to a town where some of the world's most legendary artists have carved out their careers, where iconic bands play to small crowds warmed by firepits, and the world-famous Prada installation stands watch over the highway.

Perched a mile above sea level in the Chihuahuan desert, this unassuming Texan town was transformed into a bohemian Mecca by the artist Donald Judd when he moved here from New York in the mid-Seventies. To him, it was the most beautiful place on Earth.

Judd's name is still plastered across the town, but his biggest mark was left in the Chinati Foundation, a contemporary gallery housed inside an old aeroplane hangar. In the grounds, where visitors wander freely, rectangular concrete blocks litter the heathery grass in stark contrast to the wide plains beyond, which are interrupted only by the smoky Chinati mountains.

It is hard not to feel inspired by Marfa's gold-flecked backdrop - a landscape that the artist Georgia O'Keeffe dedicated years of her life to capturing.

Arriving just in time for dinner on a Friday evening, we parked on the town's main street, Highland Avenue, and nodded to a man in a Stetson observing us from a bench outside an old barbershop. Down the road a train shot down the tracks with the organ-like groan that we would soon come to recognise as the comforting background music of Marfa.

We stepped from the silent street into the first restaurant that we saw. Stellina serves an ever-changing menu of Tuscan fare, with guests huddled around a wooden bar beneath concrete ceilings and soft lighting. It's the kind of place that you'd expect to find in Williamsburg or in Shoreditch, crawling every weekend with a clientele of creatives. We settled down for one of the best meals of our trip, chatting to the bartender about what people get up to on a Friday night. "There's only one option, really," he told us. "The Lost Horse Saloon."

It's true that the options are limited in Marfa - that's part of its appeal. It is a town of gas stations-turned-art galleries and empty, dusty cornershops selling crystals and handmade linens. Locals get their coffee from Tumbleweed Laundry - the only café that is open daily. They dance at the same saloon, drink at the same bars and shop from the only grocery store in town.

Sipping their beloved Topo Chico water, they opt for crunchy flatbreads at the sunny café-garden La Playa, or wolf down Mediterranean lunch bites from a vintage bus at Food Shark. At El Cosmico travellers stay in one of a rainbow fleet of reworked vintage Airstreams, some with open-air rolltop baths. Each year this legendary campground plays host to the Trans-Pecos Festival of Music + Love, where artists such as Jenny Lewis and Wilco sing to the cold night air.

Time melts away deliciously in Marfa, leaving space for art, creativity and contemplation. Tori Raba, the owner of the Raba vintage shop, says of the town's slow pace: "We call it the Marfa minute. We measure time differently here."

It is hard not to feel inspired by Marfa's gold-flecked backdrop, the endless horizon brushed with strange cloud formations and sunsets the colour of stewed fruit - a landscape that the artist Georgia O'Keeffe dedicated years of her life to capturing. After days of waking up late, visiting galleries and talking to locals we realised that Marfa's charisma comes down to its endless contradictions. It is isolated yet completely open, modern yet stuck in a bygone era - empty, but intoxicatingly full of life.