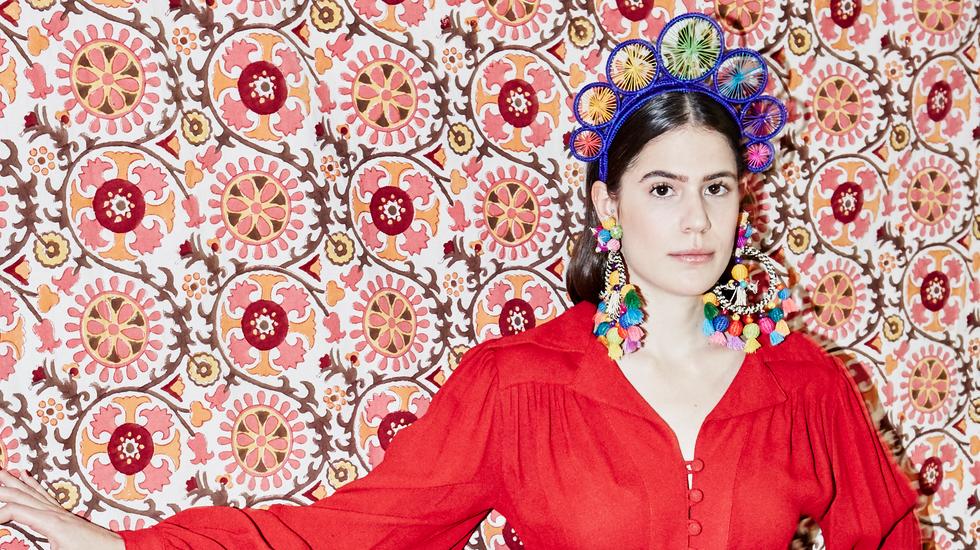 While While a multi-coloured mirror-mosaic headpiece isn't something you'll find in most people's closets, Lucia Echavarría of Magnetic Midnight is certainly making a case for them being a new staple. From pearl tiaras worn for holy communion ceremonies to the flower wreaths gracing the crowns of influencers at Coachella and the padded Renaissance-style headbands reemerging onto AW19 runways, headpieces are undoubtedly back and drawing a crowd because, well, who doesn't love some drama?

Magnetic Midnight is the brand to know when it comes to taking the bijoux a tête from formality to street - without sacrificing any of the pomp and frills. Outrageously extravagant in celestial jewels and adorned with intricate patterns and hand-crafted in bold silhouettes, a Magnetic Midnight piece doubles as objet d'art as well as it-girl accessory. It makes sense when you learn that Lucia spent time at Christies, the Musée des Arts Décoratifs and the Guggenheim. Captivated by cultural customs and ping-pong wedding dresses, Lucia's designs combine a love of tradition, costume and a penchant for OTT flair.

Far from shy and demure, Magnetic Midnight creations have crowned the temples of style aficionados Noor Fares, Alix du Vernoy, Katrina Razon and Roya Sachs. Here the Paris-born, New York-based, Colombian designer talks us through her favourite pockets of Colombia in New York, the allure of costume, her go-to Parisian boutiques and finally how to pull off a headpiece with a confidence that'd make Blair Waldorf proud.

The designs of Magnetic Midnight are ethereal. How did the brand begin?

I came up with the idea during a trip to Iran; I had just finished an internship at the Guggenheim after graduating and was considering costume designs as a way to combine my love of art, history, culture and design. At the time I was also thinking of a costume that I wanted to make for a summer party I had coming up and, when in Shiraz I visited the most beautiful mosque entirely inlaid with mirror mosaics; the elaborate patterns and the architecture of the doorways struck me with the idea to make a headpiece from mirrors. I started drawing the possibilities and during the process I came up with so many different ideas. I realised that headpieces would be a perfect way I could explore and develop my love of costume. This evolved into the idea of creating a brand that would focus on evening-wear accessories and blur the line between costume and fashion.

What is it about costume that draws you to it and why headpieces specifically?

I've always loved dressing up. Costumes are a playful vehicle for self-expression and imagination; they have a certain transformative and escapist power. In particular, I've always been captivated by ethnic dress and adornment, beautiful textiles, wedding and religious processions, celebratory dances and carnival - that kind of festivity and extravagance, the ritual of dressing up to mark a significant celebration. On all these occasions headpieces play a seminal role; they're used extensively throughout history and across cultures. They're a canvas with endless possibilities. Wearing an adornment on your head can be elegant or fanciful - or sometimes both at once.

What's your first memory of fashion or costume?

Visiting Marie Beltrami's studio in Paris when I was eight. She is a French stylist and amazing costume designer and I remember playing dress up in all her creations, including bird cage platforms and a wedding dress made entirely from ping-pong balls.

What does the name Magnetic Midnight mean?

Magnetic midnight is the time of day when the magnetic poles align between the Sun and the Earth; it's said to be the optimum time for viewing auroras. The idea for the brand name originated from this incredibly sublime, almost magical and rare natural phenomenon. Likewise, my Magnetic Midnight headpieces shine best and attract all bystanders during the late hours.

Describe your creative process; it is always the same or does it differ from piece to piece?

It changes depending on the starting point of inspiration, whether that comes from a particular material, colour, image, idea or theme. I think of it a lot like a collage, where the blank canvas is the initial frame. From there I assemble materials and start combining them; I never draw or sketch the pieces. It's an organic process of layering and adding, subtracting and composing elements until it feels complete.

How would you describe your brand aesthetic to someone who's never seen any of your pieces?

Who is the Magnetic Midnight woman?

Often the headpiece ends up being defined by the person wearing it. I think the Magnetic Midnight woman is someone looking for a quality, statement piece, a piece you buy to collect or in the hope of passing on to your daughter.

Why did you choose New York as your brand's base?

I love the energy here and the fact it's so eclectic - plus, it's an ideal midway point between Colombia and Paris.

Norway or Iceland to see the Northern Lights.

Where do you find inspiration for your designs?

It can be the composition or colours in a painting; the texture of a material; the structure or history of a building; the geometry in nature; literature; popular culture; everyday objects. I am probably most inspired by my travels and new places - my last collection, Arabesque, was conceived after a trip to Uzbekistan.

Your favourite place in the world?

Do you go back to Paris often? What boutique shops do you rate in the city?

I try to go back to Paris as often as possible. I love going to the Resee showroom for the best vintage, 7L bookshop for the best selection of art tomes and Sennelier for the most beautiful painting and drawing supplies.

Astoria has the best and most authentic Colombian food. I love El Basurero, it's a really fun restaurant where dinner often turns into a local block party. I also really like Palenque - a food truck that serves amazing arepas (it's opening a permanent location in Williamsburg soon).

Secret spots in New York for some colourful inspiration…

Whenever I'm in need of inspiration, I go to the garment district and walk around all the shops selling fabrics, trimmings, buttons and ribbons. Another not-so-secret spot is the MET. Everytime I go, I discover a new corner or object I hadn't noticed before.

Finally, your best tip for pulling off an elaborate, extravagant headpiece…

Always dress from the top down.