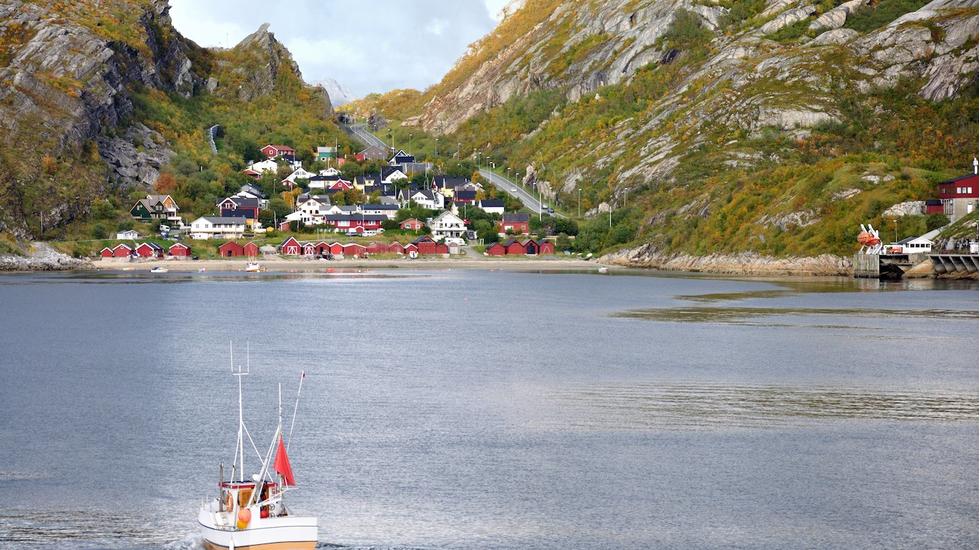 Right Right at the northernmost tip of Norway's railway system, Bodø is the gateway to the Arctic Circle. Almost entirely destroyed after a Luftwaffe bombing in the Second World War, the city has been gradually rebuilt as a cultural hotspot in Nordland county. Shortlisted as one of the European Capitals of Culture for 2024, Bodø is gradually building up its cultural repertoire. The annual calendar is packed with festivals such as the Nordland Musikkfestuke, Parkenfestivalen and the Bodø Hardcore Festival - and be sure to visit cultural centre Stormen, which houses a library, concert hall and theatre.

One for nature lovers, Bodø is brimming with flora and fauna. Known as the Sea Eagle Capital, the city has the world's most dense concentration of white-tailed sea eagles. Drive along the Kystriksveien Coastal Route on Highway 17 to witness the region's glacial beauty. It's the perfect basepoint for expeditions into the dramatic landscape, glimpsing the Northern Lights and escaping into the arctic wilderness.

Spend days wandering through the town centre to admire post-war architecture, stumble upon street art and chat to fishermen and locals. Pop into Bodø Cathedral (built in 1956) and follow with a trip to the Bodin Church to compare - just outside the city centre, this church dates back to the 13th century.

Immersing yourself in Nordic history. Head to the Port of Bodø to catch a glimpse of the Nyholmen fortress and lighthouse across the water. Dating back to the 19th century, the fort was once abandoned and stood empty, eerily overlooking the city. More recently, it was rebuilt as a tourist spot. Too spooky for you? Instead, visit Kjerringøy Handelssted. The country's most well-maintained trading posts, these authentic Norwedian buildings make for an intriguing visit.

Someone eager to spend all day outside - Bodø has a great expanse of nature to explore. Hike through Sjunkhatten National Park or opt for a trek - Skånland's coastal pine forest are ethereal, Børvatnet has birch trees and orchids, and Bliksvær is the ideal route for twitchers keen to spot some birds. Alternatively, ramble over the mountains of Børvasstindene.

Nevertheless, Bodø's natural pièce de résistance is undoubtedly Saltstraumen, the world's strongest maelstrom. Visit to witness the mighty whirlpools caused by water rushing in at speeds reaching 20 knots. If history is more your thing, stop by Bodo's famed archaeological site where evidence of human habitation dating back 10,000 years has been found.

Go in March to see Saltstraumen at its strongest point.

As is expected for such a small place, hotel choices are limited. Book into Thon Hotel Nordlys to stay right on the harbour, just a 10-minute drive from the airport.

Travellers looking to escape into the wilderness.

This Acne Studios fringed wool scarf will keep you toasty in sub-zero temperatures.

Flights to Bodø airport take just over five hours from London, via Oslo or Gdansk.