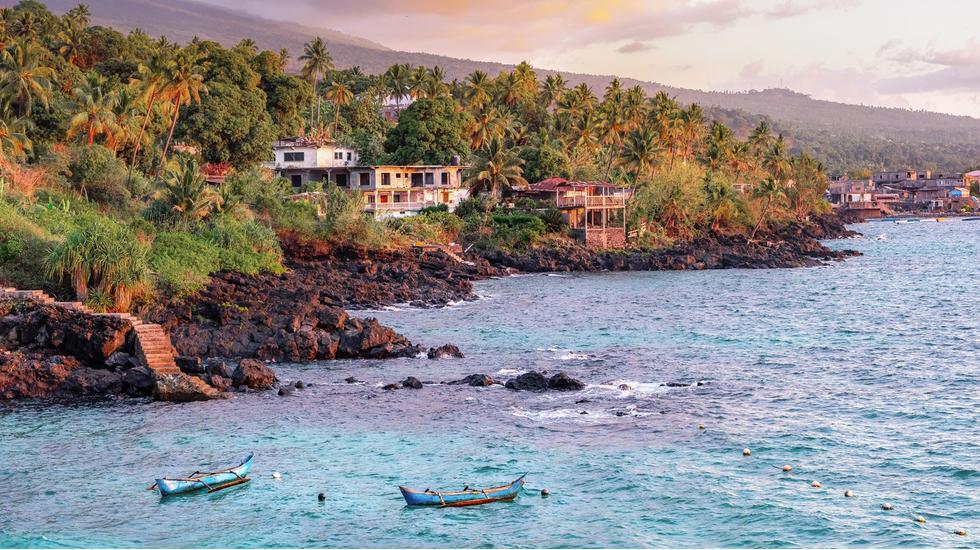 Often overlooked in favour of nearby island destinations such as Mauritius and the Seychelles, this little archipelago offers just as much charm and allure as the any of the African isles. Named after the Arabic word for "moon", Comoros is just as magical as its title suggests. Temperatures hover between 20ºC and 30ºC throughout the year, and the sparkling Indian Ocean laps against peaceful, palm-fringed shores.

The major islands - Grande Comore, Mohéli and Anjouan - are the most-visited of the archipelago. Grande Comore is the largest, on which Comoros capital Moroni provides reason in itself to travel to these isles. Walk around the winding lanes of Moroni's lively medina, where houses are decorated with carved doors and skyline views are punctured by ornate minarets. Head south to reach Mount Karthala, an active volcano and popular trekking destination. If hiking isn't your idea of a holiday activity, make your way to Chomoni, a jaw-dropping beach complete with dark, volcanic rock, pearl-white sand and glistening water.

Rent a car or book a driver to show you the rest of the island. Drive north along roads lined with frangipani and baobab trees to reach Dos du Dragon, a collection of rock formations named after its resemblance to the scaly, spiked back of a dragon. Alternatively, take a dip in the Indian Ocean at Trou du Prophète - meaning Prophet's Hole, this beach is said to have been where the Prophet Muhammad hid from looting pirates.

While Grande Comore is the largest of the islands, its smaller neighbours should not be eschewed. Island-hop your way round the Comoros to truly experience the ins and outs of this mystical archipelago. Mohéli offers tree-covered fells and verdant national parks framed by beaches more populated by nesting turtles than people. Similarly, Anjouan prides itself on animal and nature conservation. Home to the endangered Livingstone fruit bats, it's the place to trek up mountains and catch a glimpse of these nocturnal giants before spending a few days lazing on the beaches of Moya, in the south.

Someone interested in ecotourism. The Comoros is known for its natural beauty, from dense forests and deserted beaches to volcanoes stretching high above the clouds. Explore mangroves and coral reefs at the beach or hike inland to catch glimpses of rare, colourful birds and strikingly magnificent reptiles (of which there are 12 endemic species).

Go in September. Dry season is between May and November, but September offers perfect temperatures of around 25ºC, and barely any tourists.

Nestled in the shadow of Mount Karthala, Retaj Moroni is comprised of vast grounds leading out towards the shore and a pool by which to laze during the day, making it the perfect base to explore the Comoros' spoils. Similarly, Itsandra Beach Hotel offers private bungalows with views across the ocean.

Someone looking for a serious island escape.

With all those postcard-perfect beaches at your fingertips, good swimwear is a must. This Ganni tiger-print swimsuit has a high-leg silhouette and a crisscross back, perfect for taking dips in the ocean or working on that tan.

Fly into Moroni airport after a stopover in Ethiopia's Addis Ababa.