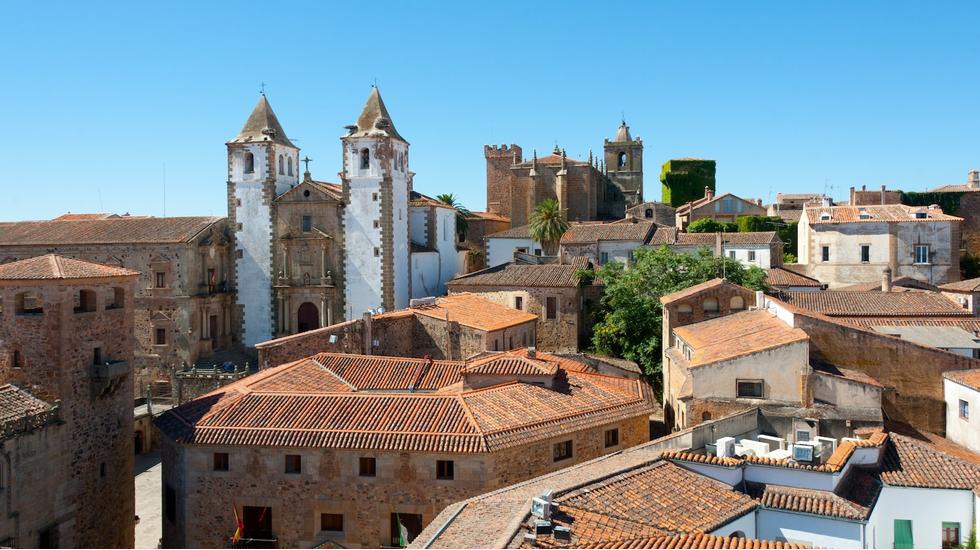 Extremadura is among Spain's best-kept secrets. With a rich heritage (and few tourists), it's a must for lovers of history, Iberian ham and… Game of Thrones.

North of Seville and bordering Portugal's Alentejo, this Spanish region has been kept under wraps by locals for centuries. Despite its many alluring qualities, Extremadura is one of the country's least-visited regions, making it the perfect alternative to tourist-filled city breaks and jam-packed beaches.

This remote region is made up of vast landscapes with craggy mountains, thick forests and sparkling lakes, interspersed with ancient Roman villages. Spend days traversing wildlife reserves - both Monfragüe National Park and Cornalvo Natural Park are great for hiking and birdwatching. Afterwards, head to the region's capital Mérida to replenish energy levels with plates piled high with Iberian ham and bottles of Spanish wine - Extremadura has the second biggest wine-making area in Spain, stretching across 80,000 hectares.

Stroll through Mérida's streets to admire Roman ruins from the crumbling Teatro Romano to the impressive Circo Romano, which is believed to have been built around 20 BCE. History buffs should also pay a visit to any of Extremadura's six Unesco World Heritage Sites. Our favourite is the walled medieval city of Cáceres, where the Old Town boasts a striking blend of Roman, Moorish, gothic, Italian renaissance and Islamic architecture. Round off the trip with a day spent at Orellana, Spain's only inland blue-flag beach. Located within a protected bird area in Badajoz province, the beach is a secluded place to doze off and catch some rays.

Extremadura's spooky ghost town. Only accessible by a single, pot-holed road, Granadilla has been vacant since the 50s when residents were forced to flee the village after it was pronounced a flood zone. Walk to Granadilla's towering fortress, which offers panoramic views over the city and surrounding reservoir.

A serious carnivore - Extremadura produces some of the world's best ham. Just outside the town of Montanchez sits an Iberian pig farm, where pigs are free to wallow where they please and are fed acorns. The resulting meat is called jamón ibérico puro de bellota, known for its smooth, rich taste.

Visit in July for WOMAD (World of Music, Arts and Dance) festival. Held in Cáceres since 1992, this free festival hosts music performances, workshops, street entertainment and fairs showcasing the best of international cultures.

Stay at Hotel Izán Trujillo in the centre of Trujillo. Set inside an old baroque-style convent dating back to the 16th century, the russet-pink exterior walls echo the original structure while original religious frescoes and vestiges are dotted throughout the rooms inside.

A Game of Thrones geek. Trujillo's Arab fortress in the province of Cáceres was used to film Casterly Rock, and the city's medieval streets set the scene as King's Landing.

Pair this Tide Slub cotton-jersey tank from The Range with these Valentino wool-and-silk crepe shorts for a breezy outfit that smoothly transitions from day to night.

Fly to Madrid from London in two and a half hours before renting a car to drive through Spain's rolling countryside, arriving at Extremadura in just under three hours.